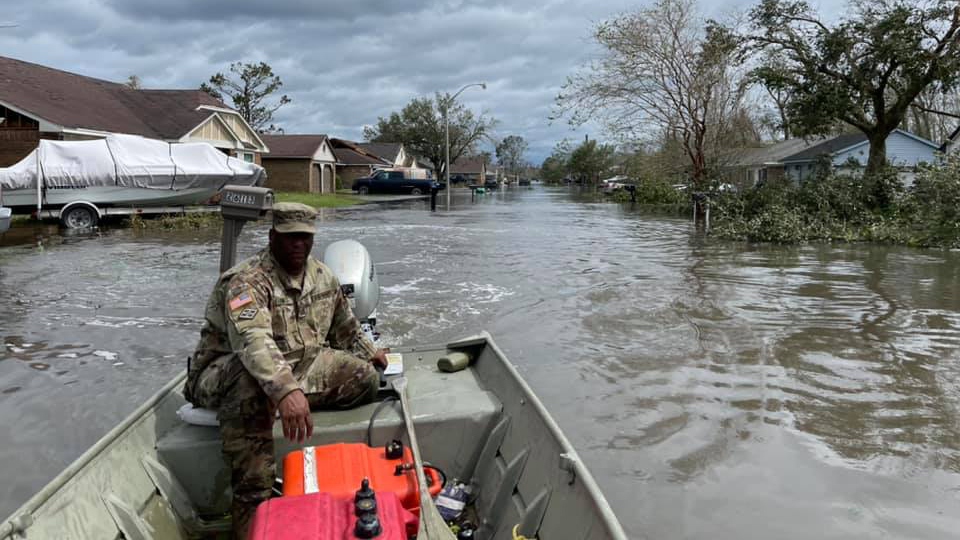 On August 29, 2005, Hurricane Katrina made landfall off the coast of Louisiana, triggering a slow-moving disaster as floodwaters breached the levees around New Orleans. Nearly 2,000 people were killed over several weeks, hundreds of thousands of homes were destroyed, and the city was left in ruins. Environmental scientists warned that Katrina was a taste of what was in store for the Gulf Coast region if climate change continued unchecked.

But greenhouse gas emissions have continued to rise, and exactly 16 years after Katrina, Hurricane Ida hit Louisiana as a Category 4 storm with winds of 150 miles per hour and up to 10 inches of rain, leaving more than 1 million households in Louisiana without power. The remnants of the storm traveled up the East Coast with flash floods killing at least 15 people in New York and damaging homes and public transport infrastructure.

While some media coverage celebrated the fact that the post-Katrina levees around New Orleans remained intact, the real story is that Ida’s behavior fits the profile of storms fueled by a rapidly changing climate, and no levees will be strong enough to provide enough protection against such relentless hurricanes year after year.

For Kali Akuno, co-founder and co-director of Cooperation Jackson, the wreckage of Ida is a surreal reminder of what he and others in the Gulf Coast region experienced 16 years ago. In a recent interview, Akuno shared that “it unfortunately brings back some painful memories.” As the former executive director of the People’s Hurricane Relief Fund (PHRF), which was founded in the aftermath of Katrina, Akuno has experience witnessing inept government responses to such disasters.

When the Federal Emergency Management Agency (FEMA), under President George W. Bush’s leadership, spectacularly failed to address the needs of Katrina’s victims and survivors, mutual aid groups like PHRF stepped in. Today, the same appears to be happening, and Akuno’s newer, Mississippi-based organization Cooperation Jackson is scrambling to aid evacuees.

“The worst effects of climate change are here now, and we have to build the systems and infrastructure to be able to deal with this,” says Akuno. But he admits that “Whatever we can amass is only going to scratch the surface of the overall need, and there has to be broader systemic change in order to deal with these crises in the future.”

Satellite images show the shocking extent of devastation in the Gulf Coast from Hurricane Ida. Whether or not President Joe Biden’s administration responds more efficiently to the needs of Ida’s survivors compared to Bush’s response during Katrina remains to be seen. But government responses to climate-related disasters, while necessary, are part of the “downstream” solutions that center on the symptoms of climate change.

The multiple “upstream” solutions to climate disasters include building resiliency before storms hit, and, most importantly, require swiftly mitigating the causes of climate change. Few political leaders since the 2005 Katrina disaster have been willing to take strong action on that critical front.

At the same time that residents of Louisiana, Mississippi, and New York are facing the horrors of damaged homes, flooded streets, and no power, Indigenous communities in the Midwest are fighting against a pipeline that will transport climate-change-causing fuels across their lands. The Enbridge Line 3 pipeline is being upgraded in order to transport tar sands—which are considered the “dirtiest fuel left on the planet”—across pristine lands where the Anishinaabe people grow wild rice.

The state of Minnesota’s estimate put the social and climate impacts of the completed project at $287 billion over 30 years. The last thing our rapidly changing climate needs is yet another oil pipeline, and yet few leaders appear willing to stand in the way of fossil fuel company profits.

“President Biden can suspend Line 3 right now,” says Tara Houska, founder of the Giniw Collective, in an interview. “All it would take is the stroke of a pen.” Houska has been part of a years-long resistance movement against the pipeline that has been calling on Democratic Party leaders like Biden and Minnesota Governor Tim Walz to stop the pipeline.

In spite of their stated acknowledgment of the dangers of climate change and the need to mitigate it, neither the federal nor state leader has taken action against Line 3. “They say they get it. It’s a lot of talk, and very little walk,” says Houska. “They’re still allowing the [fossil fuel] industry to continue to build and expand.”

Akuno worries that the Republican Party, which has an even worse record on climate change, will try to exploit Democrats’ failures in their bid to resume political control of Congress in 2022. “We’re already hearing signs in some of the local right-wing media trying to make this [Hurricane Ida] an ‘Afghanistan.’”

In just a few months, national leaders and civil society members will convene in Glasgow, Scotland, for the next United National Climate Change Conference known as COP 26. Akuno has been involved in social movement responses to the conference and says without hesitation that the Biden administration has simply not done enough as a global participant. “We’ve been deeply dissatisfied with the approach and orientation that they’re taking toward the mitigation aspects of climate change,” he says.

A press release for the latest Intergovernmental Panel on Climate Change (IPCC) report, which was released in early August, spells out deeply ominous warnings:

Hurricane Ida is clearly illustrating the climate devastation we face, and the Line 3 pipeline offers an equally clear opportunity to do something about it. Yet, a Democratic administration that has a stated commitment to “tackling climate change” and a Democratic governor who has made a similar pledge are both refusing to act.

Gov. Walz in defending his support of the Line 3 project said, “I’ve made the case and shown policies that we need to move away from fossil fuels but, in the meantime if we’re gonna transport oil, we need to do it as safely as we possibly can.” It is not clear why Walz feels such a strong obligation to ensure the transport of fossil fuels in the face of massive opposition and against his own stated desire to address the sources of climate change. “Do we really need to allow a fossil fuel company to do this?” asked Houska. “This oil is meant for foreign transport; it’s not meant for Minnesota’s energy security.”

She’s right. Neither Biden, nor Walz, and certainly not the people of Minnesota nor the United States as a whole, gains anything of value from the Line 3 project. Instead, at stake is—in the words of Enbridge CEO Al Monaco—“lots of free cash flow” to the company’s shareholders.

Even in the infrastructure bill that lawmakers are currently debating and that is a centerpiece of the Biden administration’s legislative agenda this year, few climate-mitigation aspects have survived the aggressive deal-making between the two major parties. In other words, as the nation is ravaged by floods, droughts, wildfires, and other real impacts of climate change, our political leaders have no plan to immediately do something about greenhouse gas emissions from fossil fuels.

As corporate profits continue to be valued more than our climate and our species, Houska urges us to have, “a radical shift in the way in which we view our place in the world.” Taking the long view—which our politicians appear unable or unwilling to take—she reminds us of what is far more important than corporate profits: “There has to be a recentering of nature in who we are as people and the centering of basic truths: that we cannot live without clean water, clean air, and clean soil.”