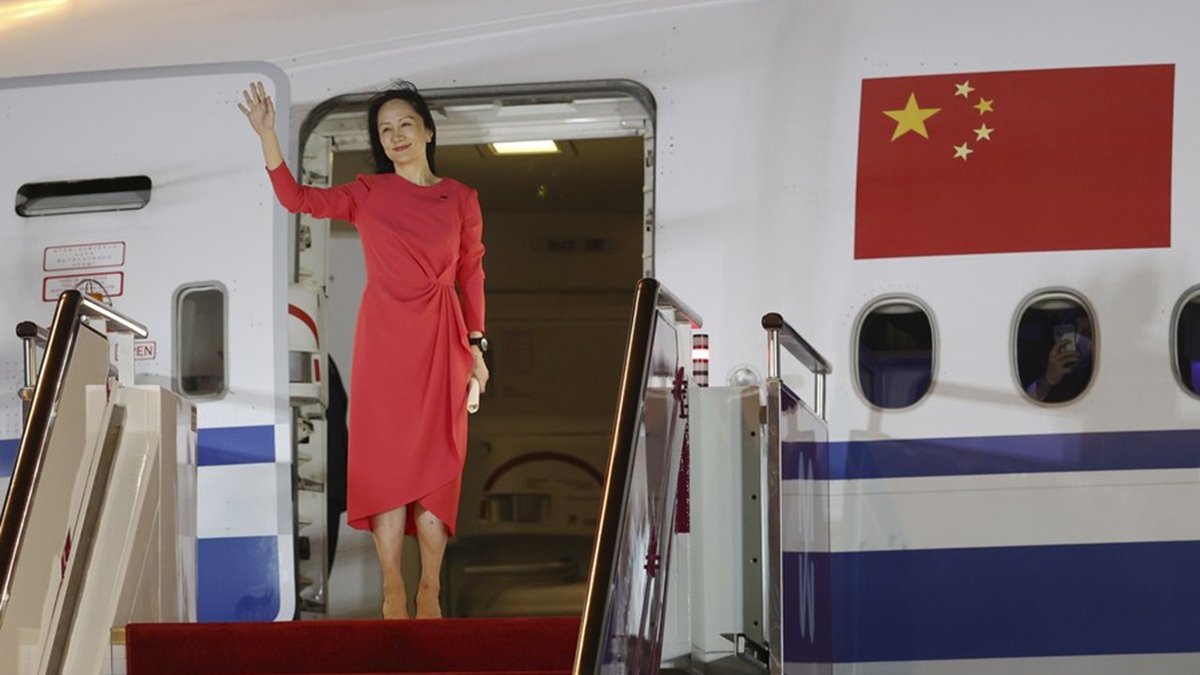 Huawei CFO Meng Wanzhou landed in Shenzhen, China, on September 25, 2021, nearly three years after her detention in Vancouver, Canada, over a US extradition attempt. Photo: Xinhua

After nearly three years under detention in Vancouver, Canada at the instigation of the United States, Meng Wanzhou, senior executive of tech giant Huawei, returned to China on Saturday, September 25. Meng’s release follows a deal struck between her and federal attorneys representing the US Department of Justice (DOJ) for a deferred prosecution on some of the charges. Following this, the US dropped the extradition efforts against her.

Meng, the chief financial officer of Huawei Technologies Co, was arrested on December 1, 2018, from the Vancouver International Airport, following an extradition appeal from the US. Meng was held under house arrest in Vancouver as the extradition case dragged on. Prosecutors representing the US informed the Canadian court of dropping the extradition attempts within hours of striking a deferred prosecution agreement with US prosecutors.

In the deal struck on Friday, September 24, Meng reportedly admitted to certain wrongdoings raised by the US while pleading not guilty on multiple serious charges of fraud at the US District Court for the Eastern District of New York in Brooklyn, where she appeared remotely.

According to TechCrunch, Meng admitted to “multiple material misrepresentations to a senior executive of a financial institution regarding Huawei’s business operations in Iran.” The DOJ, in return, deferred the prosecution against Meng until December 2022. According to reports, as per the deal, if she complies with the conditions set by the federal court in Brooklyn, the case would eventually be dropped.

At a time when relations between the US and China continue to be frosty, Meng’s release and the return has been received as a positive development in China. In a statement celebrating her release, Huawei said that the company “will continue to defend itself against the allegations in the US District Court for the Eastern District of New York.”

In response to reactions from US prosecutors of Meng’s admitting wrongdoings for her release, Meng’s attorney William Taylor stated that she “has not pleaded guilty and we fully expect the indictment will be dismissed with prejudice after fourteen months.”

In a statement to the media, China’s foreign ministry information department head, Hua Chunying, also insisted that the nature of the prosecution and the detention was political. “Facts have proven that it is a political persecution case targeting a Chinese national with the aim of suppressing Chinese high-tech companies,” Hua stated.

“The so-called fraud charges against Meng are nothing but pure fabrication. Even the HSBC — the ‘victim’ named by the US side — has released files proving Meng’s innocence,” she added.

US prosecutors accused Meng of of providing misleading information on the nature of Huawei’s relationship with Skycom to HSBC between 2009 and 2014 to supposedly bypass the US-imposed unilateral sanctions against Iran. The US Justice Department, then under the Trump administration, filed charges of defrauding a bank against her at federal court in Brooklyn, based on this.

Also Read | Who benefits from the US escalation against Huawei?

The case came at a time when the Trump administration had escalated a series of trade disputes and imposed exorbitant tariffs against various Chinese goods and services, which came to be known as the “trade war.”

Huawei was at the center of this international trade dispute between the two economic powerhouses. Since the charges of bypassing sanctions against Iran were raised by the US, the company, along with others, has been the target of US blacklisting and other punitive measures under the Trump administration.