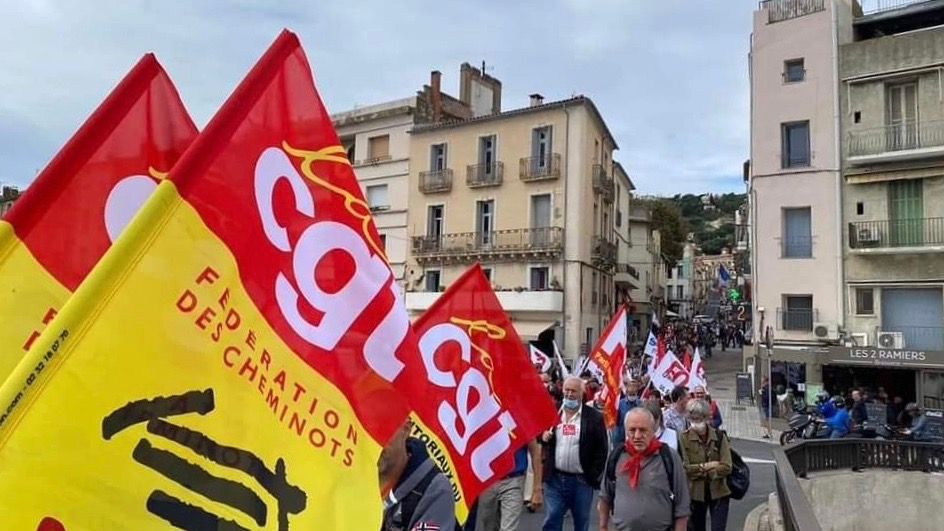 Workers across France participated in a national strike on Tuesday, October 5, under the call of major trade unions, including the General Confederation of Labor (CGT), Workers Force (LO), Unitary Trade Union Federation (FSU), Solidaires, UNEF and UNL, among others. Mobilizations were organized at over 200 locations across the country. The unions gave the call for the general strike and protest mobilizations demanding higher wages, unemployment insurance, and pensions. Activists from various political groups, including the French Communist Party (PCF), Young Communist Movement of France (MJCF) and the Union of Communist Students (UEC), also joined the mobilizations in various parts of the country.

According to reports, thousands of people joined the march in Paris, which started from the Place de la République. The protesters also denounced the latest hike in energy prices and  demanded scrapping of reforms in unemployment benefits.

Due to the reforms in unemployment benefits, which became effective from October 1, around 1.5 million beneficiaries will see their benefits reduced by 17% on average, as per reports. This has triggered widespread protests by unions and youth across France.

Earlier, in their joint statement, the unions had demanded increased salaries, scrapping of pension reforms, ensuring professional equality between men and women, a halt on redundancies, tighter enforcement of labor laws, and stopping privatization and the closure of public services.

Prior to the mobilization on Tuesday, CGT head Philippe Martinez told the media that “as the presidential elections are approaching, the unions wanted social questions to be at the heart of the election campaign. On October 5th, it is in our interest to send a strong signal. We need workers to mobilize at the moment. We need to have everyone show that we do not intend to let things slide.”

“Strike action is certainly one way to shape the agenda and could have an influence on manifesto pledges in the build up to the upcoming presidential election,” he added.

The 2022 French presidential election is scheduled for April 10. The tenure of current French president Emmanuel Macron was marked by neo-liberal policies and anti-people austerity measures. These have been met with massive working class protest mobilizations, including the Yellow Vest protests, protests against pension reforms, doctors’ protests, students’ protests against education reforms, and mobilizations against the global security bill. Macron was forced to withdraw or dilute many unpopular policies like the ‘Fuel Tax’ after succumbing to protests by working class sections.