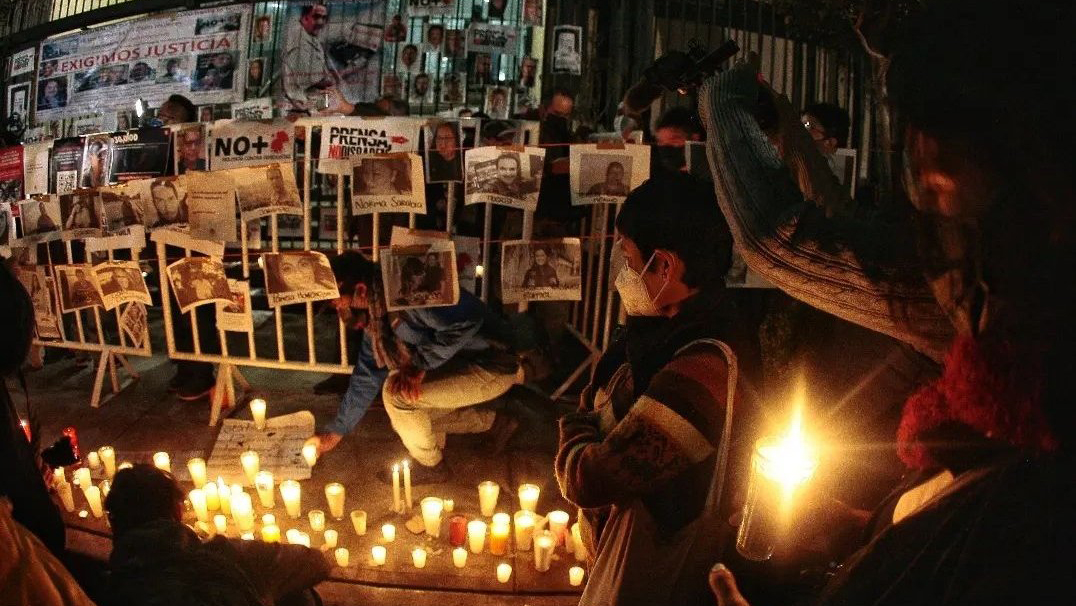 On January 25, hundreds of journalists held vigils across Mexico demanding an end to violence against journalists in the country. Photo: Luis Enrique Olivares / Foto Reporteros Mexico

On January 25, hundreds of journalists took to the streets across Mexico to protest against the assassinations of three fellow professionals this month. Journalists, joined in solidarity by members of human rights and social organizations, held vigils and demonstrated in 65 cities across the country to demand justice for their colleagues, and an end to violence and impunity for crimes against journalists. The nationwide protests were among the largest recent protests against the murders of media workers in Mexico.

The protesters convened in public squares, parks and government offices, mostly dressed in black and carrying candles and photographs of dozens of journalists murdered in recent years, urging the government and police to strengthen protection for threatened journalists and expedite investigations into their assassinations. In the capital Mexico City, the protesters gathered outside the interior ministry. They covered the front gate of the ministry’s headquarters with photos of murdered journalists.

Earlier, on January 24 as well, dozens of media workers protested in Tijuana and Mexicali cities, in the Baja California state, in rejection of the murders. They demanded that the State Attorney General’s Office investigate the killings in the light of crimes against journalists and journalistic practices.

A spree of assassinations

The protests were triggered by the assassination of three journalists in less than fifteen days: Lourdes Maldonado on January 23 in Tijuana, Margarito Martínez on January 17 also in Tijuana, and José Gamboa on January 10 in Veracruz. At 7:00 pm on a Sunday, Reporter Lourdes Maldonado was shot dead inside her car, outside her home in the Santa Fe neighborhood. Photojournalist Margarito Martínez was also gunned down in broad daylight, as he was getting into his car outside his home in the Camino Verde neighborhood. Meanwhile, José Gamboa, director of the Inforegio news website, was stabbed to death in the Floresta neighborhood two weeks ago.

Maldonado covered corruption and politics. She had filed a lawsuit against former governor and senator Jaime Bonilla’s media company, Primer Sistema de Noticias (PSN), for unjustified dismissal. In March 2019, she announced that her life was in danger due to the lawsuit, and requested government protection. She was then registered in the Baja California Protection Program for Journalists and Human Rights Defenders, but the protection was not permanent. Just days before she was killed, she won the lawsuit and forced the PSN to pay her USD 24,250 in compensation. Bonilla is a member of the ruling Morena party. On January 25, President Andrés Manuel López Obrador (AMLO) ordered a thorough investigation into Maldonado’s murder.

Martínez reported on crime and violence. He worked with several national and international media outlets. He had recently received several death threats, and had also decided to enter in the protection program.

Gamboa frequently reported on security issues in the Veracruz state. He was critical of the government’s failure to respond to organized crime and murders in the state.

Various media unions and human rights organizations, such as Periodistas Unidos, the Assembly of Journalist Workers “Tenemos que hablar”, Mexico City’s Human Rights Commission, and Baja California’s Human Rights Commission, among others, condemned the assassinations, arguing that journalists were killed for their work and called on authorities to investigate the murders and prosecute the perpetrators. Many condemned the murders as attacks on the right to freedom of expression and access to information.

Alejandro Melendez, member of the Periodistas Unidos organization, in conversation with El País, said that “journalists who end up murdered often fight against corrupt politicians who are linked to criminals.” He stressed that “criminal structures will not disappear as long as the State does not support crime reporters.”

Mexico is considered one of the most dangerous countries to practice journalism. Reporters Without Borders (RWF) has placed Mexico at 143rd rank (among 180 nations) in press freedom. According to Article 19, an international organization defending freedom of expression, three journalists have been killed so far this year, seven in 2021, 28 under the current president and 148 from 2000 to date (136 men and 12 women).

A recent report from Mexico’s interior ministry stated that at least 495 journalists are currently protected by the federal government’s Protection Mechanism for Human Rights Defenders and Journalists. The head of the Human Rights Unit and the Mechanism, Enrique Irazoque, on January 26, reported that at the beginning of AMLO’s administration, which began in 2018, the Mechanism had 758 people. To date, there are 1,508 people under such protection, including 495 journalists and 1,013 human rights defenders. Most of the beneficiary journalists are from Mexico City, Guerrero, Puebla, Sonora, Tamaulipas, Quintana Roo and Veracruz.