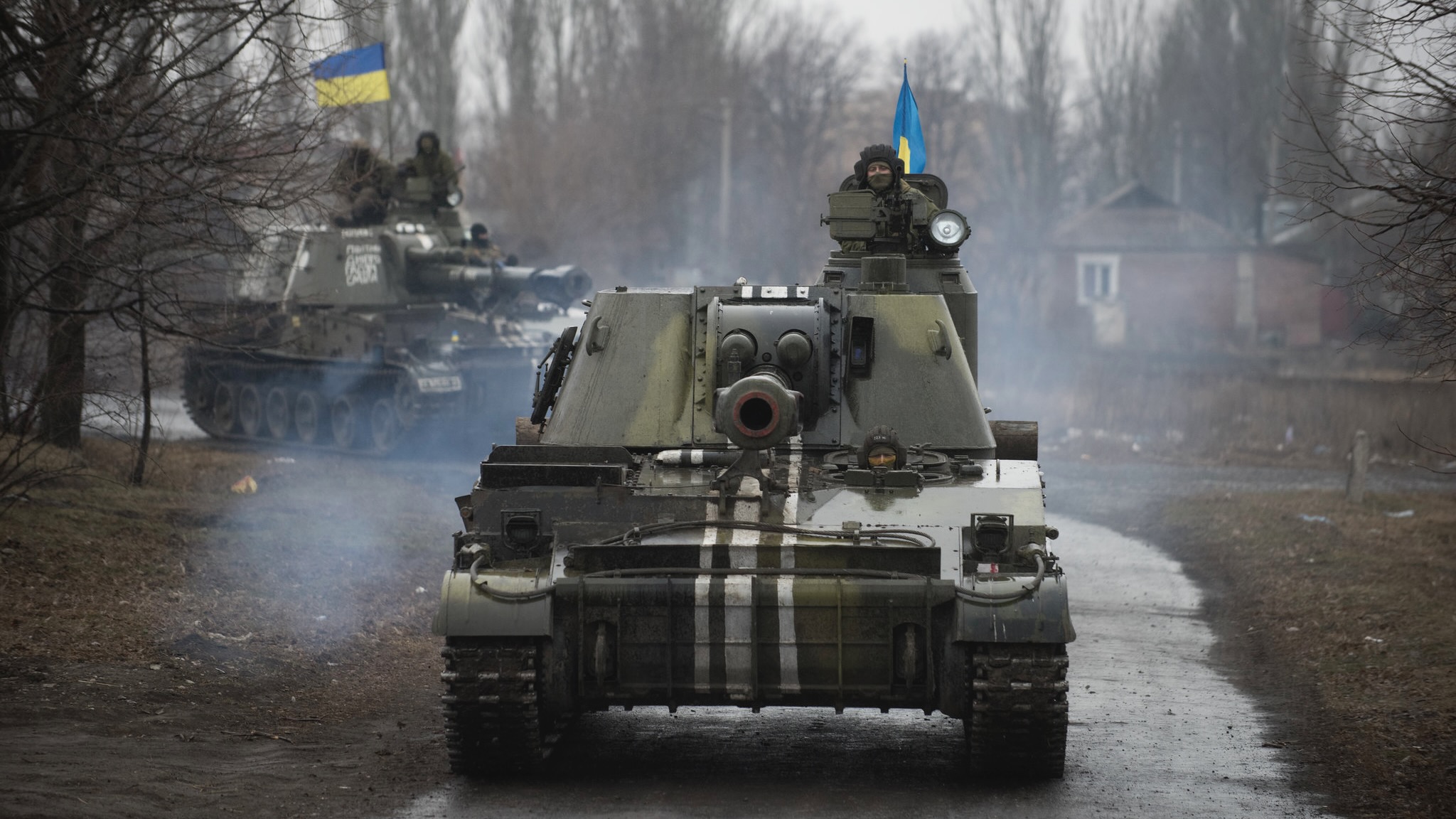 The Organization for Security and Co-operation in Europe observing movement of heavy weaponry in Eastern Ukraine in 2015. Photo: OSCE

There’s an increasingly surreal air to the war scare over Ukraine.

The original roles in the drama seem to be reversed. Back in December Ukrainian Foreign Minister Oleksii Reznikov was warning that “not provoking Russia — that strategy does not and will not work,” claiming that Russia invaded Georgia in 2008 because NATO hadn’t let it join (in fact Georgia began that war by attacking South Ossetia, but these details rarely trouble politicians or journalists).

In December, the US seemed much more reluctant to escalate matters. President Joe Biden said it would not deploy troops to Ukraine, and ruled out a military response to any Russian incursion.

The same mood music emanated from Westminster where Defense Secretary Ben Wallace said that British troops would not fight Russia over Ukraine, as the latter was not a NATO member.

If Russia did act against Ukraine (and we should remember that it has not at any point threatened to) the US and EU response would be sanctions.

This weekend just gone Reznikov was assuring Ukrainian MPs that actually no Russian military maneuvers had been observed that were any more threatening than those of a year ago, and there was no reason to fear an imminent attack.

Ukrainian President Volodymyr Zelensky gave an even blunter press conference following a phone call with Biden, calling on the US and Britain to tone down their rhetoric about an invasion, since it could create panic and was bad for business.

Asked about the US’s claim that Russia might invade next month, he snapped that, as Ukraine’s head of government, he knew the situation better than Biden.

He even cast doubt on the idea that Russia’s military build-up was necessarily anything to do with Ukraine, saying we had no way of knowing it wasn’t a routine troop rotation.

Did London and Washington heed his pleas? They didn’t even acknowledge them.

By Sunday morning Boris Johnson was pledging “land, sea and air” forces would be sent to eastern Europe to see off the Russian menace.

Biden has put thousands of extra troops on standby for deployment to Europe (where the US already has tens of thousands of troops, and NATO has forward bases in Poland and all three of the Baltic states).

The more Ukraine insists that it is not afraid a war is coming, the louder the US and Britain declare their readiness to fight one.

Does this mean all we’re dealing with is a shadow-boxing match? Russia deploys troops near its western border and conducts exercises with Belarus to lend weight to security demands it put to the US last month (some of which, such as a mutual commitment not to station nuclear warheads outside their own territory, the whole left ought to have no trouble endorsing).

The US, meanwhile, ramps up the fear of Russia in order to press longstanding aims such as scuppering the Nord Stream 2 pipeline, which it says would pose a security risk by increasing European dependence on Russian gas (and the cancellation of which would, conveniently, force Europe to purchase gas elsewhere — when the US is trying to increase shale gas exports).

Ukraine is also keen to stop Nord Stream 2, since it would lose transit fees for Russian gas currently piped through its territory (Ukrainian state energy firm Naftogaz estimates losses at $3 billion a year if the new pipeline becomes operational).

This could explain why Zelensky, while downplaying the threat of war on Saturday, did call for sanctions on Nord Stream 2 regardless of whether Russia attacks or not.

If this is true, Ukraine’s about-turn reflects its fear that the situation is getting out of hand: an initial policy of talking up the threat to derail the pipeline and get access to advanced weaponry has snowballed to the extent that it might actually start a war, which would clearly be catastrophic for the whole of Europe but most of all for Ukraine. But if neither side actually wants war, what is there to be afraid of?

Sadly this military posturing is extremely risky, and does significantly increase the chance of a conflict breaking out.

This is true for all the traditional reasons — moves pitched as deterrence by one side can be interpreted as belligerence by the other, and Britain in particular has a recent track record of “goading” Russia with air and sea deployments along its borders.

As Guardian columnist Simon Jenkins observed a few weeks ago, “the invitation to Moscow to call Britain’s bluff is glaring.”

More than once in the original cold war, misunderstandings came close to sparking nuclear conflict, which was averted by the courage and calm of individuals on the front line.

Hardly anyone in the British warmongering Parliament seems to grasp this risk.

But with Ukraine, the risks are enormously multiplied. This is because the war in the Donbass means that fighting does not even have to “break out” in the ordinary way: it could be said to be happening already.

And the nature of that war means a new outbreak might not even be under control from Moscow or Kiev or Washington.

The self-governing separatist people’s republics of Donetsk and Lugansk are backed by Russia, but their forces are not part of the Russian army.

On the other side of the trenches the situation is even more complex. British media — particularly the Daily Mail — has gushed over the heroic “volunteers” manning the battle lines for Ukraine in the Donbass, even running interviews with British ex-soldiers “contracted” to fight for Ukraine (that is, mercenaries).

Kiev’s forces in the Donbass war are by no means all regular soldiers. Far-right forces were the footsoldiers of the 2014 Maidan coup that provoked the conflict, and have been on the front lines ever since.

Most notorious is the Azov Battalion, a neonazi unit formed from ultras from the Metalist Kharkiv football club in 2014.

Its founder Andriy Biletsky is an unsubtle fascist, having called on Ukraine to lead a crusade of the “white races” against the “semite-led untermenschen.”

Ukraine’s Interior Ministry authorized the formation of paramilitary battalions that year, and Azov was one. Another, the Aidar Battalion, formed the same year, also has far-right ideological associations.

These fascist units are allowed a cloak of respectability by Ukraine’s rehabilitation of Nazi collaborator Stepan Bandera and rewriting of history to portray genocidal organizations like his Ukrainian Insurgent Army, which played a major role in the Holocaust, as anti-Soviet patriots.

The Morning Star is sometimes accused of exaggerating the fascist character of the 2014 coup and its aftermath, since the Kiev government is not fascist.

But its glorification of actual fascists like Bandera has consequences beyond the bad taste of marches through the capital commemorating regiments of the Waffen SS.

By autumn 2014, Amnesty International was warning the Ukrainian government that it had documented war crimes “including abductions, unlawful detention, ill-treatment, robbery, extortion, and possible executions committed by the Aidar Battalion” in the Donbass.

The mother of one separatist fighter reported being posted the head of her son in a box following his capture by “white nationalist paramilitaries.”

Yet that September the Azov Battalion was formally enrolled in the National Guard of Ukraine.

Are these the forces British volunteers or mercenaries are signing up with? Certainly they have tried to recruit foreigners in the past.

Hope Not Hate warned in 2018 that the Azov Battalion was working with a British group called the Misanthropic Division to recruit far-right British activists to travel to Ukraine to fight.

There is no evidence that the individuals interviewed in the Mail have joined the Azov Battalion or are aligned with the far right.

They are described as based around Mariupol, which is Azov’s HQ, but the Mail did not respond to a request for information on which unit they were fighting with.

Ukrainian Communist Party leader Petro Symonenko says foreign mercenaries are allowed to sign up with the Ukrainian military as a matter of course, and it is not just units like Azov which recruit them.

“After the 2014 coup, Ukraine has turned into a sump of neonazis from around the world. In the Donbass there are mercenaries from many countries as part of the volunteer battalions,” he tells me, “including the UK.

“In addition to the ideological Nazis you have the ‘human safari’ scum, who see the war in the Donbass as a kind of extreme entertainment.”

“Then you have the private military companies — fighters and instructors from Letera-43 from Italy, Halo Trust, Greystone, ‘Academi’ (known as Blackwater before 2009) from the US and others. And there are a lot of official instructors from NATO countries — Britain, the US, Canada and so on.”

Leaving aside the risks to those living in Britain of allowing people to travel to warzones to fight alongside known extremists — we saw the potential consequences when a fighter, returned from the NATO-backed war to overthrow Colonel Gadaffi in Libya, killed 22 people in the Manchester Arena terror attack in 2017 — the picture is explosive.

It would not take much to light this tinderbox and quite a few of the unsavory characters in that mix would not be averse to doing so.

That is why the only sane approach to this crisis is de-escalation. The government must be pressed to withdraw troops from Ukraine, and stop loading up an army bristling with “volunteers” with heavy weaponry.

Talks with Russia and Ukraine on reviving the Minsk peace process are fortunately under way, and Kiev too clearly now backs reducing tensions. Time for London and Washington to pull back from the brink.

This article by Ben Chacko was first published in Morning Star.