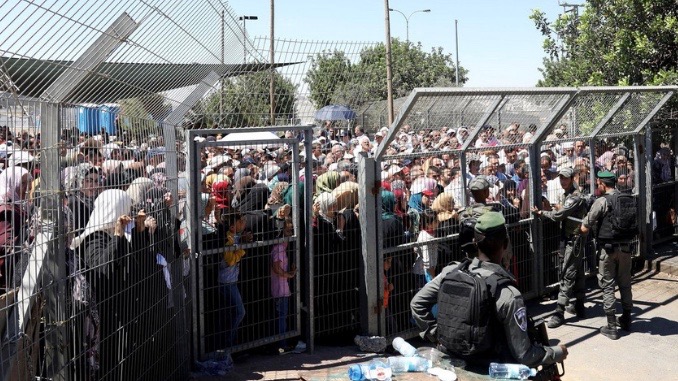 Palestinians at an Israeli military checkpoint. (Photo: via ActiveStills.org)

Amnesty International published a report on Tuesday, February 1, calling out Israel’s systematic oppression of Palestinians as ‘apartheid’. The 280-page report titled ‘Israel’s Apartheid Against Palestinians’ concludes that Israeli laws and policies of segregation, exclusion, and dispossession constitute “the crime against humanity of apartheid” as defined in the Rome Statute and the Apartheid convention.

Amnesty asked the international community to hold Israel accountable for its war crimes and human rights violations against Palestinians through economic, diplomatic, and legal means, including arms embargo, sanctions and prosecution of Israeli civilian and military leaders.

Palestinian activist-lawyer and former PLO legal advisor Diana Buttu in her first reactions to the report told Peoples Dispatch, “of course Amnesty International calls it apartheid – because it is. For more than two decades Palestinians have been saying the same and our words have been supported by anti-apartheid activists such as the late Archbishop Desmond Tutu. It’s about time. The real question now is whether the world will apply economic sanctions to Israel just as it did to end apartheid in South Africa.”

Speaking about the report at a press conference in occupied East Jerusalem on Tuesday, Amnesty secretary general Agnes Callamard said that the international community must take “resolute action against the crime against humanity being perpetrated in order to maintain the system of apartheid.”

Commenting on the report’s findings, she said, “our report reveals the true extent of Israel’s apartheid regime. Whether they live in Gaza, East Jerusalem and the rest of the West Bank, or Israel itself, Palestinians are treated as an inferior racial group and systematically deprived of their rights. We found that Israel’s cruel policies of segregation, dispossession, and exclusion across all territories under its control clearly amount to apartheid. The international community has an obligation to act. There is no possible justification for a system built around the institutionalized and prolonged racist oppression of millions of people. Apartheid has no place in our world, and states which choose to make allowances for Israel will find themselves on the wrong side of history.”

She also specifically mentioned countries that either supply Israel with deadly, sophisticated weapons, or provide it diplomatic cover in international organizations like the United Nations Security Council and the International Criminal Court. She accused such states of “supporting a system of apartheid, undermining the international legal order, and exacerbating the suffering of the Palestinian people.”

The report goes into great detail about the wide range of repressive laws, restrictions and policies that Israel has used against Palestinians not only in the occupied territories of West Bank and Gaza, but also affecting the Palestinian citizens of Israel. It also lists a number of recent cases of Israeli oppression and attacks against Palestinians to demonstrate the different ways in which Israel continues its attempts at ethnic cleansing in order to annex more Palestinian land.

Some examples include the Israeli confiscation and demolition of property in Palestinian neighborhoods of East Jerusalem like Sheikh Jarrah and attempts to uproot Palestinian Bedouins from their villages in the Negev desert inside present-day Israel. The heavy handed military response by the Israeli military to the 2018-19 weekly Great March of Return protests by Palestinians on the Israeli-Gaza border resulted in the killings of scores of Palestinians. The ever-expanding illegal Israeli settlements on stolen Palestinian land and the devastating 14-year-long Israeli blockade on Gaza are among the many violations and crimes that Palestinians continue to endure to this day.

Callamard went on to say, “our report reveals the true extent of Israel’s apartheid regime. Whether they live in Gaza, East Jerusalem and the rest of the West Bank, or Israel itself, Palestinians are treated as an inferior racial group and systematically deprived of their rights.”

The report gives examples of racially motivated and discriminatory laws that Israel has enacted against Palestinian citizens of Israel, such as the citizenship law, the law regarding Jewish-Palestinian intermarriage, and similar laws governing other aspects of life affecting housing, water supply, electricity connections, etc. Severe restrictions and curbs on Palestinians under occupation have been used to maintain the structures of separation and domination, many of them reminiscent of apartheid-era South Africa. These include separate roads and highways, separation walls and other similar structures – most prominently the 700 km-long apartheid wall stretching across the occupied West Bank. In addition, travel passes are required to move between the occupied territories and Israel and hundreds of military checkpoints exist across Palestinian territories where Palestinians are held up for hours and treated in a degrading and humiliating manner.

Notably, compared to other reports in the past by groups like Human Rights Watch and Israeli groups like B’Tselem and Yesh Din which called out Israeli apartheid in the occupied territories, the Amnesty report goes much beyond to say that all Israeli laws, actions and policies, whether civilian or military, are designed to facilitate “the enforcement of the system of apartheid against Palestinians across Israel” in the West Bank and Gaza, as well as “against Palestinian refugees and their descendants outside the territory.”

The report adds that Israel has repeatedly prevented Palestinian refugees from returning to their native land, in contravention of international law and UN resolutions regarding the rights of refugees. At the same time, it is keeping millions of Palestinians in the occupied territories stateless. Amnesty concludes that “since its establishment in 1948, Israel has pursued an explicit policy of establishing and maintaining a Jewish demographic hegemony” for “maximizing its control over land to benefit Jewish Israelis while minimizing the number of Palestinians and restricting their rights and obstructing their ability to challenge this dispossession.”

Finally, the report warns that the international community’s response “to apartheid must no longer be limited to bland condemnations and equivocating. Unless we tackle the root causes, Palestinians and Israelis will remain locked in the cycle of violence which has destroyed so many lives. Israel must dismantle the apartheid system and start treating Palestinians as human beings with equal rights and dignity. Until it does, peace and security will remain a distant prospect for Israelis and Palestinians alike.” It directly calls out the repeated Israeli excuse of security to justify its oppression and subjugation of Palestinians.

The report suggests some of the actions that international organizations can take to hold Israel accountable. It asks the International Criminal Court to consider the “crime of apartheid in its current investigation in the OPT” and calls on all states to “exercise universal jurisdiction to bring perpetrators of apartheid crimes to justice.” It also urges the United Nations Security Council to impose a “comprehensive arms embargo on Israel to cover all weapons and munitions as well as law enforcement equipment, given the thousands of Palestinian civilians who have been unlawfully killed by Israeli forces, besides also imposing targeted sanctions, such as asset freezes, against Israeli officials most implicated in the crime of apartheid.”