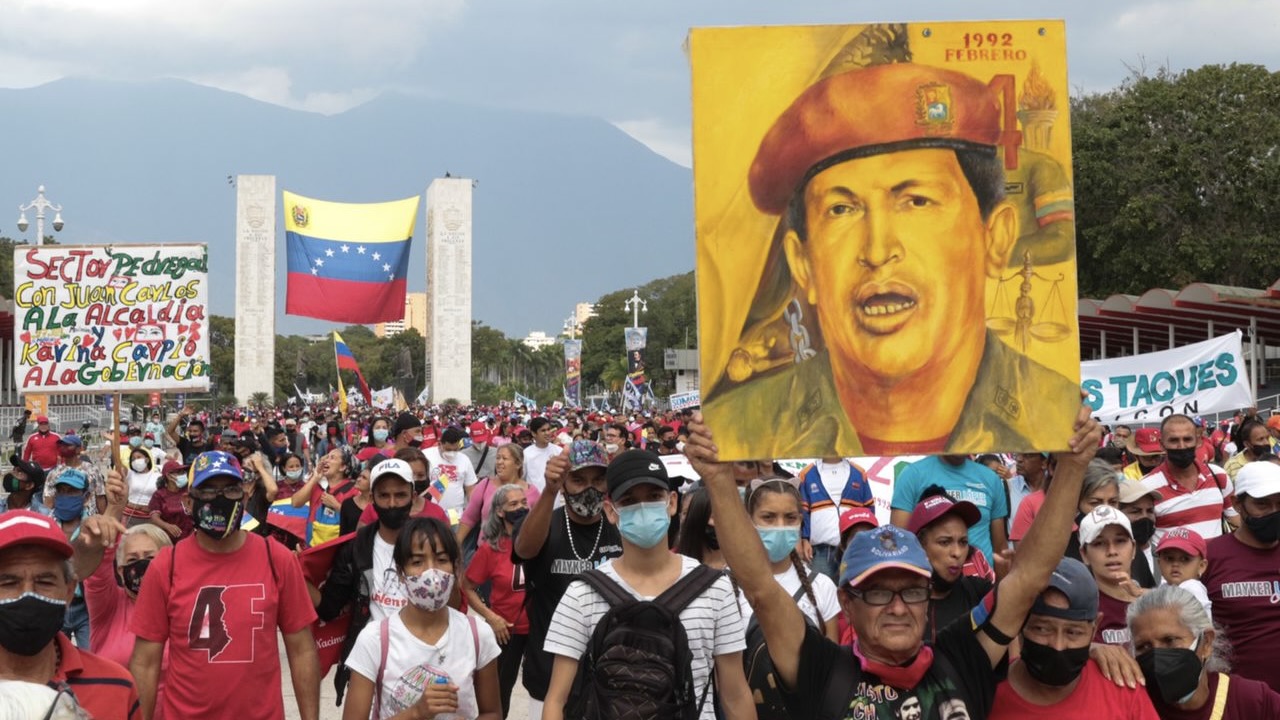 Tens of thousands of Venezuelans took to the streets of the capital Caracas to commemorate the 30th anniversary of the 1992 revolt on February 4. Photo: Nicolás Maduro/Twitter

February 4 marked 30 years since the civic-military rebellion led by Commander Hugo Chávez against the neoliberal government of president Carlos Andrés Pérez in Venezuela. The rebellion, despite its failure, marked the end of neoliberalism and the beginning of a new era of profound socio-political changes in the Latin American country.

This past Friday, tens of thousands of Venezuelans took to the streets of the capital Caracas to commemorate the 30th anniversary of the 1992 revolt. At the Cuartel de la Montaña military museum, where the mortal remains of Commander Chávez rest, a parade was organized to pay tribute to the revolutionary leader, who transformed the social reality of the country. Meanwhile, two massive marches were organized in honor of Chávez, reiterating their commitment to defend his legacy. One of the marches started from Plaza Venezuela and the other from the National Institute for Socialist Training and Education (INCES), which later united at Paseo De Los Próceres monument, culminating at the Indigenous monument.

President Nicolás Maduro, who attended the massive crowd at the rally in Caracas, highlighted that the anti-oligarchic, anti-imperialist and popular character of the uprising served as a basis to the process that led to the Bolivarian Revolution. “February 4 was a revolutionary, Bolivarian and humanist rebellion against the corrupt oligarchy and against the imperialism of the International Monetary Fund,” said Maduro.

Pointing to the revolutionary spirit of Venezuelans in the face of adversities due to the US sanctions, the head of state proudly stressed that after three decades of tough and complex battles, Venezuelans continue to be victorious in permanent revolution and rebellion. “30 years have passed since the day of the awakening of consciousness, 30 years of a difficult history, 30 years of a historical deed of great battles. But I can say that 30 years later, in the spirit of Commander Hugo Chávez, Commander, here are the people of Venezuela in permanent revolution, in rebellion!” he said.

The president emphasized that the strength of the civic-military union and popular consciousness are vital to face the constant threats and attacks against the nation by the United States government. In this regard, he called on the people to consolidate the struggle in defense of democracy, independence, peace, social justice and sovereignty in the face of coercive measures.

Likewise, Chávez’s successor, Maduro ratified the commitment of his government to advance in the economic recovery and in the strengthening of social protection programs to support and improve the living conditions of citizens, which deteriorated as a consequence of the commercial, economic, and financial blockade.

In the 1980s, Venezuela was experiencing a serious economic crisis. Pérez, in a bid to “save” the national economy, signed a deal with the International Monetary Fund (IMF) in 1989 and subsequently, implemented a series of neoliberal reforms. The abrupt increase in the price of basic food products, fuel, public transportation, and other public services, sparked outrage in the country. On February 27, 1989, hundreds of thousands of poor Venezuelans took to the streets of Caracas against neoliberalism and decades of social injustice in the country, a protest action known as “Caracazo.”

In the face of insurrection, Pérez decreed a state of emergency and suspended all constitutional guarantees to citizens. The government deployed the military and permitted soldiers to use firearms against protesters, unleashing a brutal repression that resulted in the deaths of over three thousand people.

The “Caracazo” bloodbath pushed the Revolutionary Bolivarian Movement-200 (MBR-200), a political movement founded by Chávez in the country’s military barracks in 1982, into action.

In the early hours of February 4, 1992, in an attempt to overthrow the anti-people and corrupt government of Pérez and restore dignity to the nation, five army units led by young Lieutenant Colonel Chávez moved into Caracas to seize key military bases and communications installations throughout the city, including the president’s residence, the government headquarters, the defense ministry, the La Carlota military airport, and the military museum.

Supported by the civilian population, the rebel forces made swift advances and took control of large cities such as Valencia, Maracaibo, and Maracay. However, betrayals and other unforeseen circumstances left Chávez with a small group of rebels cut off in the Military Museum. Since he did not have any means of conveying orders to his collaborators, Chávez soon gave himself up to the government to avoid unnecessary deaths. After doing so, he was allowed to speak on national television, through which he addressed the fellow rebels and assured them that they had only failed “for now,” subtly indicating towards the social revolution to come. The rebellion did not succeed, however, it kindled hope for change in Venezuelans and gave them a leader who could lead them in the process.

After spending two years in prison, Chávez was released by former president Rafael Caldera. In 1997, he refounded the MBR as the Movement for the Fifth Republic (MVR), a party with which he won the 1998 presidential elections against Caldera with 56.54% of the votes, the highest percentage of the vote in four decades.

Hugo Chávez speaking to the media on February 4, 1992 pic.twitter.com/lapR2duR3Q

On February 2, 1999, Chávez was first sworn in as the President of Venezuela and vowed to democratically reform the 1961 Constitution and lay the foundations for a new inclusive and social constitution.

The same day, he began the revolutionary process and called for a referendum for the creation of a National Constituent Assembly to write a new Constitution, based on the principles of the Liberator Simón Bolívar: socialism, nationalization and state-led economy. The plebiscite for the drafting of a new Constitution was approved by 87% of the vote. On December 15, 1999, the constitutional draft that established a new social and people-centric model of the state was approved with 71% of the votes. It also renamed the country as the Bolivarian Republic of Venezuela.

Chávez’s rule, from 1999 until his death in 2013, marked the end of the Fourth Republic, a time marked by social inequality, neoliberal economic policies and abuse of power, and the beginning of the Bolivarian Revolution, a process of political, economic, social and cultural transformation of Venezuela.

On the eve of the 30th anniversary of the revolt, President Maduro inaugurated the Anti-Imperialist Rebellion Square in Caracas to remember the heroic deeds of the former president. In the square, a silhouette of Commander Chávez, with a tree of three roots that signifies the Bolivarian Revolution, was also installed.