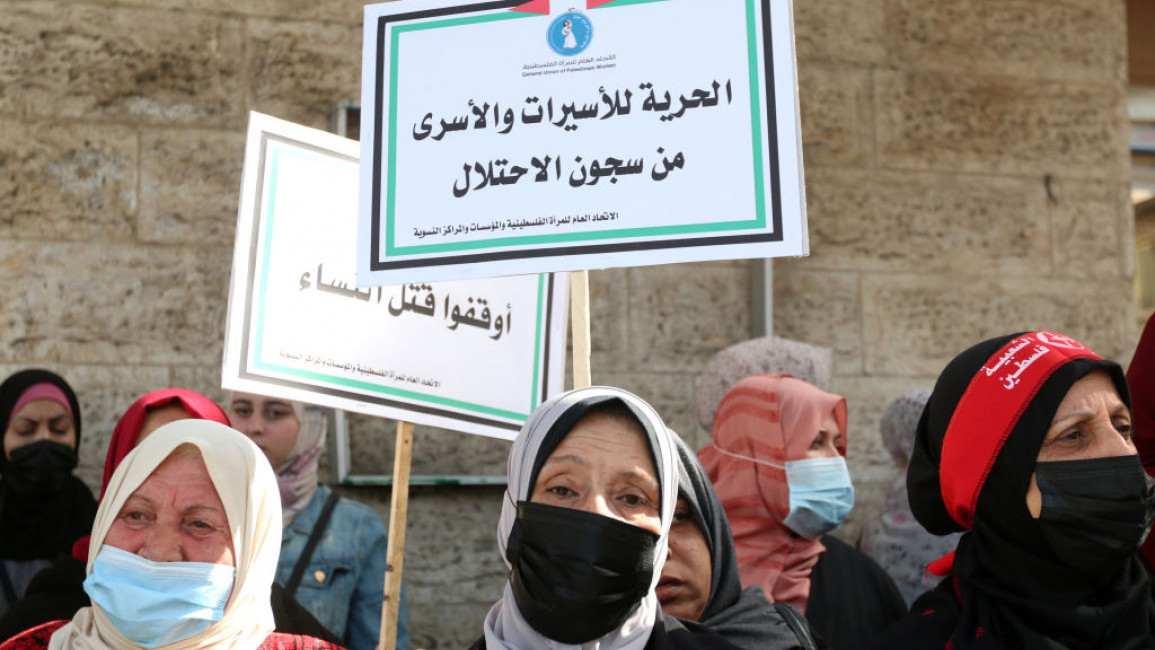 Activists from the group ‘Action for Female Palestinian Prisoners’ staged a demonstration in front of the Damon prison in solidarity with the 32 women Palestinian prisoners currently being detained by Israel in the jail, according to a report by the Wafa news agency. The demonstrators called for the immediate release of the prisoners, including one administrative detainee and one minor girl under the age of 18. The demonstrations come just over a week after the prisoners wrote a letter to Israeli prison authorities calling upon them to uphold their rights and put an end to the mistreatment and abuse they are facing.

The report stated that the protesters organized a vigil, raising banners and posters calling for the prisoners’ release. The protesters also highlighted the plight of prisoners who have not been able to meet their families regularly or maintain contact with them due to the severe and blatantly illegal restrictions imposed by prison authorities. As many as 10 of the women prisoners have children. Last week’s letter by women prisoners also called on authorities to install a phone in the prison which the prisoners can use to make regular calls to their families. They also demanded the removal of physical barriers between the prisoners and their family members during prison visits.

The protesters further urged the authorities to end the illegal and inhumane practice of administrative detention against the women as well as other prisoners, under which they can be kept in prison without charge or trial for extended periods of time. These orders are renewable every 4 to 6 months, effectively keeping them in prison indefinitely.

The Israeli human rights group, B’Tselem, in a statement, denounced the policy, saying that it allows Israel to “hold thousands of Palestinians for lengthy periods of time […]. This leaves the detainees helpless – facing unknown allegations with no way to disprove them, not knowing when they will be released, and without being charged, tried or convicted.”

Out of the total approximately 4,500 Palestinians currently being held in Israeli prisons, close to 500 are administrative detainees. One of them, 40-year old Khalil Awawdeh, was reported to be on the 27th day of a hunger strike to protest his illegal detention. He launched his hunger strike on March 3, a little over three months following his detention on December 27 last year. The Palestinian Commission of Detainees’ and ex-Detainees’ Affairs has revealed that his health has drastically deteriorated and he has lost almost 10 kg of weight.