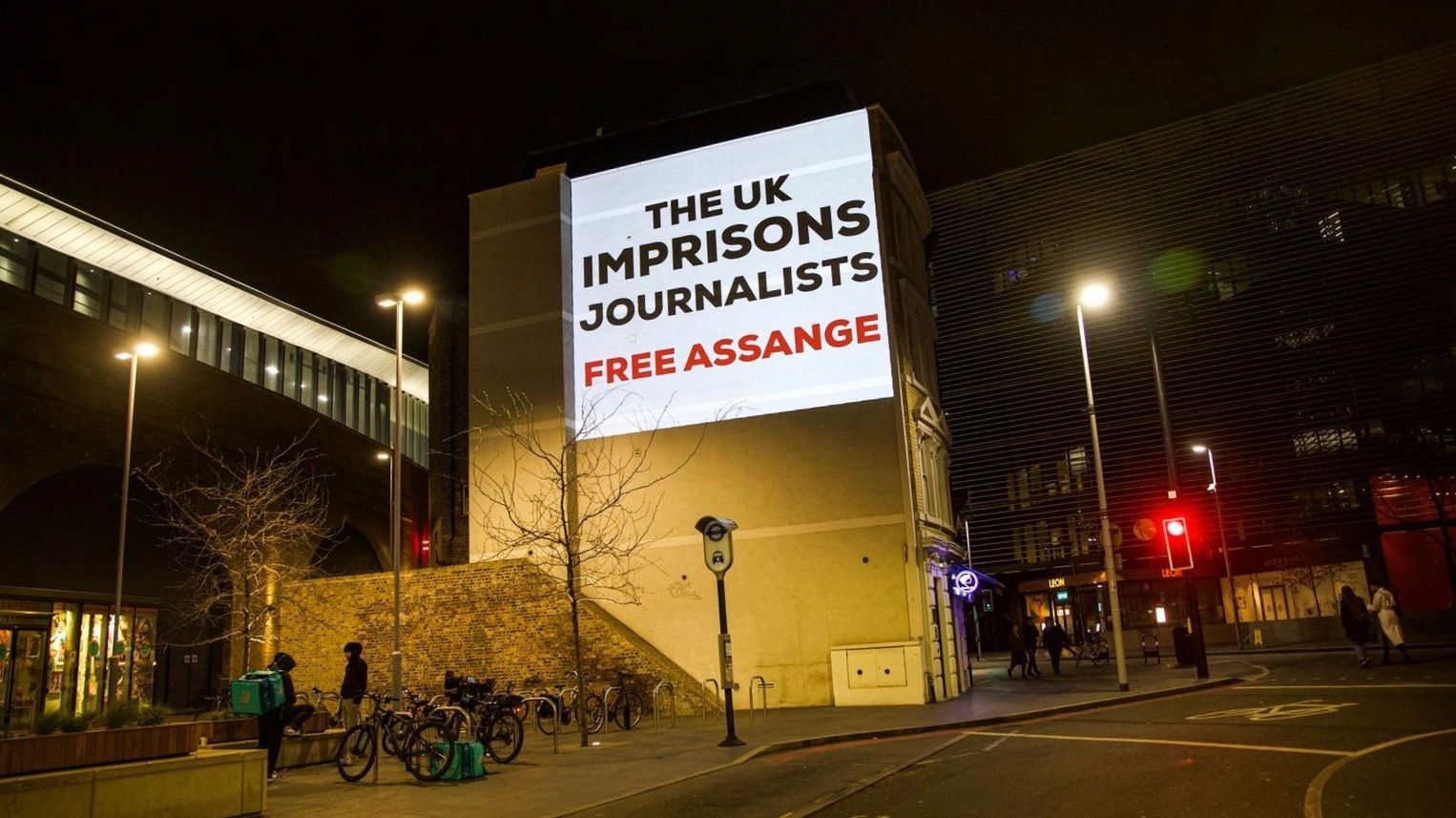 Projections were put up on buildings across London on the third anniversary of Julian Assange’s arrest on April 11, 2022. (Photo: Wikileaks/Twitter)

As his extradition to the United States looms large, Julian Assange completed three years of imprisonment in the United Kingdom on Monday, April 11. Held in a high security prison complex in Belmarsh in the outskirts of London, the Wikileaks founder has been in prison since 2019 when he was dragged out of the Ecuadorian embassy in London by the police.

Marking the anniversary, Assange’s supporters held vigils in London and around the world. Last month, on March 14, the UK Supreme Court rejected Assange’s request to appeal against his extradition sanctioned by the High Court in London, making his extradition very likely.

Later this month on April 20, the Westminster Magistrates’ Court, which had earlier declined the US extradition request, is expected to issue the order to extradite as per the High Court’s directive. The order is then to be passed on to the UK home office, which will have the final say to sanction the extradition.

Assange’s defense will have until May 18 to file submissions against his extradition before home secretary Priti Patel from the ruling Conservative Party government under Boris Johnson. The same home office had certified the US extradition request in June 2019 under Patel’s predecessor Sajid Javid in the previous Conservative government of Theresa May.

Supporters and family members of Assange have called on the Johnson government in the UK and the Joe Biden administration in the US to stop his continued persecution. Speaking to reporters, Assange’s wife Stella Assange, who has for long been campaigning against his extradition, called his continued imprisonment as both a “national disgrace” and a “criminal act”.

Arguing that the extradition treaty between the US and UK explicitly prohibits extradition for political offenses, she pointed out that the UK could have easily ended Assange’s imprisonment as per the treaty.

While calling for his release, Stella Assange pointed to his deteriorating mental and physical health, the UN special rapporteur’s report of psychological torture inflicted on him, and the recent revelations of snooping and even rendition and assassination plans made at the highest levels of the US government.

“The UK is imprisoning a publisher on behalf of the foreign power who conspired to murder him. There is no way of concealing any more that Julian is the victim of a vicious political persecution,” she added.

Demonstrations were held in different parts of the world on Sunday, April 10, calling for Assange’s release. In London, vigils were held at the Ecuadorian embassy, the Westminster Magistrates’ Court and the Belmarsh prison, while slogans and banners were projected on different buildings in the city.

Happening now: Demonstrators outside the British Embassy in D.C. protest Julian Assange’a likely extradition to the U.S. marking the third anniversary of his arrest pic.twitter.com/a3OEZm2Roe

Meanwhile, a group of progressive public figures from around the world have called on the US government to drop the prosecution against Assange. The call was made in a letter addressed to US president Joe Biden and house speaker Nancy Pelosi and signed by nearly three dozen progressive voices like Dilma Rouseff, Yanis Varoufakis, Roger Waters, Andre Arauz and Rafael Correa.

Asking for all 18 federal charges against Assange to be dropped, the signatories argued that “such a gesture… will send a strong message to the world: that freedom of expression, freedom of thought, and freedom of the press constitute an instrument that can controvert the interests of any government, including that of the United States of America.”

“It would affirm the defense of this Fundamental Human Right and would undoubtedly represent a clear and robust sign that everyone can express their opinion without fear of retaliation; that all the press outlets can give news to all the citizens of the world, with the certainty that the pluralism of thought is guaranteed,” the letter further added.

Once extradited, Assange will face a federal grand jury in the US for indicting him on 18 charges. All but one of these charges are under the infamous US Espionage Act, and carry a combined maximum prison sentence of 175 years.

The charges are related to Wikileaks’ publication of classified documents exposing US war crimes in Iraq and Afghanistan, and also other major violations of international laws. Rights groups and Assange’s supporters have long argued that the prosecution represents a major attack on press freedoms both within the US and around the world. 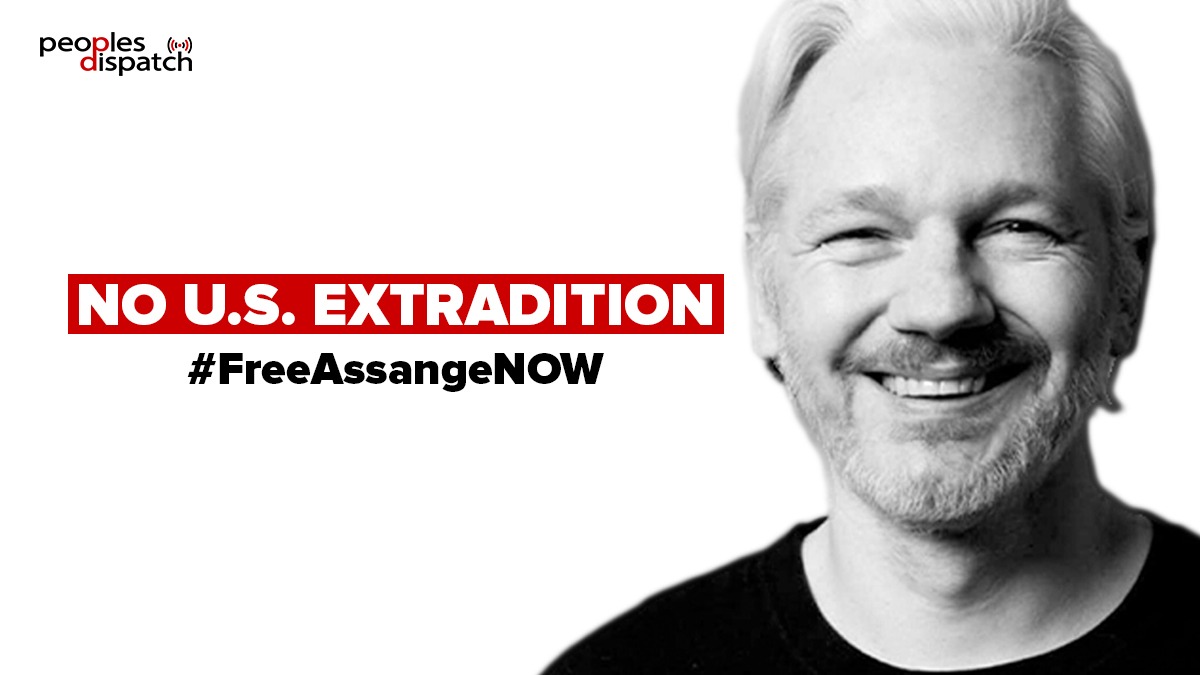