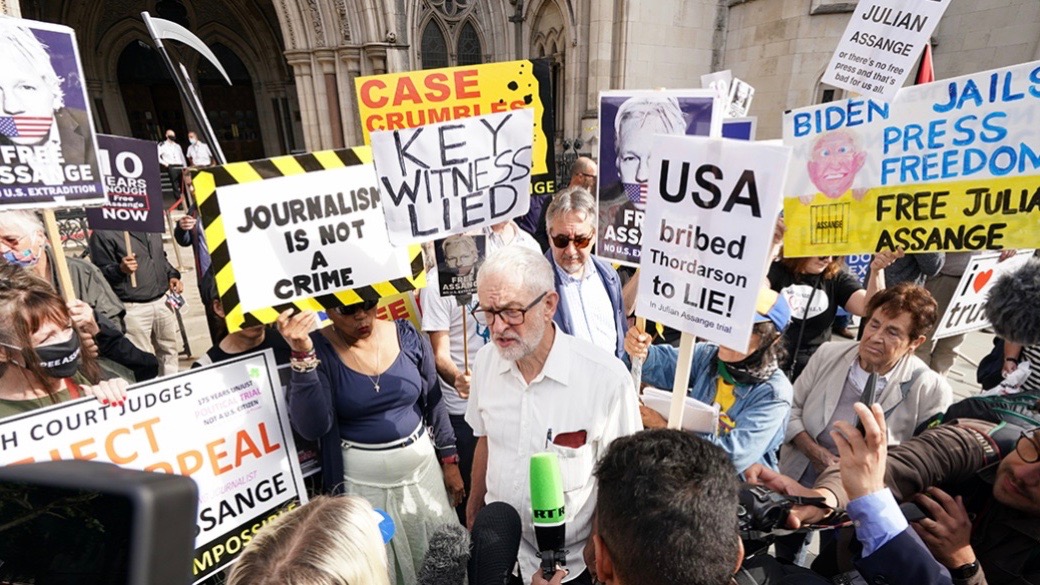 The plight of publisher Julian Assange has captured the attention of people’s movements, journalist and jurist associations, and concerned citizens across the globe. Assange has spent the past three years languishing in Belmarsh Prison in the UK, after having spent six years inside the Ecuadorian embassy in London. These nearly 10 years of confinement have had disastrous consequences on Assange’s mental health and whilst in Belmarsh, he has weathered several COVID outbreaks.

What crime could the journalist Assange have committed that would warrant such a punishment?

Assange and his organization Wikileaks published millions of leaked documents, including many from US intelligence workers that pointed to gross violations of human rights that occurred in the US’ numerous military deployments and wars abroad, oftentimes with the state institutions being fully aware.

As Australian John Pilger put it he “exposed the secrets and lies that led to the invasion of Iraq, Syria and Yemen, the murderous role of the Pentagon in dozens of countries, the blueprint for the 20-year catastrophe in Afghanistan, the attempts by Washington to overthrow elected governments, such as Venezuela’s, the collusion between nominal political opponents (Bush and Obama) to stifle a torture investigation and the CIA’s Vault 7 campaign that turned your mobile phone, even your TV set, into a spy in your midst.”

It is unsurprising then, that the unjust prosecution of Julian Assange has received bipartisan support in the US. While it was Trump that charged him under the espionage act and called for his extradition, Joe Biden has continued ahead with the case against him. Through their revelations, Assange and Wikileaks’ endangered the hegemonic narratives and agenda of the powerful by empowering common people with the information they need. The leaks were not only published in hundreds of news outlets globally to inform millions of people but the information has also been crucial for victims of the crimes mentioned in the leaks in their struggles for truth and justice.

Let’s take a look at some of the major revelations.

Undermining legitimacy of the ‘global war on terror’

In April 2010, Wikileaks published a video, from July 2007 showing US forces firing indiscriminately at civilians from a helicopter in Baghdad, killing two Reuters journalists along with several innocent civilians. The video, called “Collateral Murder”, busted the US Defense Department’s claim that people killed in the incident were “terrorists”, and was a huge embarrassment for the occupation forces.

Prior to this video, Wikileakes had published the US forces’ Rules of Engagements in Iraq in 2007. This information helped independent media to verify that most of the operations carried out by the occupation forces were in complete disregard of their own rules and yet no one was punished.

The Afghan and Iraq War Logs published in 2010 thoroughly expose the attempted whitewashing of the atrocities and human rights violations committed by the US and other international forces against innocent civilians in these countries.

These and several subsequent leaks about the defense establishment have undermined the tailored narrative of the so-called ‘global war on terror’ as a necessary step to ensure global peace and security. The leaks have uncovered the imperialist nature of the war with windfall gains for the military-industrial complex.

Revelations of torture undermine US legitimacy

The Gitmo Files published in 2011 and documents related to detainees’ policies published in 2012, provide uncontested evidence of US’ involvement in systemic human rights violations in the so-called “black sites” in various parts of the world and the detention center in Guantanamo Bay in Cuba. Apart from helping ex-detainees such as Khalid al Masri to get partial redressal, these files provided material evidence of torture carried out by the CIA and how it misled the Red Cross inspectors.

Wikileaks also revealed that US authorities deliberately kept nearly 150 men in prison for years despite knowing that they are innocent. People were kept under inhuman conditions in the name of fighting terrorism only to strengthen the control of the US. For instance, Al-Jazeera journalist Sami al-Hajj was detained in Guantanamo Bay for years despite the CIA knowing very well that he had no links with terrorism. His prison time was lengthened only so that the CIA could extract internal information about the working of the media house.

US spying on allies and foes alike

Diplomatic Cables released in 2010-11 and the NSA secret files released in 2016 proved that the US used its embassies and secret agencies to carry forward its agenda across the world. The cables which were carried by major publications worldwide confirmed the speculations about US’ interventions in the day-to-day decision making of several countries. It gave evidence of how US embassies protected authoritarian governments if they allied with the US and plotted against popular governments for defying its diktats.

The documents revealed that the US also used its embassies to bully host countries and force them to follow its agenda, particularly in Latin America. The revelations led to massive diplomatic and political upheavals in many of these countries. In Bolivia, the US embassy used its aid agency USAID to promote its own interests and divide Indigenous groups. The US embassy in Venezuela tested and recruited officials to spy against the government. In Peru, it was revealed how Keiko Fujimori conspired with the US embassy to reinstate her father Alberto Fujimori to power through a coup.

The US embassy’s shopping list published in 2018 showed how the US embassy in Guatemala advertised for polygraph coordinators in 2018 in an apparent move to prevent asylum seekers from “lying” about the persecution they faced in their country.

The case of Chagos Island exposed in diplomatic cables provides a classic example of how the US exploited the cause of environmental protection for its own strategic gains and denied people their rights. According to the cables, US authorities conspired with the British to establish the “world’s largest marine natural reserve” in Diego Garcia just to prevent hundreds of locals from reclaiming their lands lost due to a US military base in 1966.

Busting myths about US democracy

Presidential hopeful Hillary Clinton’s emails were leaked (hacked from John Podesta, Clinton’s campaign chair) in October 2016 by Wikileaks. The leaked emails established the dubious nature of her presidential campaign and according to many, cost her the election. They also provided evidence of how the US elections, celebrated as the world’s most free and fair, are manipulated by big capital and certain interest groups with the use of money.

The leaked emails proved what Jeff Stein said in a Vox piece in 2016 about Clinton telling “her audiences in front of her more or less what they want to hear” without any real intention of fulfilling her promises. This has been a standard campaign strategy adopted by most other candidates in US elections, as has been proved once again by the Biden administration.