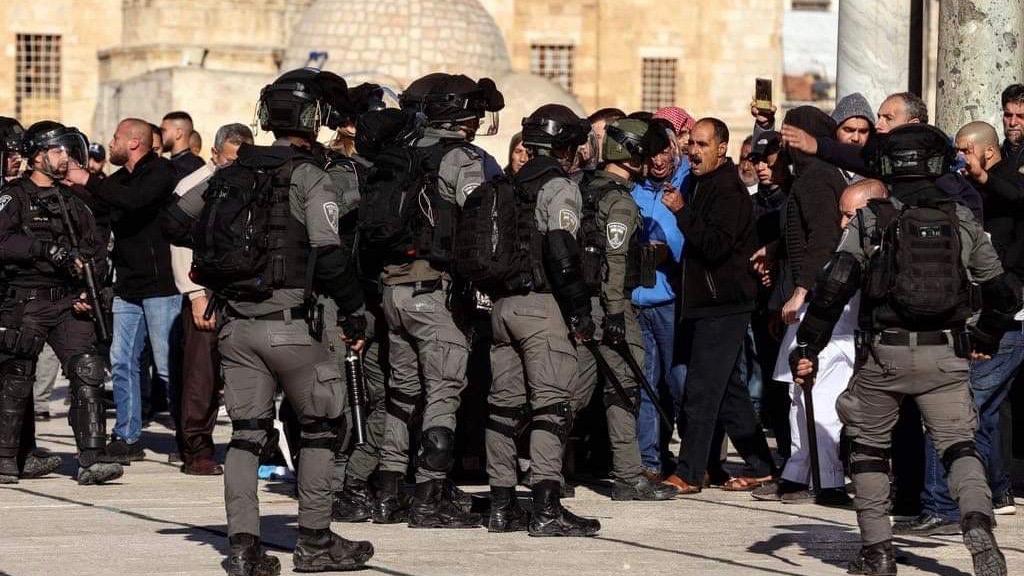 On Friday, April 15, scores of Israeli security forces stormed the Al-Aqsa mosque compound in occupied East Jerusalem when thousands of worshipers were performing morning prayers during the holy month of Ramadan. The video footage of the attacks circulating on social media show that Israeli forces carried out large-scale violence against the Palestinians.

There were a large number of women and children among the worshipers when the occupation forces entered the compound from the Moroccan gate firing at them with rubber bullets, stun grenades and tear gas without any provocation or warning. Palestinian youth deployed at the venue to guard the worshipers retaliated with stones pelting.

More than 150 people were injured in the attacks, according to the Palestinian Red Crescent which also claimed that it treated dozens more at the site despite Israeli forces trying to prevent them. The occupation forces also prevented ambulances from reaching the venue.

According to Times of Israel, the Israeli security forces denied that they had entered the mosque compound, instead claiming that the Palestinians inside burst firecrackers and hurled stones at them. However, in the video footage shared by a number of Palestinians, the Israeli forces are seen attacking the worshipers. The video also shows Israeli security forces holding down some Palestinians and pinning them down on the floor with their hands tied behind their backs.

Not content with smashing it’s stained windows, attacking protestors from outside and blocking medical assistance to those injured (some seriously), Zionist forces are now *inside* al-Aqsa mosque assaulting and detaining Palestinian worshippers. Zionism is unadulterated fascism. https://t.co/UFbc7xAKRg

At least 400 Palestinians were arrested during the raids. The security forces were also seen attacking media persons inside the mosque compound who were trying to cover the attack.

The Israeli forces could be seen attacking women and elderly persons without any provocation. They also created panic among the medics on the site who tried to take shelter from the violence.

The video below shows a soldier attacking a journalist covering what’s happening at #Aqsa compound a few hours ago.

On one of the holiest days of the year, Israeli soldiers & police stormed the #Aqsa mosque & attacked worshippers.

Reports of 67 injuries so far. 1/3 pic.twitter.com/zZQ92QgFTq

Palestinian Authority president Mahmoud Abbas called the increased Israeli violence on Palestinians “unbearable” and asked for immediate international intervention to end the occupation. Hamas also issued a statement saying that all Palestinians are behind those who are struggling against the occupation in East Jerusalem.

Israeli forces regularly storm the Al-Aqsa compound in violation of agreements related to governance of holy sites inside occupied Palestine. They often allow right-wing Israelis to storm the site as well. This year, an Israeli extremist group has given the call for performing Passover sacrifices inside the compound despite the fact that such rituals are not allowed.

Last year, Israeli attacks on Al-Aqsa, in which more than 300 Palestinians were injured, led to an escalation of violence across historic Palestine and an 11-day Israeli offensive in Gaza killing at least 260 Palestinians and causing massive damage to civilian infrastructure.

According to Wafa news agency, Israel has imposed various restrictions on Palestinian worshipers. It has a policy of not allowing men from the occupied West Bank who are below the age of 50 to visit the al-Aqsa mosque. The majority of worshipers from the West Bank are either women or men above the age of 50. Other worshipers come from occupied East Jerusalem and Israeli towns and cities.

Despite the various Israeli restrictions, thousands of Palestinians visit the mosque everyday during Ramadan. On Fridays, the number of worshipers goes up to tens of thousands.

Anyone wondering what Israel’s endgame is should look at the last few days in which it has killed 14 Palestinians, sown chaos across the West Bank, and wounded dozens of worshipers during Ramadan. This is an apartheid regime by choice, and the goal is to preserve it at all costs.

The Israeli attacks on Palestinian homes in refugees camps in Jenin, Nablus and other places increased after prime minister Nafatli Bennett gave a “free hand” to the security forces to curb what he called “terror attacks.” A number of individual attacks have been carried out by Palestinians inside Israel since March 22 in resistance to the Israeli occupation and endless violence.

Palestinians in Ramallah and Bethlehem observed a day of strike on Thursday to protest the recent killings by the Israeli forces, Wafa reported.