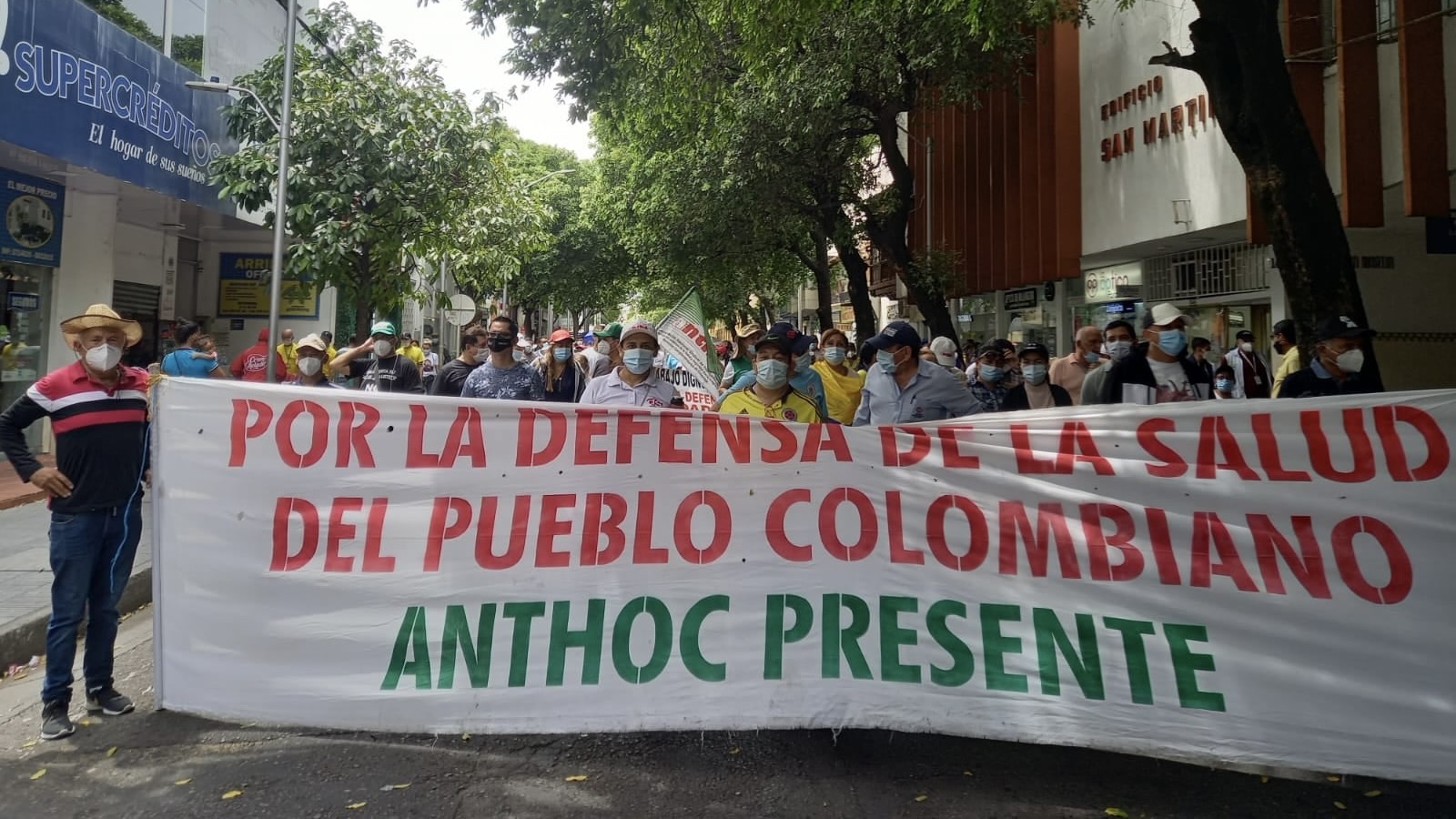 "For the defense of health of the Colombian people. ANTHOC present". Photo: ANTHOC

The healthcare system in Colombia finds itself in a very precarious position after decades of the implementation of a neoliberal, pro-privatization agenda. Commercialization has led both to deteriorating working conditions for health workers and obstacles to access for a majority of the population, so it comes as no surprise that the incoming change in administration is seen as an opportunity to change course.

Following the historical victory of Gustavo Petro and Francia Márquez at the 2022 presidential election in Colombia, there is widespread sense of hope for rebuilding all aspects of the social support system, including healthcare. People’s Health Dispatch met with Jaime Urrego, a public health physician and a member of the transition group of the Gustavo Petro and Francia Márquez government. Urrego is a university professor and activist in the People’s Health Movement Colombia circle.

People’s Health Dispatch: Let’s start with the fact that the Petro-Márquez victory was quite significant for all of Latin America and the Caribbean, and for the world. Can you tell us a little bit about what that victory means in the health field? What that bigger picture might mean for the Colombian people?

Jaime Urrego: This is the first time in Colombia’s history as a republic, so in about 200 years, that there is a victory of a people’s government. It is an alternative government that comes from a broad range of center-left [forces], from a front composed of many forces that wanted change. In this context, this means that Colombia has had 28 years of a health system that has been dominated by the neoliberal logic, what is called structural pluralism wherein the market has dominated the organization, regulation, administration, and the provision of health services. So there is an expectation of change in the health system in order to guarantee the fundamental right to health.

PHD: Going back a little bit, what is the situation of access to health for people in Colombia?

JU: Well, it is Law 100 of 1993, which was part of a package of neoliberal measures introduced that affected different rights, the right to education, the right to health, the right to work, the right to land, and so on. They introduced a series of laws and reforms which included Law 100, which reorganized healthcare into a model aligned with the framework of the Washington Consensus and established a system based on the principle “less state, more market”. This model, which is used in few countries in the world, is organized by a separation between the government as an administrator and payer, separate from providing health services and the citizens. This system designed in that time is based on these four pillars. The government organizes the network of healthcare providers, it pays the services and is supposed to address the needs of the citizens, this is the general idea of how it is supposed to be organized. However, what has happened in the last 28 years is that this model has led to privatization.

At the moment, the health system includes intermediary actors called EPS (Health Promoting Companies) who are supposed to enroll people, organize networks of services, assess health risks, and pay. However, within the neoliberal doctrine they were introduced to reduce transaction costs and to separate the payer from the provider, which are all formulas that had been in use since the 1980s, and which have caused serious problems.

These actors are seeking profit, so they set up in places where it is convenient for them i.e. in the big cities and peasants, people in rural areas, and people in poor neighborhoods of many cities – close to 20 million or 40% of the population – have serious problems of accessing [health]. The way the system is set up means that it is dependent on the person’s ability to pay, so you have to be from a relatively privileged group in order to access care. These are some of the major problems: the [state] abandonment and lack of access for more than 20 million people.

PHD: Considering this panorama, what are the priorities of the new government in trying to transform health care?

JU: Well, it is necessary to go in two different tracks. In the first days of August, the new government will inherit a system which has serious financial problems. The health system is currently financially unsustainable as many providers went bankrupt in the search for profitability, there are more than one million health workers employed through precarious contracts, and they will need to make sure services are delivered.

In this context, measures will be taken to implement a universal preventive model. Second, we are going to enforce legislation to guarantee that workers in the health sector have decent and dignified work. Third, we are going to look for mechanisms that will allow the resources to reach the providers directly, without a middle man.

Parallely, but in the longer term, after a big national discussion we will present a reform in Congress that will bring a debate to the representatives of the population in the Congress, a reform that will allow us to advance towards a universal, public, free at the point of delivery, participative, and decentralized system.

PHD: You mentioned that through that same neoliberal package, workers’ rights have also been undermined. We have seen quite a lot of agitation in that sector of workers since the beginning of the COVID-19 pandemic. Could you comment a little on the situation of workers in the health sector?

JU: One of the main problems is that the labor rights that are guaranteed by law through a labor contract with all the social benefits, despite the fact that the regulation exists, it is now followed through on.

We are approximately 1,100,000 people in the health sector, and it is estimated that close to 700,000 do not have labor contracts with all the guarantees. This means three-month contracts with very poor payment and widespread delay of salary payment for many, many contract workers. These three elements constitute what we call labor precariousness, which has been dominating the life of health workers. There is a tremendous divide between different groups, like between the super-specialists, who are a tiny minority, and the larger base of health service providers who deliver care across the country.

PHD: The motto of Vice President-elect Francia Márquez is vivir sabroso, living deliciously. What is the meaning of that motto in the context of health and access to health?

JU: Well, it is very simple. It simply means that rights must be guaranteed, that there people can have el buen vivir, good living. In other words, the social determinants of health are affected in a positive way.

Colombia is one of the most unequal countries in the world, despite being a middle income country, belonging to the OECD, and having a great medical tradition. Yet, social inequality is very widespread.

When Francia Márquez speaks of vivir sabroso, she means that all human beings, regardless of their ability to pay, can enjoy basic rights, and they can live with dignity. When she speaks about this concept, she also says, until dignity becomes a custom. In the context of health, it means to guarantee the right to health. Nothing more than that.

PHD: Is there anything else you want to add?

JU: It is a time of great expectation and great hope in Colombia. We know that the only way [these changes] will take place is through a people-centered, participatory process that truly allows for the new government to undertake the reforms and the processes that must be taken forward.

We have a very important task that has to be deeply connected with the people’s movements and forces of the country in all its diversity: peasants, Indigenous people, Afro-Colombians, urban dwellers, in order for the transformations which I spoke about to be put into practice. 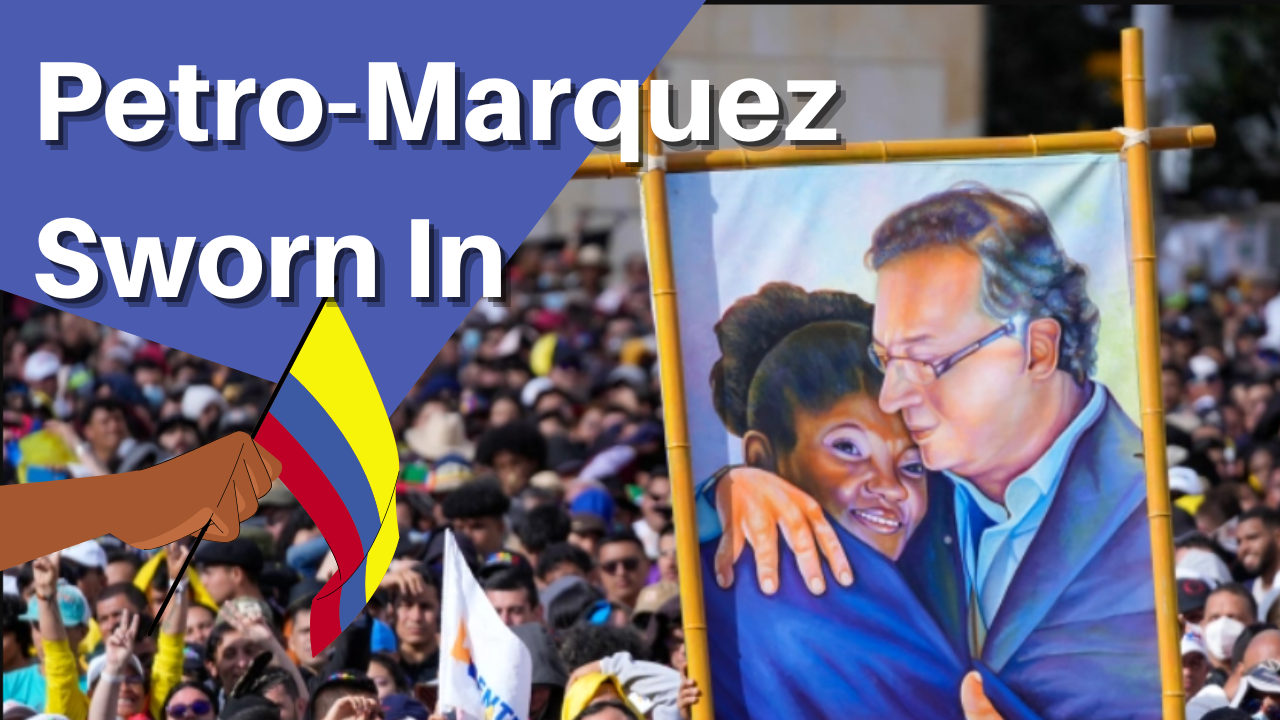 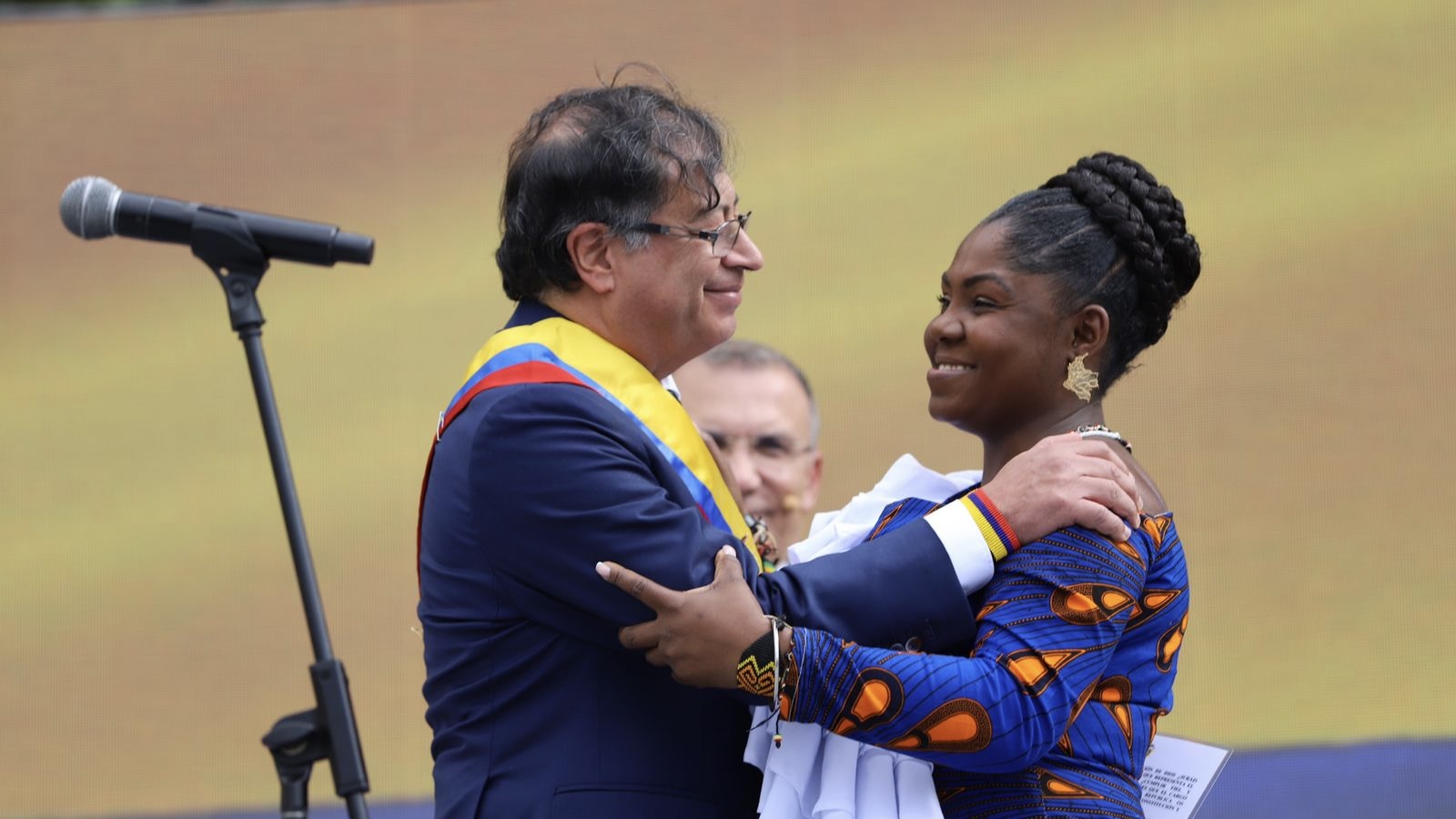