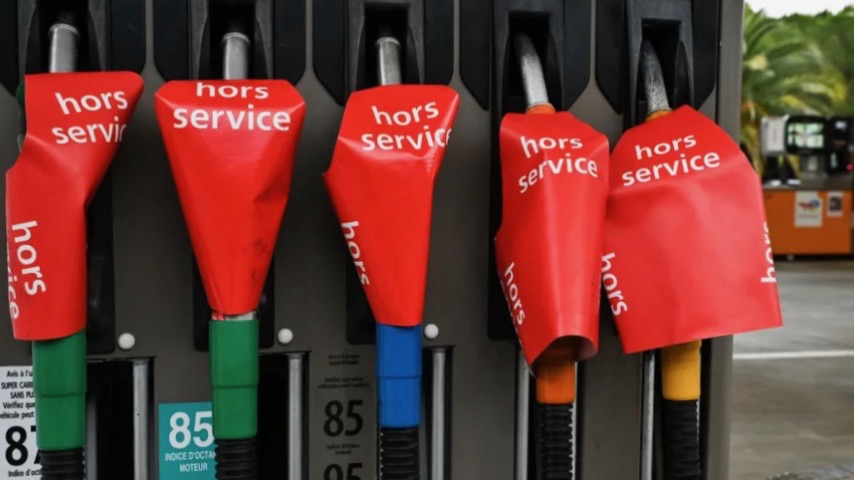 Strikes by workers in the energy sector in France have caused a major crisis in fuel supply across the country. The strike by workers in fuel depots and refineries of French oil major Total Energy demanding a hike in wages has now entered its third week, resulting in an acute shortage of fuel. Under pressure, Finance Minister Bruno Le Maire in a media interview on Thursday, October 13, urged Total Energy to raise the workers’ wages. Strikes are also taking place in some refineries of Esso-ExxonMobil. On Thursday, workers at Électricité de France’s (EDF) Bugey nuclear plant also started a strike seeking decent wages.

Trade unionists from the General Confederation of Labor (CGT) and others have been organizing demonstrations in solidarity with the protesting workers. The strikes have added to the difficulties of authorities in the energy sector prior to the winter and amid an energy crisis due to sanctions on Russian gas supply. According to reports, because of the strikes, the country’s petrol output has reduced by 60% and also left one in three petrol stations out of stock.

CGT highlighted that Total Energy earned 18.7 billion euros (USD 18.29 billion) in super-profits in the first half of 2022 and distributed 2.5 billion euros (USD 2.42 billion) in dividends to its shareholders. This is when a refinery operator with 14 years of seniority in the company earns just 2,300 euros (USD 2,227.32) in gross income, without bonuses or profit-sharing. The union has demanded a wage increase of 7.5% at par with inflation in 2022, and a bonus of 6,000 euros (USD 5,810.40) at par with the profits earned by the company. Major energy producers and distributors across Europe have made super-profits from the energy crisis triggered by the Russia-Ukraine war. Meanwhile, European countries including France are facing an acute cost of living crisis marked by skyrocketing food and fuel prices. On October 13, activists from the left-wing coalition New Ecological and Social People’s Union (NUPES) protested in front of the headquarters of electricity distributor Engie against high electricity charges.

Trade unions like CGT and working class sections in France have organized massive protests demanding a hike in salaries and pensions to restore the purchasing power of workers amid the soaring inflation. However, President Emmanuel Macron and his government have tried to put the onus of the crisis on the protesting workers. The government has issued requisition orders to break the strike and resume work at certain depots of the oil companies.

On October 12, L’Insoumisson, the publication of the leftist La France Insoumise (LFI) party, accused the government of launching a serious attack on the right to strike. “The government preferred to requisition the workers, rather than the super-profits of the oil multinationals. Super-profits that could have financed the main demand of the employees: increases in salaries, while inflation continues to strangle the French,” the party said.

French Communist Party (PCF) leader Fabien Roussel stated that “if petrol prices are increasing in the country, the culprits are the oil companies who resort to profiteering even amid the crisis.”

The National Federation of Mines and Energy Workers affiliated to CGT (FNME-CGT) also criticized the state-led repression of  protesting workers.