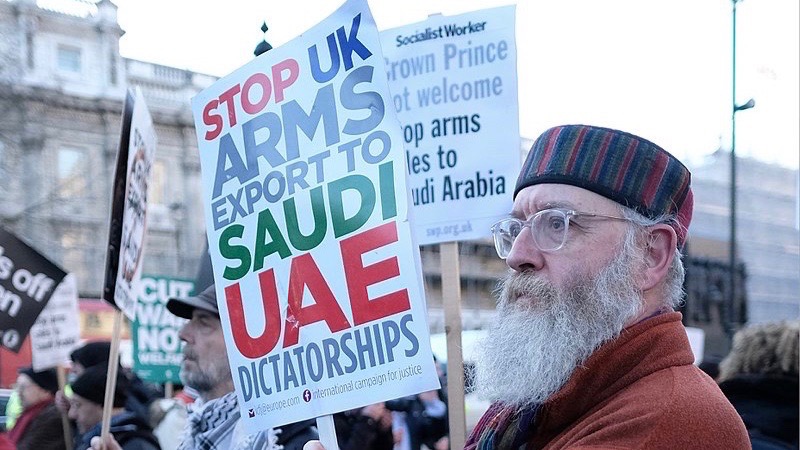 According to an Oxfam report published on Wednesday, January 11, at least 87 Yemeni civilians were killed and 136 wounded in airstrikes carried out by the Saudi Arabia-led military coalition between January 2021 and February 2022 using weapons supplied by the UK and the US.

The report titled “Armed airstrikes part of ‘pattern of violence against civilians’ in Yemen” claims that at least four attacks were carried out daily during these 14 months, with a quarter of them being airstrikes.

The period saw a total of over 1,700 attacks by the Saudi-led coalition forces inside Yemen, of which 431 were airstrikes. At least 19 of the airstrikes had targeted hospitals and clinics.

An overwhelming 39% of the attacks were reported to have destroyed civilian homes or shelters, leading to large-scale forced displacement. Oxfam clarified that these figures do not include the widespread destruction to other civilian infrastructure that was caused by airstrikes carried out by the Saudi-led coalition.

According to the UN, close to 400,000 civilians have been killed due to the war in Yemen. Over 10,000 were killed directly in the war, while the rest died due to starvation, disease, and lack of health facilities with the destruction of civilian infrastructure and the Saudi-led blockade imposed on the country.

Weapon supply to Saudi Arabia and its allies must end

Martin Butcher, arms and conflict policy advisor at Oxfam and the author of the report, claimed that the “intensity of these attacks would not have been possible without a ready supply of arms.” He said that the “UK government and others must immediately stop the arms sales that are fuelling war in Yemen.”

Saudi Arabia uses Typhoon and Tornado aircrafts supplied by the UK and F-15s supplied by the US to carry out airstrikes inside Houthi controlled areas of Yemen. These areas house the majority of the Yemeni population and include most of the major cities, including capital Sanaa, Saada, and the Hodeidah port.

UK-based CAAT has filed a lawsuit in the UK claiming that by selling arms to Saudi Arabia, the UK government is ignoring possible war crimes. Oxfam stated that the report is part of its attempts to “provide expert witness in support of the legal challenge.”

Arms sales were resumed by the UK in 2020 by the government of Prime Minister Boris Johnson despite a court ruling in June 2019 that arms sales to Saudi Arabia for use in Yemen were illegal. This ruling was given in a previous lawsuit filed by CAAT.