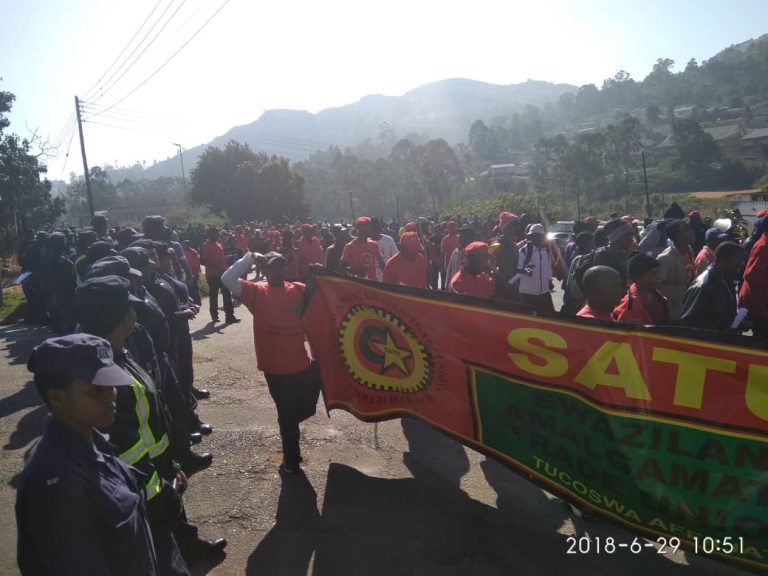 Four union members were severely injured in the attack by the police. Photo: Communist Party of Swaziland

Last week, Swaziland’s police force launched a crackdown on workers who were demonstrating against the kingdom’s policies in the capital city of Mbabane. On June 29, hundreds of workers marched towards the office of Deputy Prime Minister Paul Dlamini to hand over a petition against various anti-working class policies and the corruption under the government of King Mswati III. The landlocked African country is an absolute monarchy, and in April, changed its name to eSwatini.

The protest, led by the Trade Union Congress of Swaziland (TUCOSWA), was blocked by the police near the Dlamini’s office. As the workers asserted their right to protest and demanded that they be allowed to submit their petition, they were attacked by the police.

Muzi Mhlanga, Acting General Secretary of  TUCOSWA, told The Dawn News that as hundreds of protesters peacefully marched to submit their demands, the police unleashed rubber bullets, tear gas and water cannons on them.  Four union members were severely injured in the attack.

“The City Council of Mbabane refused to allow our members to use the main streets. We were prevented by the police from delivering a petition to the Deputy Prime Minister’s office and were forced to give the petition to the Principal Secretary in the middle of a back street,” said Muzi.

The workers demanded that the minimum wage be increased from the current  E600 (Swazi emalangeni) a month (for a skilled worker). The minimum wages were last raised in 2011. TUCOSWA is demanding a minimum wage of E3,500 a month so as to meet the cost of living in the country. The protesters are also demanding an elderly pension of E1500.

Condemning the increasing attack on the working class, the petition demanded an end to the influence of labour brokers (contractors/middlemen), overtime payment for 12 hours of work, the reinstatement of long service benefits and and the scrapping of taxes on benefits. They also demanded that support staff in schools be officially hired by the government.

A major demand was the doing away with of the Public Enterprises Act that restricts collective bargaining. Section 10 (1) of the Act, according to the unions, limits the possibility of collective bargaining for negotiations as it restricts ‘A Public Enterprise’ from “making any major adjustment to the level or structure, of tariffs prices, rates or other fees or charges.

Pointing to the millions of emalangeni (Swaziland’s currency) spent on the lavish birthday celebration of King Mswati III in April,  the protesters said that rampant corruption was plaguing the country. It is alleged that money for the celebration was siphoned off from the national pension fund by the government. The kingdom’s parliament instituted an inquiry into the scandal, but it was later suspended.

The Communist Party of Swaziland, in a statement, said that “about 70 percent of the people of Swaziland survive on less than US$2 a day, but on 19 April 2018, they were forced to pay over E1 billion (about US$75 million) to finance Mswati’s birthday party.”

According to the World Food Program (WFP),  350,000 people ‘were in need of emergency food assistance’ during the April 2016- November 2017 period. The WFP, in its May 2018 brief further notes that “Chronic malnutrition is a main concern in Eswatini: stunting affects 26 percent of children under the age of five. An estimated 77 percent of Swazis rely on subsistence farming for their livelihoods.”

Muzi pointed out that rising electricity costs were severely affecting the working class population in the country. “We are also seeking an increase in fund allocation for affordable education and health,” he said in the telephonic conversation.

Talking about the need to strengthen the health sector, Muzi said “the government pharmacies lack medicines and people have to approach private pharmacies which sell these medicines at an exorbitant price.”

Swaziland is one of the countries with the highest prevalence of HIV/AIDS in the world, and according to activists, the neoliberal agenda and structural adjustment programs have led to a further decline of the health, education and sanitation sectors. The move towards the privatization of essential services has led to a considerable increase in the cost of living, while a large section of the country still lives in poverty.

Yet another demand of the protesters is the return of land to sugarcane farmers from Vuvulane. The land in question is Farm 860 in the Lubombo region from which tenant farmers were evicted by VIF Ltd. company owned by former Prime Minister Tibiyo Taka Ngwane. Allegedly under direct orders from the king, the sugarcane farmers were not allowed to cultivate 450 hectares of land. The issue led to a long judicial battle, and also saw a mass movement by the farmers. Currently, VIF Ltd still holds the land while farmers continue to assert their right over the land they have been cultivating for long.

The history of Swaziland has been long marked by numerous people’s movements and struggles. Though the constitution promises equality, the King is considered to be above the law. In 2011, the then Swaziland Chief Justice Michael Ramodibedi issued a directive protecting the king from civil cases after local villagers alleged police had seized their cattle to add to the king’s herd.

Civil and political rights are curtailed in the country, and political parties are banned. Most of the members of Parliament (Libandla) are appointed by the king while a few are elected through a secret ballot.

In September 2017, the police stopped a pro-democracy meeting, saying that the organizers had not received permission to organize the event. Under the country’s Urban Act, protesters are required to give two weeks’ notice before a public protest, and according to Human Rights Watch, this is used by police to stop protests and harass protesters.

According to reports, the king recently proclaimed that from June 30, parliament would be dissolved and decision making would rest in his hands and that of a council of ministers.