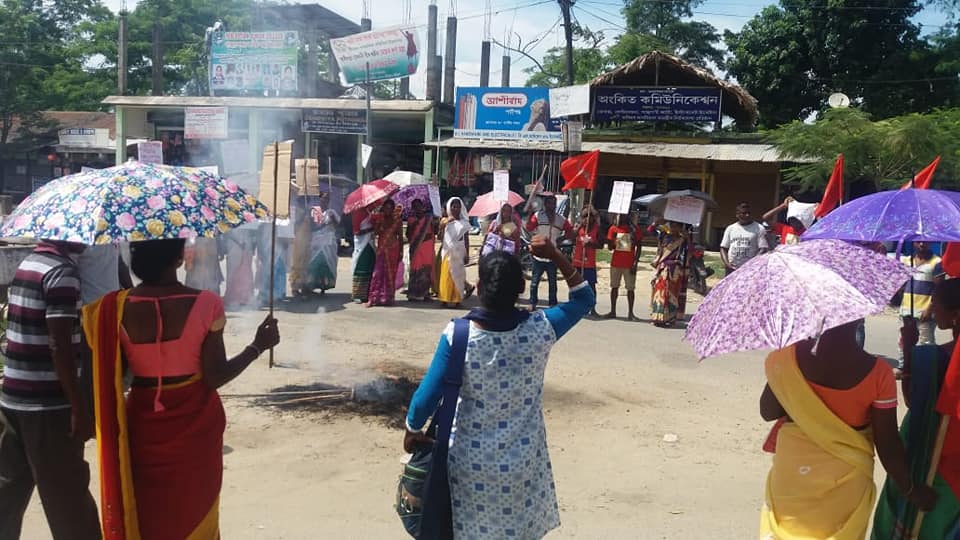 “For the tea, we enjoy every morning or every time we relax, the workers only get less than $1.94 per day,” said Bibek Das, a central committee member of CPI (ML) speaking to Peoples Dispatch.

Tea workers have repeatedly gone on strike in the past, demanding a wage hike, citing the appalling living and working conditions they have to face in the close to 800 tea estates and 100,000 smaller tea gardens in Assam. They employ close to 1 million people, a majority of them being women from the Adivasi communities in the neighbouring States. With an annual production of over a million tonnes, Assam accounts for nearly half of India’s total tea production. Almost a fifth of the State’s population of about 32 million is estimated to be living on tea estates, and most of them are in upper Assam. In July this year, the government of Assam decided to give the workers an interim wage hike of 30 rupees per day, bringing the wages of tea workers in the Brahmaputra valley to 167 rupees ($2.37) from 137 and those in the Barak valley to 145 rupees ($2.06) per day. The government also decided to bring the workers under the coverage of two insurance schemes – the Prime Minister’s Jeevan Jyoti Yojana and Pradhan Mantri Suraksha Bima Yojana – adding that the total cost of premium for those two schemes is 342 ($4.85) rupees per person per year, which the government will be transferring to the workers’ accounts. However, all this comes nowhere close to the workers’ demands or the stipulations put forward by the committee.

The strike also comes in the backdrop of several investigations by international media organisations like the BBC and the World Bank’s accountability office for its private sector lending division in the last 2-3 years. The World Bank investigation in November 2016 found that the living and working conditions for the tea workers, as well as their wages were abysmal and substandard. The Plantation Labour Act of 1951 requires the plantation owners to provide the workers with certain basic amenities, including drinking water, separate toilets for men and women, housing and medical services.

A BBC investigation in September the previous year found the workers living in terrible conditions, earning extremely low wages. It described workers living in broken homes, with leaky roofs and cracked walls and with no access to toilets, forcing them to defecate in the tea bushes. Many toilets were also found to be broken or blocked. The investigation also reported severe malnourishment among the workers and their families, putting them at risk of serious ailments. Many workers were found spraying dangerous chemicals without any safety equipment. Also reported were cases of child labour in some of the tea plantations. Many workers had no electricity or drinking and running water in their homes, and many had no choice but to live next to open, clogged and stinking drains.

The investigations found other serious lapses in the tea plantations. They reported the workers not having access to proper healthcare and education services, resulting in very poor education and health levels, forcing the children of workers into tea plantation work as well. They also didn’t have the right to form or join unions as most tea plantations discourage union membership. Non-Governmental Organisations (NGOs) were also banned on many estates. Without unions or NGOs, workers have no means to organize and put forth their complaints and demands. The latest national health survey found that the maternal mortality ratio in upper Assam was almost double the national average, at 404 maternal births per 100,000 live births, also making it the worst in the country. The Infant mortality rate in Assam is also one of the worst in the country.

The combination of poverty, disease, low wages, malnourishment, poor living and working conditions and a lack of basic health care and education services has led to the tea workers ending up in a highly abusive and exploitative situation. Activists and tea workers say only action from the government and the plantation owners can help improve the situation and address the needs and demands of the tea workers.

The Indian State of West Bengal also recently saw similar strikes from tea workers demanding an increase in their daily wages. The joint forum – a body of all the tea workers except for those affiliated with the ruling Trinamool Congress (TMC) unions –  went on a three-day strike on August 7. The workers were demanding that the minimum wages act applicable in the state of West Bengal also be made applicable to them. Until now, the workers had their wages revised at three-year intervals. At a meeting between the government and the joint forum to discuss the revision of the minimum wage on August 6th, the government proposed a minimum wage of 172 rupees ($2.43). The joint forum made a counterproposal of their own, asking for the minimum wage to be revised to 239 rupees ($3.38). More than 400,000 tea workers from over 370 tea gardens participated in the three-day strike in the Himalayan region of Darjeeling in West Bengal.