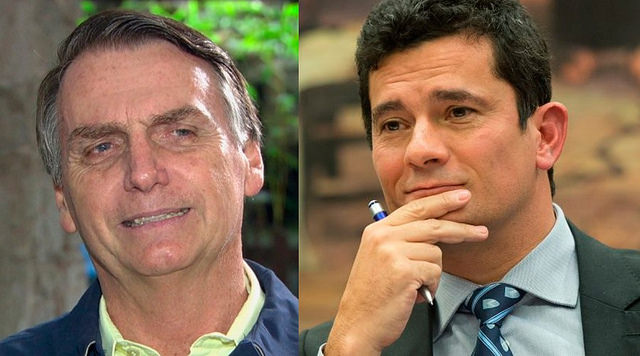 On November 1, judge Sergio Moro accepted the invitation from extreme-right wing president elect Jair Bolsonaro to serve as minister of justice. Sergio Moro is the federal judge who presided over the ‘Car Wash’ corruption scandal which investigated corruption in the Brazilian state-run oil company Petrobras. His central targets in the investigation were former presidents Dilma Rousseff and Luiz Inácio Lula da Silva.

The proceedings against Lula, led by Moro, were accelerated and marked by deep irregularities and lack of evidence. Lula is accused, by Moro, of having received a luxury beach side apartment, a “triplex”, from the  Odebrecht construction company in exchange for giving them Petrobras contracts, despite the apartment not being in Lula’s name. In July 2017, Moro convicted Lula of money laundering and sentenced him to nine years in prison. In January 2018, the ruling was appealed by Lula’s legal team but the Regional Federal Court not only held up Moro’s ruling but increased the sentence to twelve years.

On April 4, 2018, the Supreme Court of Brazil rejected the petition presented by Lula’s legal team for habeas corpus, which would have allowed him to continue the appeals process in freedom. The following day, judge Sergio Moro ordered an arrest warrant for Lula, giving him one day to turn himself into Federal Police. On Friday April 6, Lula presented himself to the Federal Police Headquarters in Curitiba and began to serve his twelve year sentence where he remains today.

The appointment of Moro as minister of justice is seen by many as an obvious reward from Bolsonaro for both pulling Lula out of the race, who polled much higher than Bolsonaro, and fostering the anti-PT campaign which was a crucial part of Bolsonaro’s victory.

The Minister of Justice under Dilma Rousseff Eugenio Aragão stated, “This confirms everything that we have said until today, that he [Moro] was not a judge. He was seeking a personal advantage for his career, cultivating his vanity, and well he got to where he wanted to be.”

Paulo Pimenta a Federal Deputy of the Workers Party (PT) commented on political significance, “This is a slap in the face to Brazilian society. Many people had maintained an illusion about the possible exception of judge Sérgio Moro and the Lava Jato case should be deeply disappointed to see him in the arms of Jair Bolsonaro, creating a government to ‘combat corruption’ along with Onyx Lorenzoni, Alberto Fraga, Magno Malta [Brazilian politicians who have been accused and some who have openly admitted to corruption]”.

“The reality, is that the next minister of justice is the person who helped Bolsonaro win the elections. He impeded Lula from becoming a candidate…The Public Prosecutor’s Office entered the playing field to have a stake in political debate. Moro helped Bolsonaro win the elections,” stated the National President of the PT Gleisi Hoffmann. She also stated that the nomination of Moro confirms the political nature of the legal crusade or “lawfare” against Lula.

Bolsonaro’s proposal is that Moro also have the responsibility of Public Safety which would mean that he would command the Federal Police.

Only five days have passed since Bolsonaro was elected, and presidency is already proving to be as divisive and dangerous as expected. One of the worrying threats made by Bolsonaro during his campaign was that he wants to categorize the peoples movements like the Landless Rural Workers’ Movement (MST) and the Homeless Workers’ Movement (MTST) as terrorist organizations and openly encouraged people to engage in violence against their members. Since Sunday, several MST camps have already suffered violent attacks and threats of eviction. On Tuesday October 30, the Comuna Irma Dorothy camp of the MST in the Ceará state was set on fire. 150 families live at the camp.

The Quilombo Campo Grande of the MST in Minas Gerais denounced yesterday that they are under threat of eviction due to a legal conspiracy between the big landowners, and regional politicians who respond to agribusiness and the ruralist group’s interests. The camp has been struggling for 20 years and currently is home to 450 families who produce and live on the land. (click here to support the Quilombo camp).

The international right has applauded Bolsonaro’s election. John Bolton the National Security Advisor of the US saluted what he and the US government see as a positive change for the region: “The recent elections of like-minded leaders in key countries, including Ivan Duque in Colombia, and last weekend Jair Bolsonaro in Brazil, are positive signs for the future of the region, and demonstrate a growing regional commitment to free-market principles, and open, transparent, and accountable governance…The troika of tyranny in this hemisphere – Cuba, Venezuela and Nicaragua – has finally met its match.”