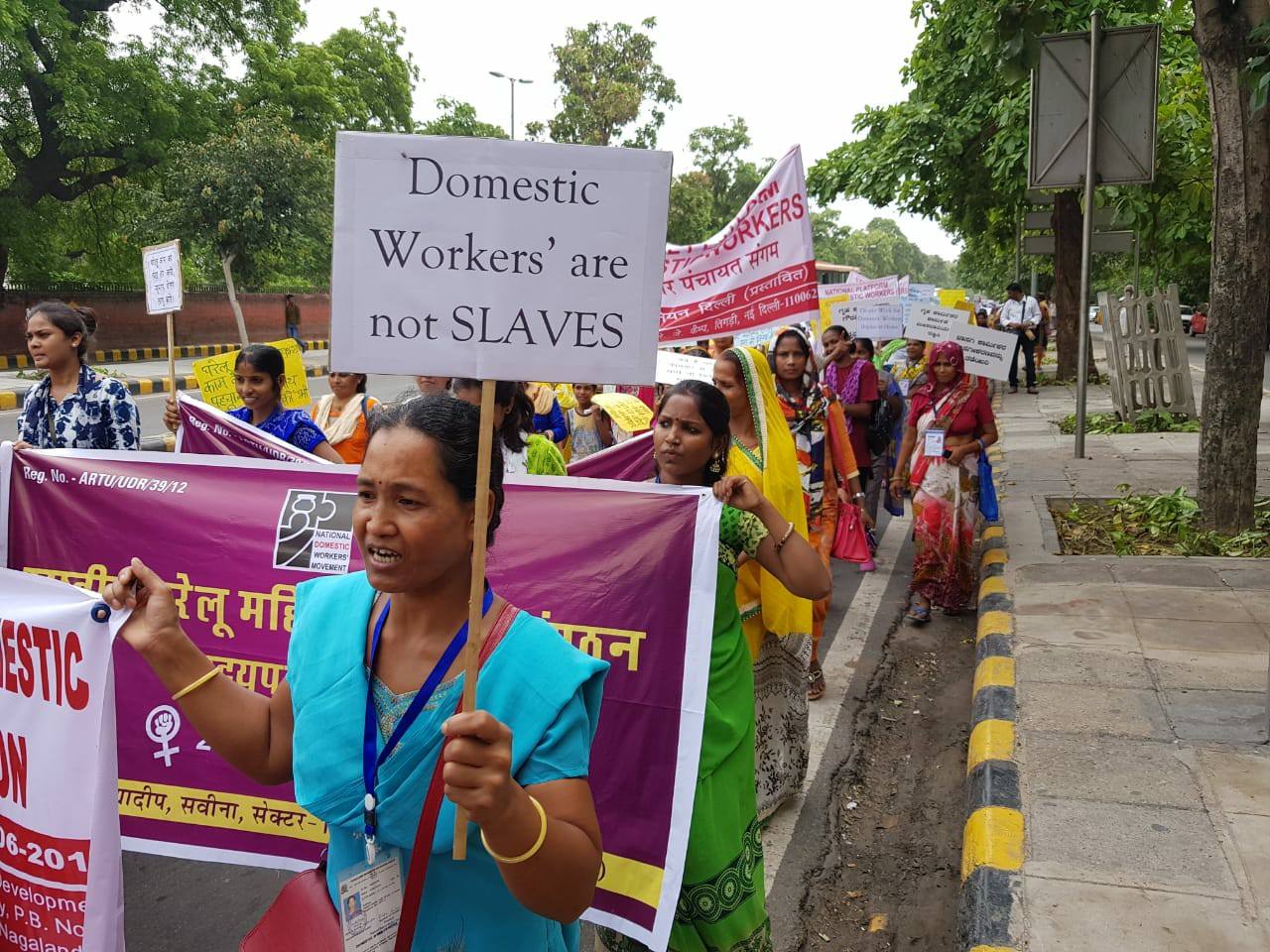 2 August 2018: Organised by National Platform for Domestic Workers, domestic workers, consisting 34 central trade unions and state unions, from all over the country had a big time rally and public meeting for a comprehensive legislation and withdrawal of the four proposed Labour Codes in Delhi. (Photo: Lima Rose)

The second Congress of International Domestic Workers’ Federation (IDWF) will be held in Cape Town, South Africa, from November 16 to 19. Founded in 2013, IDWF has played an important role in organizing and mobilizing domestic workers across the world to pressurize their respective governments to ratify Convention 189 of the International Labour Organization (ILO).

Passed in 2011 by the United Nations body dealing with labor issues globally, this convention stipulates that domestic workers should effectively be able to enjoy all the rights of formal employees – including the right to join and form trade unions, to have weekly leaves, to receive minimum wages, to access social security and maternity benefits, and to be formally employed with written contracts that specify the number of hours of work, and the notice period for termination of employment.

The struggle to get different countries to recognize these rights has been long and arduous, requiring coordinated participation of numerous unions worldwide. A milestone in this struggle, which has been ongoing for decades, came in 2006, when The Netherlands Trade Union Confederation (FNV) hosted a conference in Amsterdam for numerous trade unions, domestic workers’ unions and NGOs across the world.

Titled “Respect and Rights – Protection for Domestic/Household workers!”, this conference produced a set of recommendations, in accordance with which numerous domestic workers’ organizations started networking with each other, with assistance from the International Union of Food, Agricultural, Hotel, Restaurant, Catering, Tobacco and Allied Workers’ Association (IUF), Women in Informal Employment Globalising and Organising (WIEGO), the International Trade Union Confederation (ITUC), the Global Labour Institute (GLI) and the ILO.

The following year, at the ILC, “Decent Work for Domestic Workers” was one of the topics of discussion. Contentious issues, such as labour inspections of working conditions affecting the right to privacy of the households where the domestic worker is employed, were discussed.

A milestone for 100 million domestic workers in the world

As the workers persisted in insisting that domestic workers must have the rights that all other formally employed workers do, the second major milestone in realizing labor rights of the over 100 million domestic workers in the world was arrived at the 100th ILC in June 2011. The Convention 189 was adopted by the ILO at this conference, stipulating employment contracts for domestic workers, regulation of working hours, minimum wage, accesses to social security, right to form or join trade unions etc.

In October that year, more than 140 delegates from 104 different organizations were brought together by IDWN in the Asia regional conference, with assistance from ITUC, Global Network-Asia, Migrant Forum in Asia (MFA) and the Global Network. Technical and financial support was provided by the ILO. At the conference, Secretary of Labour and Employment of the Philippines, Rosalinda Dimapilis-Baldoz, announced that her country will ratify the convention by 2012. A manifesto was adopted at the conference, in which delegates committed that their organizations will work together in a coordinated manner to pressurize as many countries as possible to adopt ILO’s convention.

In mid-November 2011, Caribbean regional conference was hosted, in which a number of trade unions and women’s organizations from Antigua, Barbados, Guyana, and Saint Lucia came onboard with the two organizations leading the mobilization of domestic workers in the region – the National Union of Domestic Employees (NUDE) of Trinidad and Tobago, and the Jamaica Household Workers’ Association (JHWA). At the end of the conference, the Caribbean Domestic Workers’ Network (CDWN) was launched to serve as a regional platform over which numerous unions and organizations in the different countries in the Caribbean can coordinate their activities, share experiences and skills.

By the end of that month, an African conference was also organized, where at a workshop facilitated by WIEGO, participants from 15 countries shared with each other educational materials and their experiences and lessons from organizing domestic workers in South Africa, Benin, Hong Kong and other countries. It was in this conference where the plan to mark June 16, the date when the ILO adopted the convention, as the International Domestic Workers’ Day was first floated.

In December that year, ITUC, which then represented 176 million workers, launched a global campaign called “12 x 12”, with the goal of successfully pressurizing 12 governments to ratify the convention before the end of 2012. Partnering with ITUC in this campaign was the IDWN, the 2.6 million-strong IUF, the 20 million-strong Public Service international (PSI), 45 million-strong European Trade Union Confederation (ETUC), the Human Rights Watch, Anti-Slavery International and other organizations.

As soon as this campaign was launched, that very month, various activities such as demonstrations, awareness-raising about the convention, signature campaigns etc were held in African countries of South Africa, Guinea, Kenya, Benin and Ghana, and in Asian countries of Indonesia, India, Taiwan, Thailand and Hong Kong.

“Now, we face the biggest challenge ever – to convince all governments to ratify ILO Convention 189, so that our historical achievement in winning it is truly fulfilled,” Myrtle Witbooi, the chairperson of IDWN had said early in 2012, vowing, “We won’t rest until our task is done – the ratification of C189. May 2012 truly be the year of the domestic workers in the world.”

The same year, Venezuela, though not yet having ratified the convention, extended the 40-hour week, two weekly-offs, paid holidays and minimum wage to domestic workers. In Kenya, a court ruling brought domestic workers under the protection of labor law, and entitled them to national minimum wage and social security.

Two months later, in March, Argentina set 48 hours per week as the maximum working time of a domestic workers, beyond which overtime pay was made mandatory. Further, domestic workers were provided with entitlement for vacation days, sick leaves and maternity benefits. Brazil also passed an amendment to the constitution, which effectively entitled about 6.5 million domestic workers to overtime pay for every hour of work done beyond 44 hours per week, apart from unemployment insurance and pension.

Founding of IDWF and its victories

As steady progress by IDWN and its affiliates continued unabated, the ILO’s steering committee decided to transform the IDWN into a formal federation, and IDWF was formed at the founding Congress held from October 26 to October 28, 2013 in Uruguay with 47 domestic workers’ organizations across the world as its formal members.

In Costa Rica, campaigning for ratification had begun in December 2012, when a demonstration was held in front of the Congress. In solidarity with domestic workers, drivers of public transport plied their buses on the roads with billboards about the 12 x 12 campaign demanding their government to ratify the convention. After concerted efforts, the Costa Rican government ratified the convention two years later, in January 2014.

The left government of Bolivia was quicker to respond to the widespread campaigns which brought together domestic workers organized by FENATRAHOB (Federacion Nacional de Trabajadoras del Hogar de Bolivia) union. Activists set up stalls at parks and marketplaces in multiple cities simultaneously, distributed pamphlets and put up posters raising awareness and calling upon their government to ratify the convention. By mid-April in 2013, the country had ratified the convention.

However, despite successfully mobilizing to get 25 countries to ratify the convention, more than 150 countries – including the advanced western countries such as US, UK and France – are yet to ratify, and the IDWF and affiliated unions and organizations across the world have a long way to go before rights of domestic workers can be realized globally.

Nonetheless, even in those countries which have so far refused to heed the calls for ratification, significant advances have been made due to the strengthening and consolidation of domestic workers’ organizations in the process of the campaign.

In India for example – owing to the consistent pressure maintained by mobilizations led under the leadership of the IDWF-affiliated National Domestic Workers’ Federation (NDWF) – seven states had fixed minimum wages for domestic workers and a total of ten states had set up welfare boards for them by 2015.

At the second IDWF congress in November this year, the successes and the shortcomings of their struggle will be evaluated, best practices shared, and the journey over the long and winding road ahead strategized.