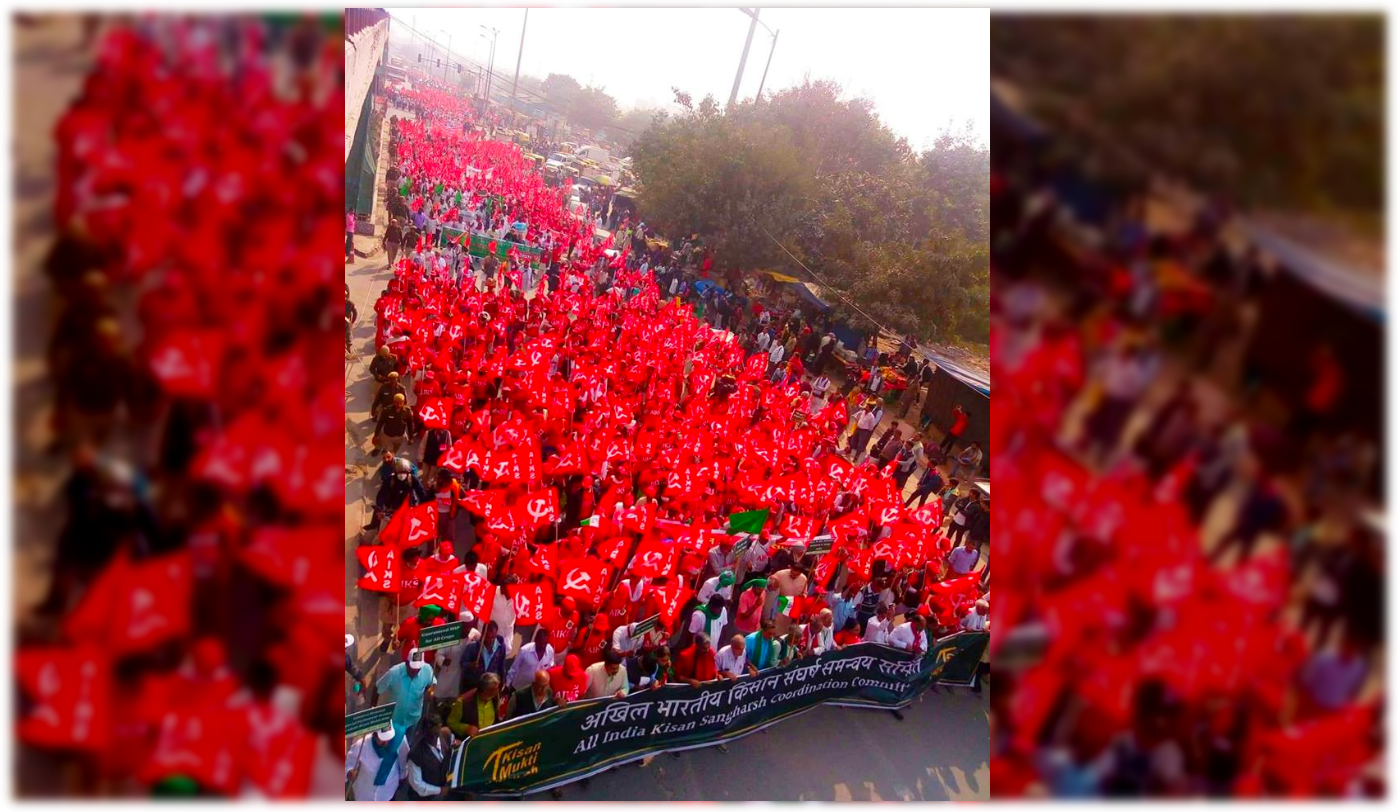 The farmers demanded a special session of parliament to discuss the agrarian crisis.

Around 50,000 small and medium scale farmers, landless farmers, peasant leaders and agricultural workers from across India took out the Kisan Mukti March (Farmers’ Liberation March) to parliament in India’s capital, Delhi, on November 29 and 30. The march was organized by the All India Kisan Sangharsh Coordination Committee (AIKSCC), an umbrella grouping of more than 200 farmers’ organizations and movements.

The march sought to highlight the country’s severe agrarian crisis that has pushed anywhere between 300,000 and 400,000 farmers to suicide since the mid-90s. The farmers have also called for a special 21-day session of parliament to discuss the crisis that has ravaged the country for more than two decades. Apart from these, the farmers have put forward immediate demands for a guaranteed minimum support price (MSP) for agricultural commodities and a comprehensive write-off of farm loans that are primarily responsible for farmers’ suicides. Two members of parliament have already tabled a private members’ bill to address these immediate demands.

According to P. Sainath, veteran journalist who has extensively covered the agrarian crisis and campaigned for the march, the term kisan or farmer is supposed to include even agricultural laborers and adivasi (indigenous) farmers who have been cultivating forest land for generations. This is more comprehensive than the government’s definition that includes only farmers who own land and are engaged in small scale production. This year, India witnessed some of the largest mobilizations of farmers since the 1980s.

The latest one began on the evening of November 27 when thousands of farmers belonging to various organizations from the key agrarian States of the country arrived in Delhi. From various locations, they marched to the Ram Lila ground on November 29, and from there, to parliament on November 30.

“I have seen way too many people succumb to pressure and commit suicide, but now is the time to take on the government and make our voices heard. That is why everybody is hitting the streets and fighting against capitalists,” said Kamdev Prashad, an 82-year-old farmer. “The government is biased. It is against farmers. On one hand, there are farmers like us who take loans in order to increase production and if we fail to repay it, because of the losses incurred, our houses are raided. On the other hand are the big corporates, who loot huge amounts of money and flee the country and nobody touches them”, he said.

“We are not here to beg, we are here for our rights”, was a slogan that was popular among the marching farmers. “Who created Hindustan (another name for India), the workers and farmers of India”, was another commonly heard refrain.

“I have travelled to Delhi along with my family because we want to raise our voices against the crisis we live through every day. I have to spend a lot of money on initial production. The prices of all commodities have fallen over the years. I don’t get the minimum support price for what I produce. How will I feed my children and send them to school?”, said Uma Devi, a  38-year-old woman peasant.

While the crisis began in the mid 90s, and has been aggravated by flawed agrarian policies by successive government at the centre, the current government of the far-right Bharatiya Janata Party, led by prime minister Narendra Modi, is a target of additional ire. This is because it came to power promising to address the crisis. “Nobody is bothered about us. The BJP government took votes from our village in the name of addressing farmers’ problems, but nobody turned up after elections,” Uma Devi added.

Many farmers also pointed out that the BJP manifestos for State elections currently underway did not have anything substantial on farmers’ issues.

Hannan Mollah, general secretary of All India Kisan Sabha, the largest constituent organization of the AIKSCC, while addressing farmers, declared, “The next election will revolve around the question of farmers, and not the question of temples and mosques.” He was referring to the BJP’s attempt to stoke religious tension, which has been a cornerstone of the right-wing party’s campaign for decades. This kind of polarization also seeks to distract the people from the dismal economic performance of the government.

The protests also saw the middle class and the urban population of Delhi expressing solidarity  with the farmers. Social activists, teachers and students from various universities in and around Delhi, artists and trade union leaders gathered under the banner of ‘Nation for Farmers’ and helped mobilize resources for the march. When asked about why those far removed from agriculture were coming out in support of the farmers, a student from Ambedkar University, Delhi, said, “Their labor feeds the nation. Even though we may not be even close to being as affected as they are, it still affects us all. We need to fight for their rights, because the nation depends on it.”

Even the media, which often ignores protests by the toiling masses, was forced to take note of the farmers. Hashtags such as #KisanMarch and #FarmersMarch were trending for two days on social media.

For Delhi, the seat of power which in recent times has seen a decline in massive movements of the oppressed, this year has been a revelation. A united rally of workers and peasants a couple of months ago saw 100,000 people take over the city. Another farmers’ march from the neighboring State of Uttar Pradesh last month ended in clashes with the police on the eastern border of Delhi, injuring several protesters. It remains to be seen how the government and the parliament will react to the loud and assertive voices of the thousands of farmers, right at their doorstep.