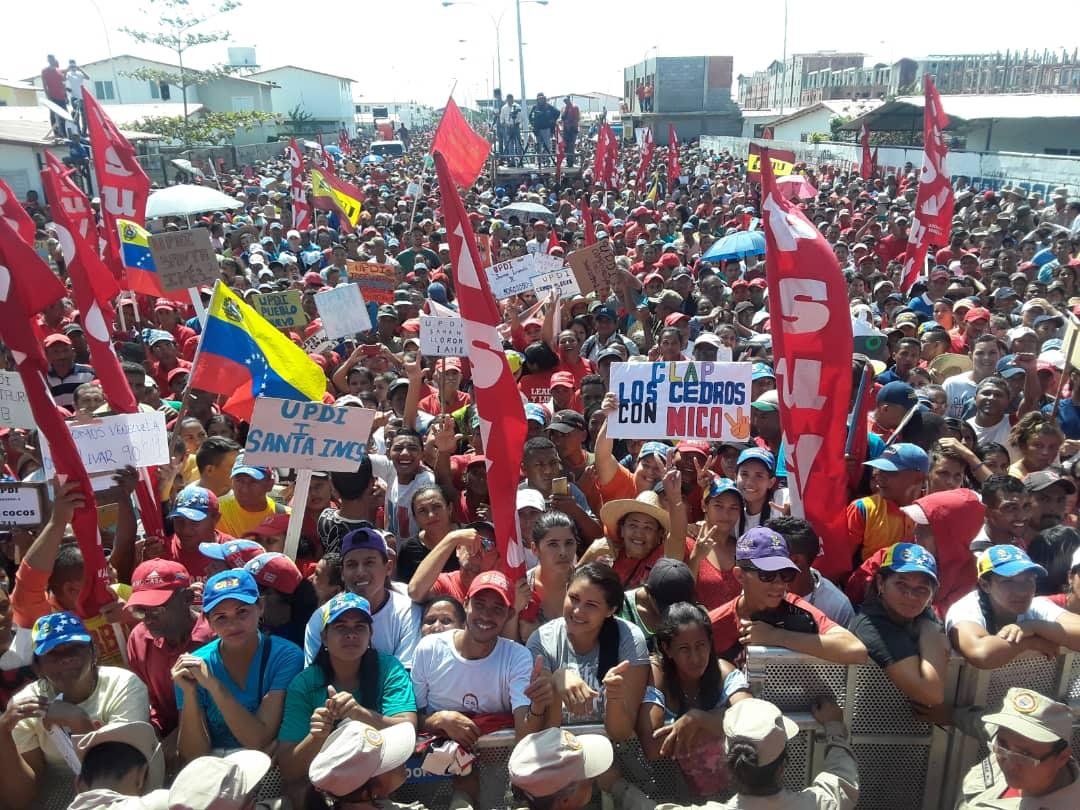 Rallies are being held across the country in support of the Bolivarian Revolution.

A week after member of the Venezuelan National Assembly president Juan Guaidó arbitrarily declared himself president of the country, the situation in the country remains critical. The United States government, which immediately backed Guaidó, has sought to increase pressure on the legitimate government of Nicolás Maduro by tightening the already brutal economic sanctions.

On January 29, the US announced it would block 7 billion dollars in assets of the Venezuelan state oil company, Petroleos De Venezuela SA (PDVSA), and 11 billion dollars of their export revenue. They will also freeze the assets of PDVSA’s US-based subsidiary Citgo.

When announcing the sanction, National Security Advisor John Bolton also flashed a sheet of his notebook to journalists where “5,000 troops to Colombia” was written. This potential threat of 5,000 troops to Colombia was later denied, but it’s clear that the move was meant to instill fear and remind Venezuela and its supporters that a military option is still on the table should they not respond to US demands.

The latest sanctions are possibly the toughest that have been applied on the Latin American country since the US began its campaign of sanctions under Barack Obama in 2015. The sanctions began when Obama declared Venezuela a threat to the national security of the US and have been steadily increasing in severity since then. The sanctions have not only caused millions of dollars in losses to Venezuela, but have starved and deprived the people of Venezuela by impeding the purchase of crucial products and goods like medicine and food and diminishing the available funds for social projects. The dire situation created by the sanctions is the same one that has forced thousands of Venezuelans to leave their country behind.

Since the elections held in May 2018 where President Nicolás Maduro beat his opponents by winning 68% of the votes, the sanctions and punitive measures have increased.

This sanctions were widely denounced within Venezuela and worldwide. The president of Bolivia, Evo Morales, wrote on Twitter “We condemn the decision of the Department of State to usurp the money of our brothers and sisters of Venezuela to hand it over to the coup-supporting right-wing obedient to their plans. With their economic blockade and threats of military intervention, the US attacks peace and regional stability.”

On Saturday January 26, US Secretary of State Mike Pompeo called for an extraordinary session of the UN Security Council in attempt to convince the council to “pick a side” and stand with the United States and recognize Juan Guaidó as President of Venezuela. However, his attempts to gain support for the coup diplomatically also failed. 19 of the 35 countries rejected Mike Pompeo’s remarks and refused to join the US in recognizing Guiadó and aso rejected the efforts of the US to encourage confrontation and violence in the Latin American country.

Vasili Nebenzia, the permanent representative of Russia to the UN responded to Pompeo’s demand by stating, “You are completely ignoring the sovereignty of Venezuela by imposing the decisions that are convenient to you and denying the people the right to solve their problems for themselves…We call on you to respect the legitimate power, to not intervene in internal issues of a sovereign country, to not impose on the Venezuelans’ decisions from the exterior. rather help them to resolve their problems in a peaceful way”.

Within Venezuela, Juan Guaidó and his illegitimate parallel government has also been making efforts to chip away at the stability in the country. On Tuesday January 22, the National Assembly of Venezuela, which has been in contempt of court since 2016 and whose actions are null, “passed” the Law of Amnesty and Constitutional Guarantees which offers guarantees to police, military and civilians that collaborate with the “restitution of democracy and constitutional order in Venezuela, violated by the de facto regime lead by the person who today is usurping the Presidency of the Republic”.

The law essentially calls for functionaries of the police and military to openly rebel against the democratically-elected government and ensures that they will receive amnesty. The National Bolivarian Armed Forces have been firm in their support of Nicolás Maduro and have announced their unconditional support to their democratically elected president on several occasions.