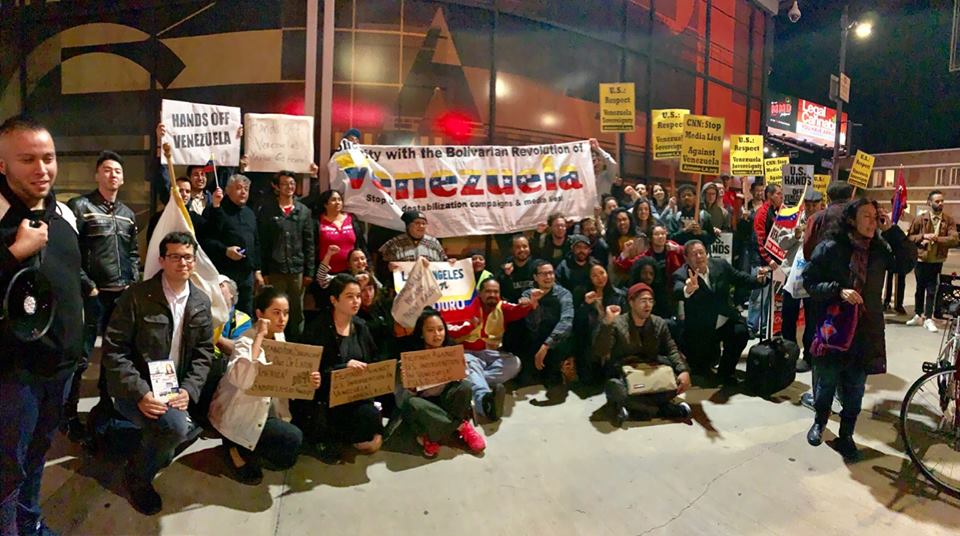 Bayan-Southern California, a member of the ILPS chapter in the US, marched in Los Angeles on January 26, calling for an end to US intervention in Venezuela.

Since its founding in May 25, 2001, the International League of Peoples’ Struggle or ILPS, an anti-imperialist alliance of people’s organizations around the world, has supported the Venezuelan people’s assertion of sovereignty against US imperialism. Consistent with its principle of fighting for “the cause of national liberation, democracy and social liberation against imperialism and all reaction,” its first concern, the ILPS has expressed support for the governments of both Hugo Chavez and Nicolas Maduro in Venezuela. It has consistently condemned the repeated attempts of US imperialism, under the successive presidencies of George W. Bush, Barack Obama and Donald Trump, to weaken and destroy the Venezuelan people’s struggle against imperialist dictates on their country and the world.

Thus, when Juan Guaido, head of Venezuela’s National Assembly, declared himself “interim president” of the country on January 23, the ILPS immediately condemned the move as part of a
US-led coup aimed at toppling Maduro’s democratically-elected government. Prof. Jose Maria Sison, ILPS chairperson, immediately released a statement branding Guaido as “merely the stooge of US imperialism and representative of the ultra-reactionaries of Venezuela.” He also accused the US government of wanting to control the immense oil reserves of the country.

He expressed confidence that the people of Venezuela, “especially the workers and other toilers, will continue to be inspired by Chavismo and to follow the courageous leadership of Maduro in defense of national sovereignty, democracy and peace.”

ILPS chapters in various global regions followed suit in releasing statements condemning the coup and expressing support for the Maduro government. The coalition’s Asia and the Pacific
chapter called on country chapters and member organizations to condemn the US-led coup in Venezuela. “Let us not allow Venezuela to stand alone against imperial designs. As democratic and peace- loving citizens of the world, we must unite and show our support for Venezuela. Let our collective voice for sovereignty and social justice be heard loud and wide, let our united stand against imperialism reverberate,” it said.

One of the first to respond to the Asia and the Pacific chapter’s call is the ILPS chapter in Indonesia. It released a statement calling on the Indonesian people and government to condemn
“US imperialist interference” in Venezuela and show “solidarity and support for the struggle of the Venezuelan people.”

Among ILPS chapters in advanced capitalist countries, the Canada chapter was one of the first to issue a statement and hold a protest action against the coup. It condemned the Justin Trudeau government for “mimicking the reactionary Trump administration” in declaring support for Guaido. ILPS-Canada also slammed the Trudeau government for imposing “targeted sanctions” on Venezuela and barring the Venezuelan ambassador from returning to Canada. It highlighted the fresh democratic mandate given to the Maduro government and various countries’ recognition.

In the Philippines, progressive groups from the broad umbrella organization Bagong Alyansang Makabayan (New Patriotic Alliance) or Bayan to the student mass organization League of
Filipino Students also immediately released statements on the issue. Bayan recalled the long history of US imperialist offensives against Venezuela under the leadership of Chavez and Maduro, blaming the US for the attempted assassination of Maduro last year. The LFS meanwhile condemned the US for “sabotaging Venezuela’s economic system, imposing sanctions, freezing the assets of Venezuela abroad, and intensifying US military intervention.”

With US-allied governments announcing their support for Guaido while Maduro and the people of Venezuela remain in control of the presidential palace Miraflores, the workers and people of the world will surely intensify efforts to condemn the US and support the Maduro government. And the ILPS will surely contribute to this global effort against US imperialism and for the sovereignty of the people of Venezuela and the world.