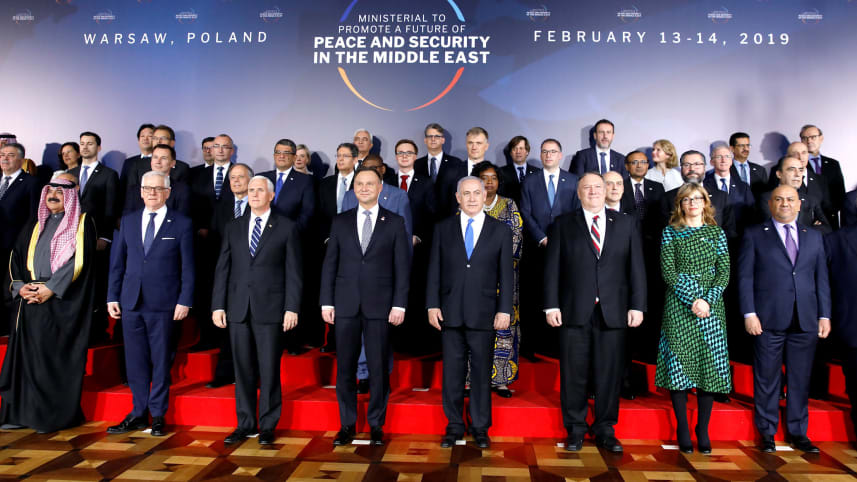 The summit to discuss conflicts in the middle east, was dominated by US call to reinforce its sanctions on Iran. (Photo: Kacper Pempel/Reuters)

A recently concluded summit in Warsaw, Poland, the Ministerial to Promote a Future of Peace and Security in the Middle East, made its intentions very clear when Mike Pence, the US vice president, urged the European Union (EU) countries in the summit to quit the Iran deal. Even though the United States (US) organized it as a ‘peace and security summit’ for the Middle East, in real sense, the summit was intended to mobilize international support for the fiercely aggressive US campaign against Iran. In the summit, US reiterated its vehement opposition to the Iran nuclear deal, and its plans to isolate Iran internationally, consequently laying the groundwork for a war with Iran.

Mike Pence called Iran the “leading state sponsor of terrorism” and accused the nation of aiming to establish a “corridor of influence” through Iraq, Syria, Lebanon and Yemen.

Pence further admonished US allies in the EU and North Atlantic Treaty Organization (NATO) for sticking to the terms of the 2015 Iran nuclear deal in order to maintain trade ties with Iran, following the lifting of the Iran nuclear program-related sanctions. EU members Germany, France and the United Kingdom (UK) launched a ‘special purpose vehicle’, a financial tool to help European companies to continue doing business with Iran without being subject to punishments under the re-introduced US sanctions against Iran. Pence characterized it as an “ill advised step that will only strengthen Iran, weaken the EU and create still more distance between Europe and the United States”. Complaining about European countries’ lack of cooperation with the US, Pence urged the “freedom loving nations” to take a stand against “Iranian evil”.

Even though the summit was advertised as a significant event, most countries did not send higher ranking officials as representatives. The only top level diplomat from Europe to attend the event was UK foreign minister, Jeremy Hunt. Germany, France and the EU did not send any representatives to attend the summit, as did Russia and China. Besides Iran, the summit was also supposed to discuss the war in Syria and Yemen, and the Israeli occupation of Palestine as well as its prospects for a peaceful resolution. But the Houthis, the Palestinians, and the Iranian and Syrian governments did not participate in the summit.

Along with Mike Pence, US secretary of state, Mike Pompeo, as well as special advisor and son-in-law of president Donald Trump, Jared Kushner, represented US in the summit. Apart from the the host country, the only other country which sent a top level delegation to the summit was Israel, represented by prime minister Benjamin Netanyahu. Netanyahu was reportedly delighted by the fact that Arab countries expressed no reservations against being seated side by side with Israel.

Netanyahu also tweeted about a joint Arab-Israeli plan for a war against Iran, saying, “What is important about this meeting, and it is not in secret … is that this is an open meeting with representatives of leading Arab countries, that are sitting down together with Israel, in order to advance the common interest of war with Iran.” Later, he replaced the word ‘war’ with a softer sounding ‘combating’.

It seemed that the Arab countries set aside the Palestinian cause in the summit. Palestinians called the summit an American conspiracy, saying that it lacked credibility as it aimed to normalize the Israeli occupation of Palestinian territories.

Nabil Shaath, adviser to Palestinian president Mahmoud Abbas, wrote in Haaretz that  “by fully siding with the Israeli government, (the Americans) have tried to normalize the Israeli occupation and the systematic denial of the Palestinian right to self-determination”.

US president, Donald Trump, withdrew from the 2015 Iran nuclear deal in May 2018, accusing Iran of attempting to make a nuclear bomb. This was denied by both his European allies as well as his own intelligence agencies, who said that Iran was, in fact, abiding by the terms of the deal.