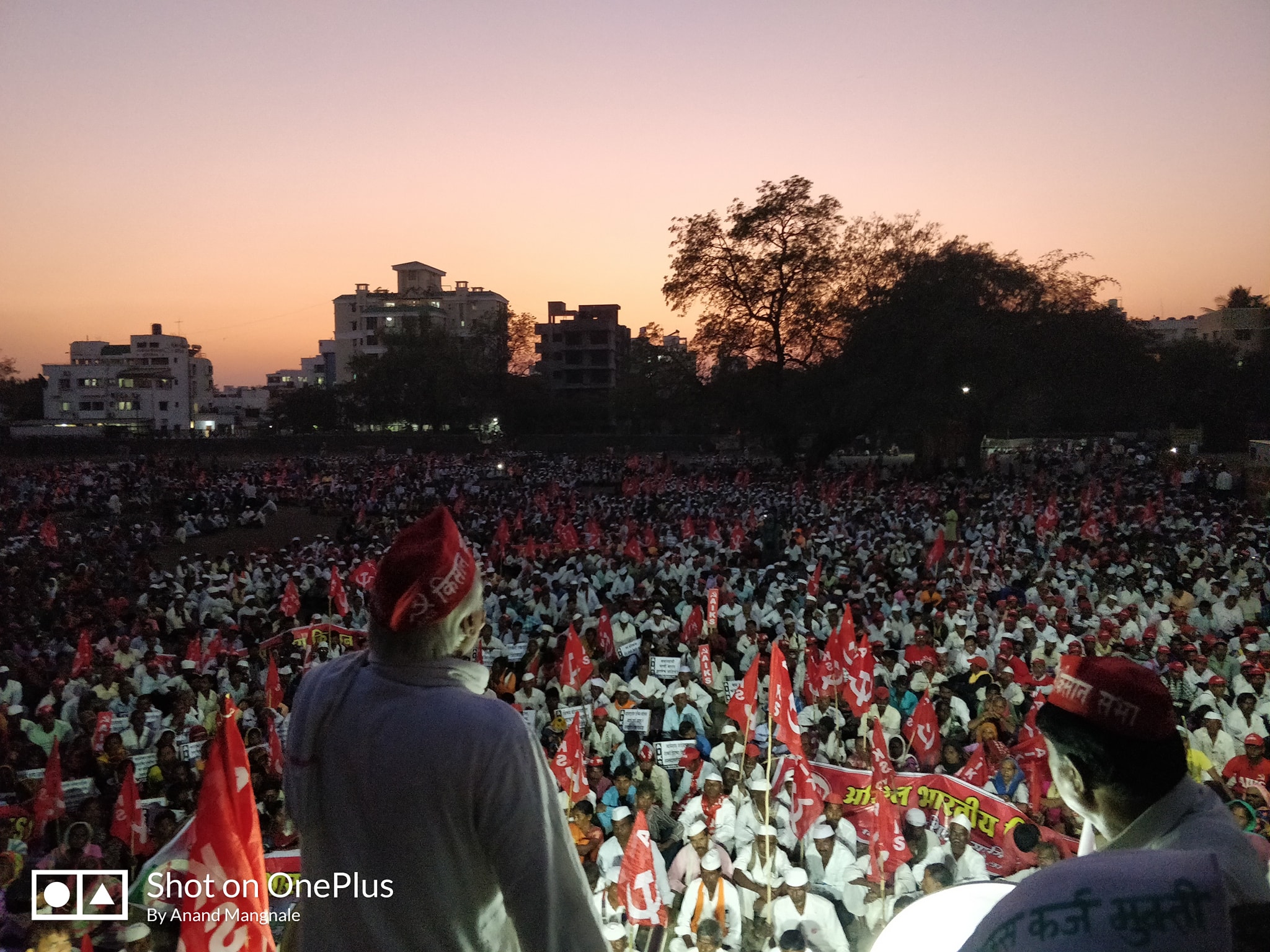 The farmers plan to march around 22 km a day and reach Mumbai on February 27. Photo: Anand Mangnale

Farmers in India’s State of Maharashtra have set out on another march, less than a year after the historic seven-day agitation that shook the conscience of the country. This is after the government failed to fulfill any of the promises made after last year’s protest. On Wednesday, despite police restrictions on a peaceful protest, the detention of a number of activists across districts and other attempts at stopping the agitation, thousands of farmers gathered at Nashik’s Mumbai Naka for their second historic long march. The farmers aim to reach Mumbai, the commercial capital of the country, on February 27, covering a distance of 180 kilometers — an average of 22 km per day.

The call for the Kisan Long March was given by the All India Kisan Sabha (AIKS), which is affiliated to the Communist Party of India (Marxist). Close to 80,000 farmers from 23 districts are participating in the march this time.

Navasu Devaji Thapad (68) has come from Jhap village of Palghar district. He is participating in the Kisan Long March for the first time. “Last year I was not well at the time of the march. But this year, we will win this battle for our land,” said Navasu.

However, a woman from the same region, 62-year- old Janaki Diva Nangare, who had participated in the march last year, was clearly angry. She asked, “Last year we walked for one week. This government told us that they will give us our land’s papers. But they cheated us. What shall we do? When will we eat rice from our own land?”

The farmers have resolved to take on the government. “This time, we will not call off this protest without getting our papers signed by forest officers,” said Pandit Gavali, standing next to Janaki.

The Kisan Long March has reignited the hopes, as well as fighting spirit in the minds and hearts of farmers. “The State government failed to keep its word. We believed the assurance given on the floor of the house last year. But what else are we left with?” asked Dr. Ajit Navale, state general secretary of AIKS. On February 15, Navale  was booked by the State police on charges of  unlawful assembly. On February 19, Over 200 farmers who were on their way to Nashik were taken into police custody.

Before resorting to repression, the State government, which is led by the far-right wing Bharatiya Janata Party, tried to postpone the march through two rounds of negotiations with the AIKS. In a meeting on February 17, chief minister Devendra Fadnavis tried to reassure the farmers that their concerns would be addressed. “But how would you believe their words? There should be concrete order by government. That is not happening in this case,” said Dr Navale. Both the Maharashtra State government and the central government of prime minister Narendra Modi face elections this year.

This time, the AIKS has issued a 15-point charter of demands. The major demands include clearing land titles of farmers on forest land, Rs 50,000 (USD 694) per acre compensation to drought affected farmers, and MSP (minimum support price) plus 50% rates to agricultural produce. Another demand is that the water running into the Arabian sea should be used for irrigation projects in Maharashtra and should not be diverted to the State of Gujarat.

In the first ever Kisan Long March in 2018, over 40,000 farmers from north Maharashtra had walked from March 6-12 to raise their demands.

As the farmers march seized the imagination of the country, the Maharashtra government was forced to accept all of their demands, with the chief minister giving an assurance on the floor of the legislative assembly. He also said that the farmers’ rights on forest agricultural lands would be cleared by May 1, 2018. But not a single demand has been fulfilled till date. The Kisan Long March was among the number of farmers’ protests in the country over the past few years as rural India seethes in anger against the Modi government. Discontent among farmers is said to be a major reason for the ruling BJP’s loss in State government elections in late 2018.  One of the States where the party lost – Rajasthan – had seen massive farmers’ mobilizations in 2018. In November 2018, tens of thousands of farmers marched to India’s capital New Delhi, demanding a special session of parliament to discuss the country’s agrarian crisis.

The farmers are resolved this time to wake up the government from its slumber and will not stop till their demands are met.