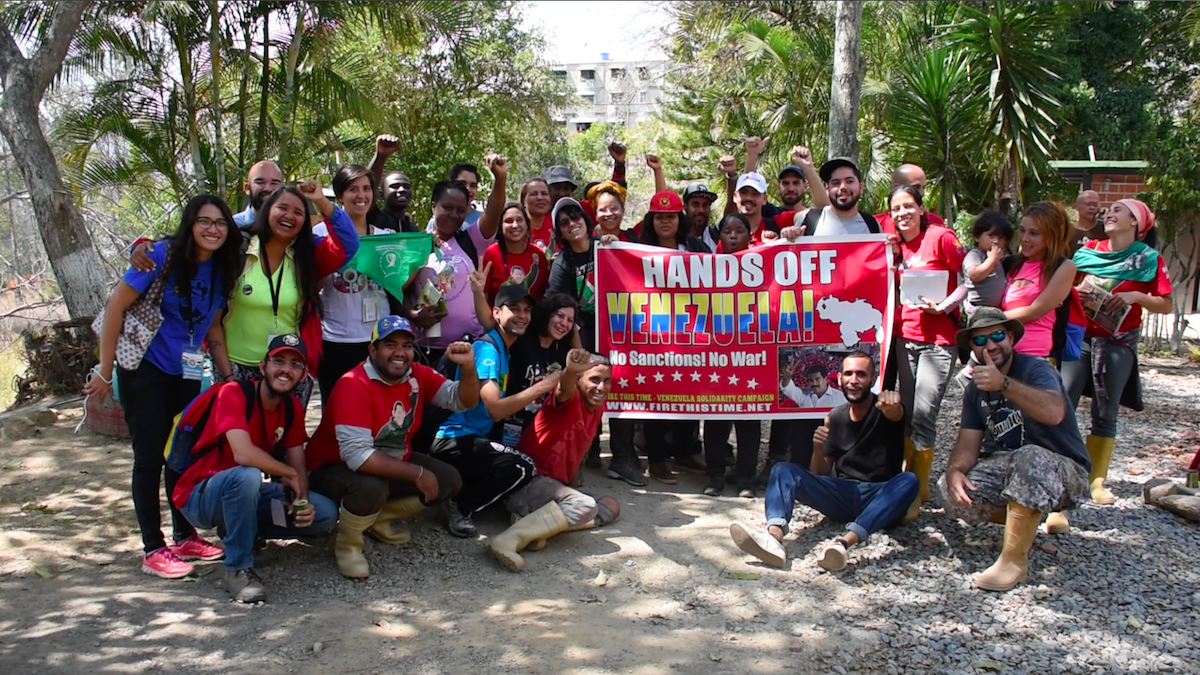 “We often talk about socialism in theory but we do not often see socialism in practice. [It is important] to see people working together to practically build socialism. That is why being in Venezuela is so important.” These words by a member of the Che Guevara Internationalist Youth Brigade summed up the experience of its members from across the world as they stayed and worked with Venezuelans in the midst of building projects that strengthen people’s power.

The Youth Brigade is in the country ahead of a global meeting in solidarity with Venezuela and the Bolivarian Revolution. It is comprised of nearly 150 youth from 40 countries who were split up into seven teams and went to various locations on February 19.

At the Caricuao Ecological Center in Caracas, these youth from around the world experienced first-hand a vision of food and growth that is organic and sustainable. This ecological center is dedicated to the training, research, political education and agro-ecological production, and according to Belén Artiaga of the Francisco de Miranda Front, “It seeks to create a change of mentality in cities and allows us to train people, militants, and break with the capitalist logic of seeing food as a commodity. We produce food because it is a source of life, not to speculate … most of the people do not produce their food, they are dependent and that can be changed with experiences like this.” For Azzaa Rojbi, a Canadian journalist of Fire This Time, who was preparing the soil for planting vegetables, the center was an example of a community confronting difficult times with creativity and looking for good solutions. “It is very interesting to be here because what the press says is very negative, and to be here working with people, in their community allows us to see the truth,” she added.

Working beside her, Elizabet, a Venezuelan militant of the Francisco de Miranda Front, felt that .sharing experiences with young people from other countries was a beautiful dynamic because “We learn from their realities and experiences and they see our reality, which is productive. We are proud to have them here.” The sentiment was echoed by Belén, who said that these young people from across the world could, “help break the siege of lies that the hegemonic media spreads about Venezuela.”

The project is just five months old but those working on it are confident. “We resist the attacks of the biggest empire and its lackeys, then, who can speak of defeat? It is not about just victory; we are building utopia, we are consolidating the future,” said Ruben Machado.

Another team visited the Campamento de Pobladores (Camp of the Urban Dwellers) in Amatina. The project is a unique example of how participatory democracy and collective effort take shape in the most basic of everyday needs – housing. The community runs on the ideas of self-management, collective property, the urban revolution and socialism.  The property on which the project is built was expropriated from the Polar Group in 2010. With the aid and encouragement of president Hugo Chavez, the people built apartment complexes through collective effort, brick by brick, soon adding a bakery and a garden to the complex. A pre-school and radio station are also planned. The members of the Youth Brigade, who stayed with the families of the project, enthusiastically pitched in with the ongoing construction work, tending the garden and work in the bakery. In the evening, as the residents prepared for a meeting, some of the members found their skills in football tested by the children who have grown up in the project, confident of a secure roof over their heads.

The community meeting in the evening was many things – a space for remembrance, a space for reflection, and space for ordinary Venezuelans to tell the world what they thought about the reality of life in their country. The residents at the meeting talked about the collective administration of the space and their experiences in building their own homes but also about their deep anger at the United States and other countries, which are aiming to destabilize their homeland and destroy the peace they have worked so hard to build. A 26-year-old resident recalled how years ago, her family had been persecuted for their political beliefs, leading to the death of her uncle. For her, the establishment of the Fifth Republic under Hugo Chavez marked a beginning of a period of safety and security. The ongoing economic blockade had hurt in a number of ways, she pointed out. In addition to the economic difficulties, there was also the psychological impact on youth, who were constantly being told that Venezuela was behind on material goods and luxuries. “But from the experiences of my own friends who have lived abroad, I have come to know that those societies do not ensure happiness despite the availability of all these material goods” Nevertheless, the youth are even more determined today, she said. “One thing we have learned from this crisis is the need to be involved in production itself, in the productive sectors. We youth can no longer be merely involved in artistic and creative activities. We must produce, we must create.”

Reny Paruta, one of the community leaders of the Campamento de Pobladores, said, “Through a process of self-management, we built an organization. And through this process, we are not just building homes but a community of love and hope for the future. “

“The tools here are owned by the community and they work together and produce together, and this is what people need right now. So it is very nice to be here,” said Zuzan Crystalia Griapon of the Papua Student Alliance.

For the members of the brigade, these transformative projects were a window into a different way of life and reaffirmation of the inspiring ability of people’s power to radically change everyday life and the world as a whole.