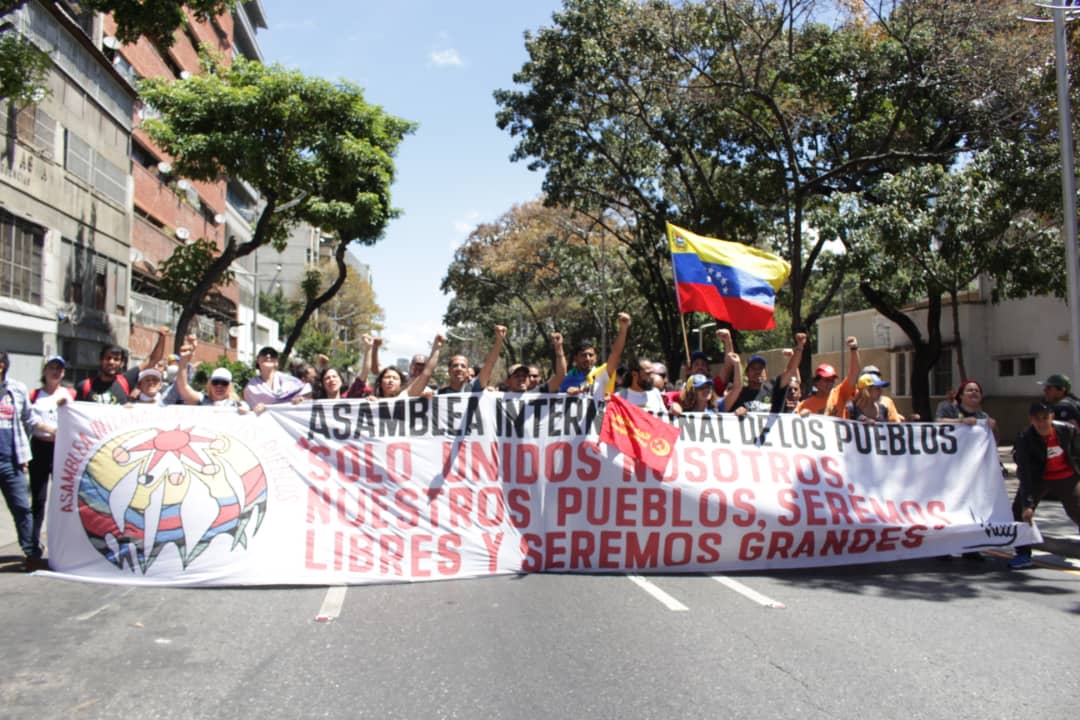 Members of the Che Guevara Internationalist Brigade march on the streets of Caracas against imperialism and in defense of the sovereignty of Venezuela on February 23.

The nearly 200 members of the ‘Che Guevara’ Internationalist Brigade in Solidarity with the Bolivarian Revolution concluded their experience of six days participating in volunteer work, dialogues and discussions in neighborhoods, factories, agro-ecology schools, community centers and agricultural projects in different areas of Venezuela. The experience not only allowed for the international members of the brigade to get to know the reality in Venezuela, but also facilitated exchange between the members about their organizations, struggles, and cultures.

One of the organizers of the brigade, Silvana Broggi of People’s Movement Patria Grande of Argentina commented that, “For us, to live the daily reality of the Venezuelan people was fantastic, because we have so much admiration for them and we are always surprised by the organizational capacity, of their love, of their sacrifice for the revolution, but above all for their conviction. Here, the people have a conviction to resist and to defend the revolutionary process. We feel committed to bring this message back to our countries. We have fulfilled our objective to be transformed as human beings, as Che told us.”

The internationalist brigade began its activities in Caracas, where the members visited different emblematic locations across the city such as the Cuartel de la Montaña, the historic-military museum dedicated to honoring the legacy of Commander Hugo Chávez, the National Pantheon of Venezuela where the tomb of Simón Bolívar as well as those of other national heroes are located. They also participated in forums and discussions at the Bolivarian University of Venezuela, a university established by Hugo Chávez in 2003.

On Tuesday February 19, the brigade divided into seven groups where they visited different movements and communities building people’s power and engaging in transformative projects. In all of the seven different experiences, the youth participated in volunteer work such as planting the fields, painting murals, working on restoration projects, among other tasks.

One of the sites visited was the Socialist Maizal Commune, which is home to seven thousand people who are organized in 21 Communal Councils. José Guzmán Tato of the Left Cultural Front and Youth of ALBA Movements, helped organize the visit of the brigade to the socialist commune.

He said that the central objectives of the visit were to show that “socialism is possible and through an instrument that we have been practicing in Venezuela part of the legacy of Commander Chávez, which is the commune. So recognizing the commune is the first objective. Another objective is to be able to share, interact and unite the working class of the world and connect our interests, recognize ourselves as united in our diversity…The Che Guevara Internationalist Brigade in Solidarity with the Bolivarian Revolution, is a youth space based on grassroots work with feminist, anti-patriarchal, youth, socialist and Chavista principles, with perspectives of transformation for a better world that is possible.”

Tato also commented that the brigade members participated in assemblies with the political forces of the commune and that together they reflected on what a socialist commune means, and about the experience of the Maizal commune specifically.

Kandis Sebro of the Oilfield Workers’ Trade Union (OWTU) of Trinidad and Tobago visited the city of Valencia, in the Carabobo state, home to Venavidrio which is a glass company that was nationalized and is now under complete worker control. They also visited a worker-run paper factory.

Sebro reflected that “coming from OWTU, where we just went through a struggle and where we are now in a position where workers will possibly be in control of the company, it was very interesting for me to see how there was a shift in the structure of the company from the autocratic system, the top down management, to a more holistic management of the company, where you had workers moving from a system where they had machinery and a lot of resources, to only their bare hands and minimal machinery and finding ways to maintain equality and still provide the basic needs of the community. Also, how they were able to be creative and find other ways to self-sustain. We visited the company Venavidrio where they still maintain all the machinery, etc. and they are actually quite competitive. Due to current situation here in Venezuela, they have found alternative ways in terms of developing the business itself and found outlets to export to, which could potentially double their income to the company itself, and that too was quite impressive.”

The message which seemed to be resonate with all members of the brigade was that the experience affirmed their commitment to defend the Bolivarian Revolution and bring the message to their organizations and countries that the Bolivarian Revolution is a revolution full of peace, respect, innovation, perseverance and dignity. This commitment is especially important in the current context faced in Venezuela where the US is leading an imperialist assault against the sovereign country and the threat of military intervention is impending.

She also responded to the comments made by the US and its allies that Nicolás Maduro is a brutal dictator: “As an Argentine I have something to say about this. As Latin Americans, as Argentinians, we know what a dictatorship is, a dictatorship means 30,000 disappeared comrades by a dictatorial, murderous, and genocidal regime. And thanks to our struggle, we have begun to condemn it. This is not a dictatorship, don’t get it wrong. Here there is democracy, freedom of a people who are determined to decide their destiny. So we are going with even more conviction that we have to defend and accompany these people.”