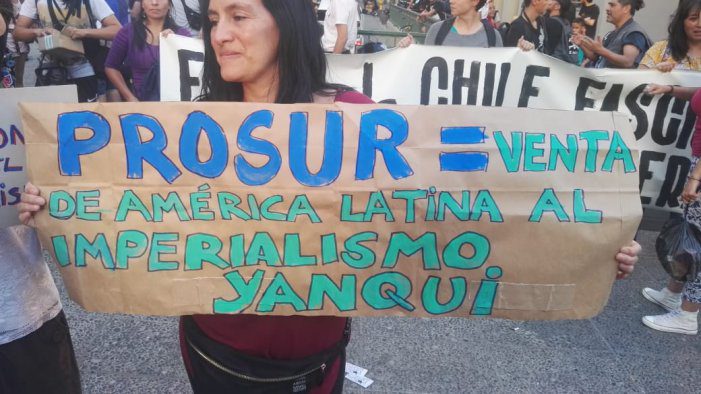 On March 22, presidents of seven and representatives of four Latin American countries met at the La Moneda Palace, the State government office in Santiago, Chile, to attend the Summit of Presidents of South America, a meeting aimed at setting up the Progress and Development of South America (PROSUR).

The presidents of Argentina, Mauricio Macri; Brazil, Jair Bolsonaro; Chile, Sebastián Piñera, Colombia, Iván Duque; Ecuador, Lenín Moreno; Paraguay, Mario Abdo Benítez, and Peru, Martín Vizcarra; and the ambassador of Guyana to Chile, George Talbot, signed the declaration of Santiago “for the renewal and strengthening of the integration of South America”, launching the forum for the PROSUR. The summit was attended by the representatives of Bolivia, Uruguay and Surinam as observers. It is reported that the host country of the summit, Chile, will hold the pro-tempore presidency of the PROSUR for the next 12 months, followed by Paraguay.

UNASUR was born in May 2008 under the leadership of Commander Hugo Chávez, at the Third Summit of Heads of State, in Brasilia, Brazil, one of several projects of regional integration spearheaded by him. The goal of UNASUR is to build integration in the cultural, economic, social and political areas while respecting the current situation of each of the member nations. The secretariat headquarters is in Quito, Ecuador.

Suspicions have already arisen with regards to the true intentions behind the creation of PROSUR as it already seems to promote the interventionist line that has been promoted from the White House and encouraged in the past months by the right-wing governments of the region.

All the presidents of the region were invited to the meeting, with the exception of Venezuela’s Nicolás Maduro, because according to the founders, the current Venezuelan government does not fulfill the requirements to participate in it. Furthermore, the summit sought the participation of the “self-proclaimed” interim president of Venezuela, Juan Guaidó (who did not attend the meeting), making evident its ideology that seeks to deepen the differences among the South American countries.

The summit, the forum and the participating heads of the neoliberal states have been criticized by the social and popular sectors of Chile. The creation of the platform provoked a series of anti-PROSUR, anti-imperialist and anti-government demonstrations in Chile. On March 22, the day of the summit, a demonstration “against the fascists of PROSUR” was staged in the center of the capital by various social, political and student leaders. It was brutally repressed by the national police. Several people were injured and many were arrested. Dauno Tótoro, leader of the Revolutionary Workers Party, was one of the detainees.

A day after the founding summit, on March 23, members of several social movements and organizations of Chile once again mobilized in the country’s capital Santiago, against the intervention of the United States in Latin America and in solidarity with the people and government of Venezuela. The protest was joined by the members of the Coordinating Assembly of Secondary Students (ACES), the No + AFP Movement, the National Federation of Settlers (FENAPO) and the 8M Coordinator, as well as by the representatives of the Youth of the United Socialist Party of Venezuela (JPSUV).

On March 24, a concert “For the right to live in peace”, in solidarity with Venezuela and against the US intervention, was organized by a number of cultural movements, social movements and political parties. It was attended by several national and international artists and by hundreds of people. During the concert, the protesters once again condemned president Piñera’s decision to host the summit and be part of the PROSUR.

The formation of PROSUR creates a greater crisis of international institutionality in the region and poses a greater threat to regional peace and intensifies the isolation of Bolivarian Venezuela. However, the people’s movements and organizations across the continent continue to resist attempts by their governments to submit their countries under the imperialist reign and continue to fight for a free and sovereign Latin America.