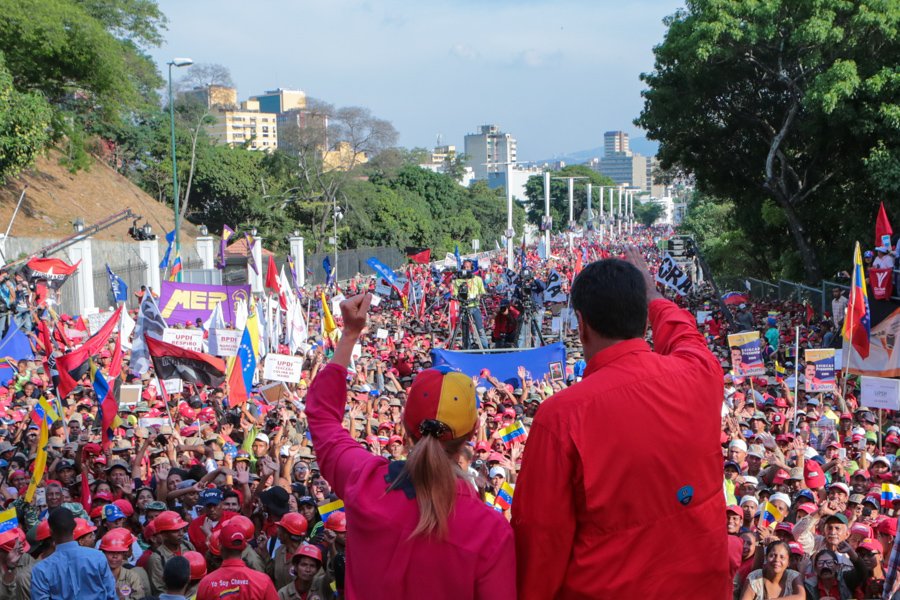 Nicolás Maduro salutes the masses on May 1. Photo: Twitter

Tens of thousands of Venezuelans marched on May 1 to commemorate International Workers’ Day and to denounce the latest attempt by the imperialist forces and the Venezuelan right-wing to overthrow the democratically elected government of Nicolás Maduro. Their massive mobilization sent a clear message that any attack on the sovereignty and peace of Bolivarian Venezuela and its civic-military union and the organization of the working class will be defeated.

The failed coup took place on April 30 when right-wing opposition leaders Juan Guaidó and Leopoldo López called on members of the National Bolivarian Armed Forces to mobilize at the La Carlota airbase to overthrow the government of Nicolás Maduro. The call was made in a Twitter video in which they claimed that they had occupied the air base and were supported by a large faction of the armed forces. They called it the final phase of “Operation Liberty”.

Shortly after the video was published, Madelin García a journalist from Telesur reported live from the air base, showing that there was no occupation of the air base and that the mobilization of right-wing forces was occurring on the Altamira distributor highway near the base.

Throughout the day, reports surfaced that the soldiers who had been accompanying Guaidó and López had been tricked into going there. A soldier speaking to Telesur said that they were told to prepare their patriotic uniforms and that they would receive a special decoration and “news that would change their life”. He explained that they were told to come to Altamira with their weapons under false pretenses and that when they arrived, were given armbands and ordered to block the highway and told it was a coup d’état. He and other soldiers were able to escape one by one with help from their General. He denounced that “this is another sabotage by the coup-supporting right-wing that wants us to fight between ourselves”.

The liberation of Leopoldo López was also a noteworthy event on the chaotic day. López was arrested in 2014 for his prominent role in the weeks of violent protests that year referred to as “The Exit” which caused 43 deaths and 600 injuries. He was convicted of public instigation, property damage, arson and conspiracy. In 2017, he was remanded to house arrest. After their failed action, López fled to the Chilean Embassy and it was later confirmed that he was taken to the residence of the Spanish ambassador in Caracas.

The coup attempt was widely rejected and denounced by Venezuelan authorities, as well as by political leaders from across the world. Evo Morales wrote on Twitter: “We energetically condemn the attempted coup d’état in Venezuela, by the right-wing that is obedient to foreign interests. We are sure that the valiant Bolivarian Revolution lead by my brother Nicolás Maduro, will defeat this new attack from the empire”.

In response to the threats to its integrity and sovereignty, leaders in Venezuela called on the people to mobilize at the Miraflores Palace to declare their loyalty and support for the Bolivarian Revolution and its elected leader Nicolás Maduro. The plaza was full within hours and the chants of “Yankees get out of Venezuela” reverberated.

During the tense day, the international right-wing was quick to applaud and express their support for Guaidó and López. US leaders like Senator Marco Rubio and vice-president Mike Pence who have been central in promoting US sanctions against Venezuela, supported the coup attempt. Mike Pence posted “To @jguaido, the National Assembly and all the freedom-loving people of Venezuela who are taking to the streets today in #operacionlibertad—Estamos con ustedes! We are with you! America will stand with you until freedom & democracy are restored. Vayan con dios! #FreeVenezuela.”

By the end of the day, by combating the spread of false information, neutralizing the soldiers who had defected and supported Guaidó with as little force as possible, and mobilizing the population in support of Maduro, Bolivarian Venezuela was once again victorious against imperialist aggression.

The Corriente Revolucionaria Bolívar y Zamora, a Venezuelan social movement, released a statement following the failed coup “The Chavista leadership should be on the side of the people in each battle, not only in the specific battles with the enemy, but in the daily battles of this people to resist the aggression and impact of the economic crisis. The loyalty of the Chavista people is shown in every moment and it is the central pillar of the important victories that we have won. The leadership that we need is an issue that should be debated in the midst of this complex battle in order to advance not only in the victory before the enemy but in the new beginning that President Maduro has called for.”

Though this latest imperialist aggression has been successfully defeated, Venezuelans know that the struggle to defend their sovereignty and peace from attacks is not over. The Southern Command of the US Army posted an ominous message on Twitter on May 1 after the coup had definitely been defeated: “#SOUTHCOM is monitoring the situation in #Venezuela & remains prepared to support all options when requested by senior leadership. We are working w/ partners in the region, & are in full support of the diplomatic effort for a peaceful, democratic transition of power in Venezuela.” Major figures in the US establishment also made belligerent statements after the failure of the coup.

President Maduro summoned the people of Venezuela to participate in a summit for dialogue this coming weekend, May 4-5, to elaborate a Plan of Change and Rectification of the Revolution, “We will not let up, whether there is rain, thunder or lightning, we will make the big changes that the Revolution needs,” he declared.

How has the US changed since 9/11?
RECENT ARTICLES