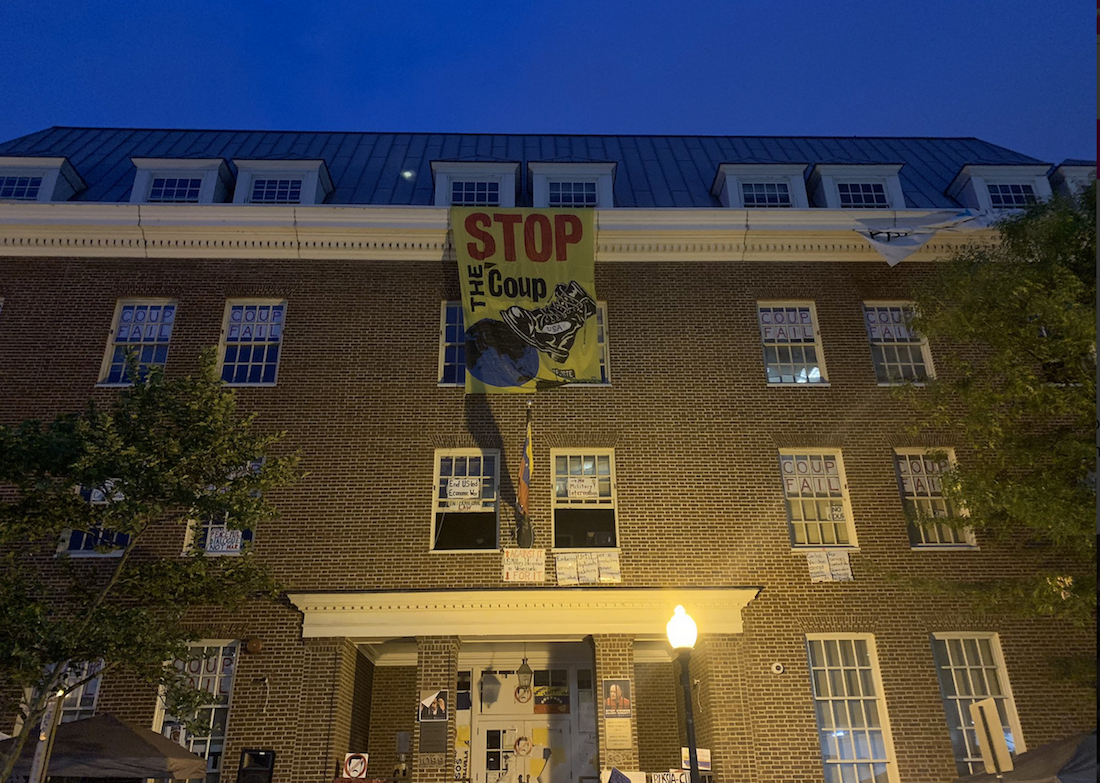 Power has been cut at the Venezuelan embassy in Washington D.C. Photo: CODEPINK

On the night of May 8, members of the Embassy Protection Collective reported that the authorities had cut the power supply to the Venezuelan Embassy in the US capital, Washington D.C. The collective has been protecting the Venezuelan embassy from a potentially violent take over by supporters of the right-wing self-proclaimed interim president Juan Guaidó since April 15. Activists inside the embassy declared that they were prepared for the latest move and have reaffirmed their will to remain and protect the building.

The Embassy Protection Collective is composed of pro-peace and anti-intervention activists from CODEPINK, the Answer Coalition, Black Alliance for Peace, PopularResistance.org and Veterans for Peace. Several journalists from alternative and left media outlets are also participating. The Venezuelan embassy staff were forced to leave the country on April 24 but entrusted the collective with maintaining the integrity of the building until a political solution was reached on the breakdown of diplomatic relations between the constitutional government of Venezuela and the US. Many fear that the occupation of the embassy by opposition forces could escalate the already tense situation and be the detonating factor for a US invasion of Venezuela.

The opposition that has been protesting outside the embassy scaled up its attacks after Juan Guaidó attempted to incite a military uprising against Nicolás Maduro’s democratically-elected government on April 30. Since then, Venezuelan opposition forces have been engaged in an intense campaign of harassment, blockade, threats, and violence against the collective in order to force them to leave the premises.

Currently, all entrances to the embassy are blocked and opposition protesters are not allowing activists to enter, blocking supplies of medicine and food. Their blockade is protected by the DC Police and the US secret service. Videos show that right-wing protesters have been using bullhorns, air-horns, and clanging pot and pans to generate constant loud noise and have also used high intensity laser, strobe and flash lights for visual disturbance.

Protection collective members have also reported that the opposition protesters hurl racist, sexist and homophobic insults, taunts and threats at them. Many such incidents have been recorded and posted on Twitter. There have also been incidents of physical and even sexual assault against the collective members by the right-wing protesters. The police and secret service personnel, despite being present in large numbers, have refused to intervene.

On the other hand, several members of the protection collective have been violently arrested by the DC police and Secret Service while attempting to provide food to those inside the embassy. On May 2, Ariel Gold of CODEPINK was tackled by a Guaidó supporter and arrested as she attempted to throw loaves of bread on to the balcony of the embassy. She was charged with “throwing missiles”. On May 8, 72 year-old Gerry Condone, a Vietnam War veteran and president of Veterans For Peace, was tackled to the ground by Secret Service officers after trying to throw cucumbers into the embassy.

BREAKING: Police violently arrest the president of @VFPNational, Jerry Condone, for trying to get food into the embassy. He is left with lacerations on his face. @UrsulaRozum also arrested. Opposition walks away with stolen food. pic.twitter.com/KhPvSAtC05

Maurice Martin, another member of Veterans For Peace, was also arrested and charged with “throwing missiles”, resisting arrest and assaulting a police officer.

Beyond the obvious political bias shown by members of US law enforcement by protecting the Venezuelan opposition and outrightly assaulting the Embassy Protection Collective members, they are also in violation of international law. Article 22 of the Vienna Convention states that host countries are required by international law to protect foreign embassies against any “intrusion, disturbance of the peace or impairment of its dignity.” It also stipulates that a takeover of the embassy of a sovereign nation whose government holds power and is recognized by the United Nations would be illegal. The Embassy Protection Collective has condemned the fact that despite these legal norms, the US authorities have done nothing to protect the Embassy.

The right-wing attack on the embassy is under the leadership and coordination of Carlos Vecchio who was appointed by Guaidó as his ‘chargé d’affaires’ in the US. He was recognized by the Trump administration shortly after. Vecchio has appeared alongside the violent right-wing protesters at the embassy several times and has repeatedly called the collective members “invaders” and said they would be taken out soon.

Vecchio has been a central player of Venezuela’s right-wing opposition for the past several years. He helped found the political party, People’s Will (Voluntad Popular), with Leopoldo López (another prominent opposition leader who accompanied Guaidó on April 30 during the attempted military uprising). López is now hiding out in the Spanish Embassy in Caracas in violation of his house arrest. Vecchio left Venezuela in 2014 after he faced charges for participation in the violent opposition protests, and settled in Miami to help coordinate efforts from abroad against Maduro’s government.

Vecchio has close relationship with conservative US political leaders like former Florida Governor and incumbent Senator Rick Scott and Senator Marco Rubio, who is behind much of the US policy against Venezuela. Rubio commented on Vecchio’s new post, “He’s been there less than a week but the one thing that’s valuable about having him here is it gives us an on-the-ground, direct liaison to the interim president and to the National Assembly who can report back in detail what it is we’re working on…It’s valuable to have him here.”

After the electricity was cut at the embassy, Vecchio posted on Twitter: “To the invaders of our Embassy that comfortably defend the regime of the usurper, we have decided to give you a little bit of the experience of living in Venezuela under the failed socialism of Maduro. As of this moment you will not have electricity. Next step: your exit”.

Members of the Embassy Protection Collective have called on all peace-loving, anti-interventionists to rally in support of their efforts outside of the Venezuelan Embassy in Washington D.C. and call on the US government to respect the Vienna Convention. Some fear that a violent eviction is near.