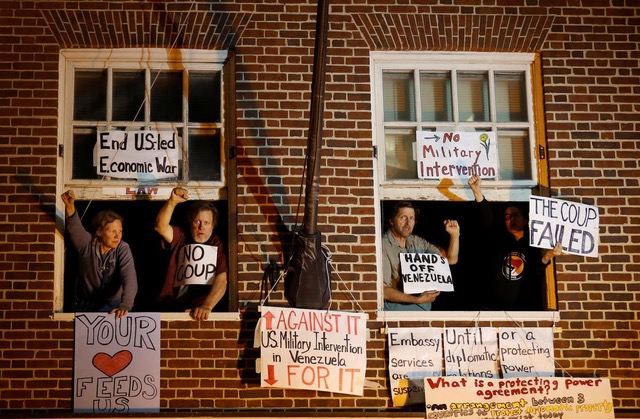 On May 13, US law enforcement authorities initiated the forcible eviction of the activists from the Embassy Protection Collective residing in the Venezuelan embassy in Washington D.C. Police from the District of Columbia and agents of the US Secret Service surrounded the embassy before removing the chains locking the embassy doors, breaking into the building and serving the activists with the eviction notice. A US State Department official said that Carlos Vecchio, the Venezuelan ambassador appointed by US-recognized interim president Juan Guaidó, had requested assistance from US in this matter.

President Nicolas Maduro’s government has decried the eviction of the activists. Venezuela’s vice minister of Foreign Affairs for North America, Carlos Ron, tweeted, “The Government of the Bolivarian Republic of Venezuela has not authorized the entry of police officers into the former Embassy building in Washington, DC. This intrusion is yet another violation of international law by US authorities and an aggression against Venezuela.” The Embassy Protection Collective is comprised of a number of individuals and groups who support Maduro’s elected government. Its members have been residing and working in the embassy since the second week of April. Medea Benjamin from Code Pink, one of the organizations leading the collective, stated that diplomats from Maduro’s government had granted them access to the embassy before leaving. The activists moved into the building, fearing that Guaidó’s supporters would illegitimately take control of the embassy in the aftermath of Guaidó’s failed coup attempt on April 30. Since taking residence, the collective has been maintaining the building on behalf of Venezuela’s elected government until a permanent protectorate for the embassy is established.

In response to the collective’s occupation of the embassy, US State Department had reiterated its support for Guaidó’s government and recognized its legal authority over the embassy. Guaidó supporters have been demonstrating in front of the embassy, blocking its entrance and obstructing delivery of food and medicine to the residents of the embassy. Right-wing pro-Guaidó groups have also been violently harassing and attacking individuals outside the embassy who gather there to protest US intervention in Venezuela. On the night of May 8, members of the collective reported that the authorities cut the power supply to the embassy, a move which they had expected.

Forcible eviction of pro-Maduro activists also comes on the heels of Guaidó asking for strategic and operational assistance from the US military to destabilize Maduro’s government. In a letter to the head of US Southern Command, Vecchio requested US military intervention in order to “restore democracy”. For months now, US has been considering military intervention in Venezuela in Guaidó’s favor, a prospect that the latter has welcomed in his bid to oust Maduro.