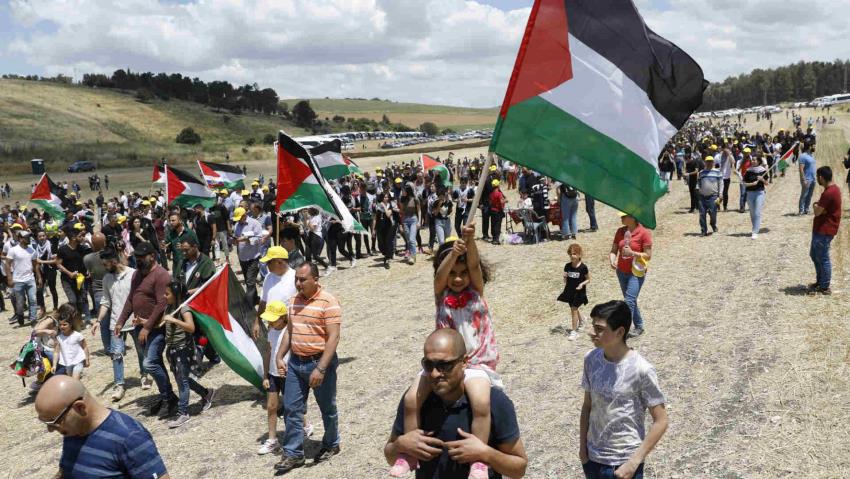 Palestinians are holding massive protests throughout the occupied West Bank, starting Monday, against the US-backed economic summit in Manama, Bahrain. The two-day summit, which is set to begin on June 25, will see the US introducing the economic component of what the Trump administration calls the ‘deal of the century’. Protests were already held last week in Morocco and Jordan against the Bahrain economic conference.

The Palestinian Fatah movement announced rallies and protests in several Palestinian cities against the summit. In Ramallah, a rally was scheduled for Monday at the Manara square in the town center. A series of protests – the ‘days of escalation against the occupation’ – will also be held on Tuesday and Wednesday.

At the same time, three major Palestinian political parties, Fatah, Hamas, and PFLP (Popular Front for the Liberation of Palestine), will take part in an alternative summit in the Lebanese capital of Beirut. The Beirut summit is meant to be a protest against the Arab countries participating in the Bahrain conference, and aims to demonstrate Palestinian unity and sovereignty.

Certain details of the economic component of the ‘deal of the century’ were revealed on June 22. As per the plan, a USD 50 billion global investment fund will be created, supposedly to improve the economies of Palestine (namely the occupied Palestinian territories of West Bank and Gaza), Egypt, Lebanon and Jordan. USD 28 billion will be earmarked for the West Bank and Gaza, USD 9 billion for Egypt, USD 6 billion for Lebanon and USD 7.5 billion for Jordan. Most of this money will come from donor nations and investors, and reports suggest that the White House is hoping that the oil-rich Gulf states will be among the biggest donors.

With this money, the White House hopes that 179 economic development projects would be funded. These include infrastructure projects for water, power, telecommunications, tourism, medical facilities, etc.

The US claims that its economic plan will double Palestinian gross domestic product in 10 years, create more than 1 million jobs in Gaza, reduce employment to single digits, and bring down the poverty rate by 50%. Most of these claims have been criticized by diplomats and economic experts as unrealistic. Palestinians have firmly rejected the plan, and say that it completely ignores the Israeli occupation, the main factor impeding the growth of the Palestinian economy. Many also see these economic incentives as an attempt to ‘pay off’ the Palestinians for the land Israel is likely to take over through the deal.

Senior Palestinian leader Hanan Ashrawi tweeted, “First lift the siege of Gaza, stop the Israeli theft of our land, resources and funds, give us our freedom of movement and control over our borders, airspace, territorial waters, etc. Then watch us build a vibrant prosperous economy as a free and sovereign people.” She made it clear that without addressing the political issues of occupation, colonization, displacement and refugees, the US economic plan is dead on arrival. Palestinian president Mahmoud Abbas and a Hamas representative also rejected the economic plan, with Abbas saying that the economic situation should not be discussed before the political one.