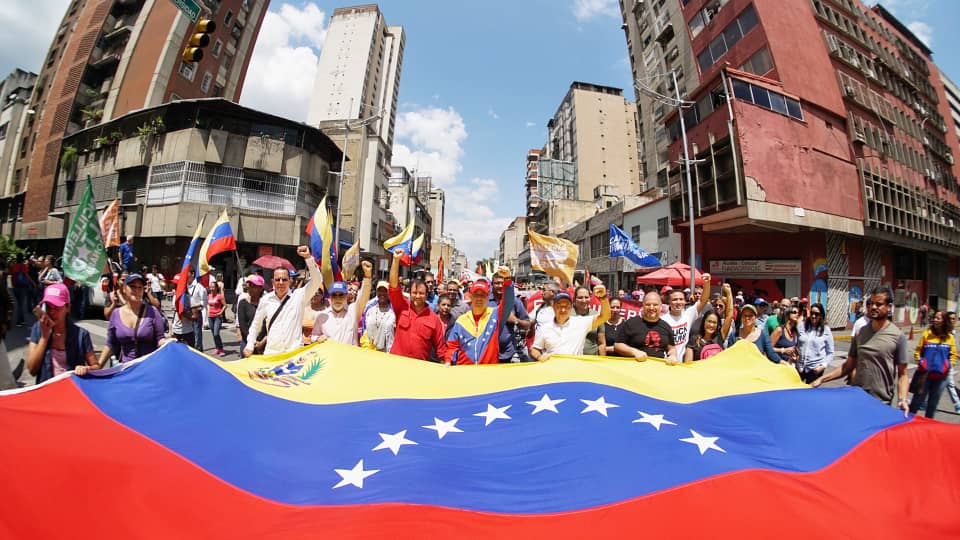 Today the streets of Caracas were once again filled with thousands of Chavista activists and Venezuelan citizens in rejection of unilateral coercive measures imposed by the government of the United States. On August 5, Donald Trump announced a new set of harsh measures against the Bolivarian Republic of Venezuela meant to intensify the campaign of pressure to force democratically elected president Nicolás Maduro out of office.

The order prohibits any type of transactions with Venezuela, which according to the order includes “the state and Government of Venezuela, any political subdivision, agency, or instrumentality thereof, including the Central Bank of Venezuela and Petroleos de Venezuela, S.A. (PdVSA), any person owned or controlled, directly or indirectly, by the foregoing, and any person who has acted or purported to act directly or indirectly for or on behalf of, any of the foregoing, including as a member of the Maduro regime.” The order constitutes a complete embargo on Venezuela.

It also authorizes the Secretary of the Treasury to impose sanctions on “persons who provide support to Nicolas Maduro and his illegitimate regime,” and imposes restrictions on the entry of said persons to the US. It seeks to target those who undermine the National Assembly of Venezuela, which has been declared in contempt of court since 2016, or Juan Guaidó who declared himself “interim president” in January 2019.

Following the signing of the order, the Venezuelan government released a communique denouncing the “new and grave aggression of the Trump administration through arbitrary actions of economic terrorism against the people of Venezuela. Washington has emitted another Executive Order that seeks to formalize the criminal economic, financial and commercial blockade already in place, that has caused injuries in Venezuelan society during the last several years and whose only objective is to strangle the Venezuelan people to force an unconstitutional change of government in the country, in open violation of the principles and aims of the Charter of the United Nations.”

The Executive Order has been denounced far and wide by Venezuelan movements, organizations and collectives as well as organizations world-wide. The move which escalates the aggression against Venezuela has also intensified the international campaign in solidarity with the Bolivarian Republic and its people and against the criminal blockade. Hundreds of international platforms, organizations and movements have released statements and declarations manifesting their solidarity and denouncing the aggressive attitude of the Trump administration.

Many within Venezuela have pointed to the absurdity that Trump is imposing illegal measures on Venezuela in the name of human rights when his own administration is locking up children in detention centers and separating them from their families while his own racist and violent rhetoric about minority groups, especially about the Latinx community, has inspired people to carry-out massacres like the two which took place last weekend.

The order marks a definite escalation in the aggression against Venezuela by the US, however, it is important to point out that the latest order builds off the Executive Order 13692 of March 8, 2015 (Blocking Property and Suspending Entry of Certain Persons Contributing to the Situation in Venezuela) which was signed by former President Barack Obama. Nevertheless, the multi-pronged campaign to force democratically elected president Nicolás Maduro has seen an intensification in the past year.

The cornerstone of the latest tirade against the Venezuelan people has been the allegation that the May 2019 elections were illegitimate, and as such Nicolás Maduro’s second term as president which began January 10, 2019 is illegitimate. Just a week after his swearing-in, a relatively unknown member of the National Assembly Juan Guaidó declared himself “interim president” of Venezuela and received immediate support from the US and its allies.

The Trump administration emphasized that this order and the more than 30 rounds of sanctions are “not against the Venezuelan people, but against Maduro and his ongoing human rights abuses” and that they have “taken careful measures to help provide the Venezuelan people with access to humanitarian aid, including food and medicine.”

However, this has proven to be false and the Venezuelan government, social movements and organizations from Latin America as well as progressive think tanks have demonstrated that the most significant impact of these unilateral coercive measures has been on the people of Venezuela. The confiscation of more than 5 billion dollars from Venezuela through freezing key assets like CITGO, a subsidiary of Venezuelan state oil company PDVSA, and confiscating and blocking financial transactions and account internationally, has directly impacted the government’s ability to assure the basic needs of its citizens are met.

Mark Weisbrot and Jeffrey Sachs at the Center for Economic Policy Research released a report in April 2019 where they wrote that “the sanctions have inflicted, and increasingly inflict, very serious harm to human life and health, including an estimated more than 40,000 deaths from 2017 to 2018.”

In addition to the economic crisis, exacerbated by the sanctions, the Venezuelan people also live daily with the threat of a violent escalation of the current situation in the country. Juan Guaidó and his supporters have openly called for military assistance from the US to force Maduro out of office and as elucidated by Trump’s follow-up statement on Tuesday, “All options are on the table.  The United States will use every appropriate tool to end Maduro’s hold on Venezuela, support the Venezuelan people’s access to humanitarian assistance, and ensure a democratic transition in Venezuela.”