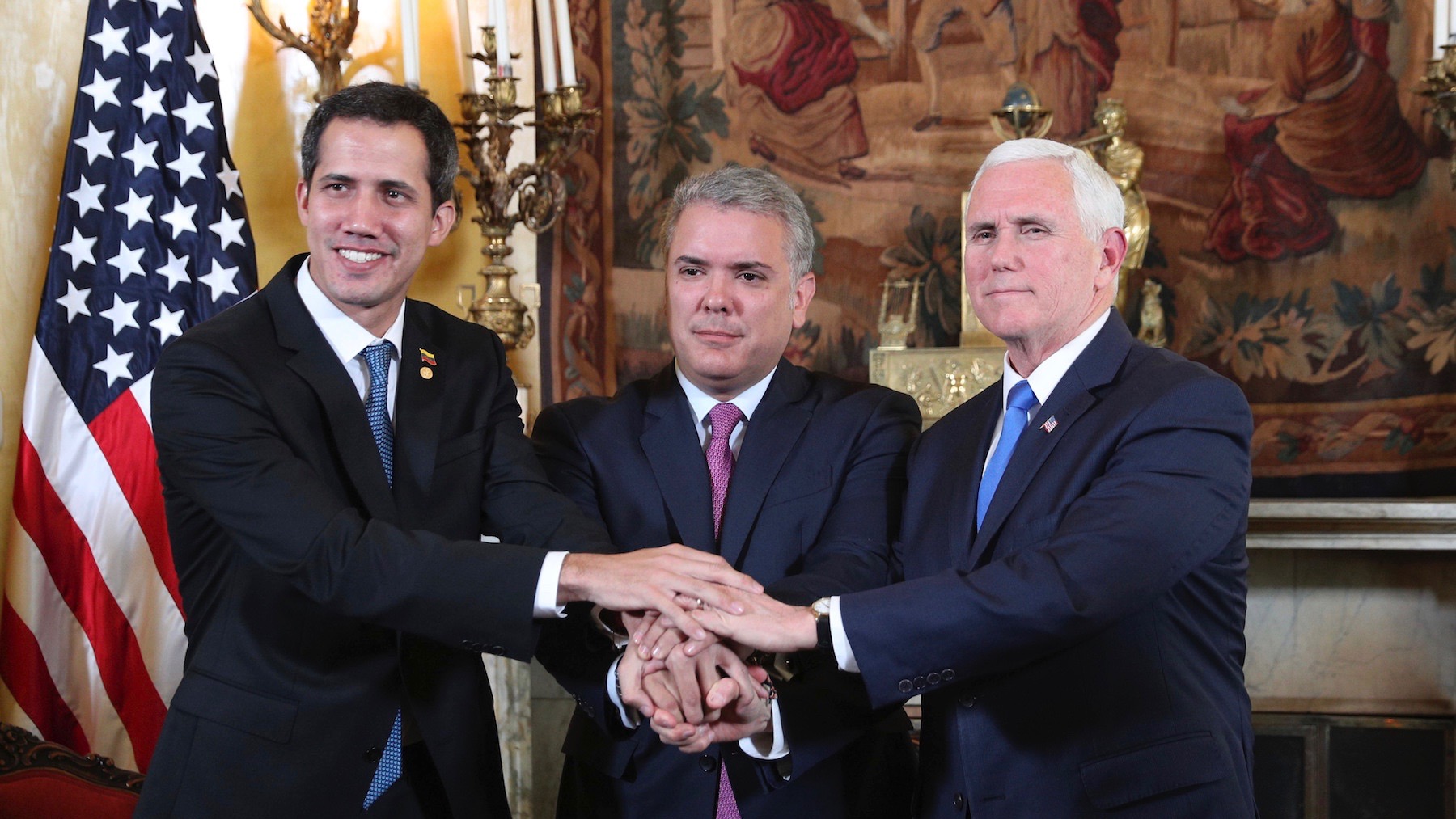 Juan Guaidó, Iván Duque and Mike Pence pose for a photo after a meeting of the Lima Group in Bogota, Colombia, Monday, Feb. 25, 2019. The Venezuelan opposition led by Juan Guaidó has received key support from the US and Colombian governments. Photo: AP Photo/Martin Mejia

It has been nearly nine months since Venezuelan National Assembly member Juan Guaidó declared himself “interim president” of Venezuela and Nicolás Maduro a “usurper”. Despite recognition from imperialist countries and their allies in the Latin America and the Caribbean. as well as constant coordinated efforts with the United States to overthrow Maduro, Guaidó still has no authority or legitimacy within the country. However, that does not mean he has given up his fight to destabilize Venezuela and hand it over to imperialist powers.

On September 11, speaking at the assembly of the Organization of American States (OAS), Guaidó’s ‘representative’, Gustavo Tarre Briceño, with support from the Trump administration, proposed the activation of the Inter-American Treaty of Reciprocal Assistance (TIAR as it is known in Spanish) against Venezuela. The treaty and its activation provides a legal justification for a foreign military intervention.

The TIAR, which was signed in Rio de Janeiro, Brazil in 1947, states the following: “The High Contracting Parties agree that an armed attack by any State against an American State shall be considered as an attack against all the American States and, consequently, each one of the said Contracting Parties undertakes to assist in meeting the attack in the exercise of the inherent right of individual or collective self-defense recognized by Article 51 of the Charter of the United Nations.”

In this case, the justification is that Venezuela is considered a ‘threat’ to the region and that the crisis “unleashed by Maduro” has regional implications and that the treaty can permit the legal framework to push for the end of the usurpation of power by Maduro. They also cited the alleged ‘harboring’ of Colombian guerrilla groups in Venezuelan territory as evidence of the regional impact.

The proposal passed with 12 votes in favor, 5 abstentions and 1 absent. The 12 countries that supported the activation of the treaty were Argentina, Brazil, Chile, Colombia, the Dominican Republic, El Salvador, Guatemala, Haiti, Honduras, Paraguay, the US, and ‘Venezuela’ – as ‘led’ by Juan Guaidó. The Bolivarian Republic of Venezuela officially left the OAS in April 2019. The 5 abstentions were Trinidad and Tobago, Uruguay, Costa Rica, Panama, Peru and the country absent was The Bahamas.

The measure was immediately condemned by the Bolivarian Republic of Venezuela, its regional allies and social movements across the continent. The foreign ministry of Venezuela denounced in a statement the “despicable decision of a small group of governments of the region that, aligned with the interests of the supremacist Government of the United States, invoked the activation of such a disastrous instrument of the history of our continent as the Inter-American Treaty of Reciprocal Assistance (TIAR).”

In the statement, Venezuela also highlighted the historical legacy of the TIAR in Latin America and the Caribbean: “It is necessary to remember that the TIAR was imposed on our region by the United States within the framework of the Cold War, whose purpose was to legitimize military interventions in Latin America for ideological reasons. This happened in Guatemala in 1954, in Cuba in 1961, in the Dominican Republic in 1965, in Grenada in 1983 and in Panama in 1989. It is also important to underline that when there was a real aggression of an extra-continental power against a Latin American country, as in the case of Argentina in 1982 by the United Kingdom, the United States betrayed the continent and ignored its activation, aligning with its partner of the North Atlantic Treaty Organization (NATO).”

With this history in mind, they condemned the fact that “the countries that were invaded by US troops and whose peoples were slaughtered due to the implementation of the TIAR today endorse a similar crime against a brotherly country.”

The ministry of foreign affairs of Cuba also released a statement rejecting the qualification of Venezuela as “a threat to the peace and security in the hemisphere,” and highlighted that it is the interventionist Monroe Doctrine used by the US, the hostility towards Venezuela and the use of this treaty for those means what actually put the regional peace and security at risk. Cuba also called on the governments and people of Our America and the world to oppose the measure “which seeks to justify, through an artificial legal protection, the intervention in the internal affairs of the Bolivarian Republic of Venezuela, which is unacceptable.”

Many social movements across Latin America and the Caribbean have spoken out against the Cold War era treaty and have rejected the latest desperate attempt of the US and the Venezuelan opposition to destabilize the country and overthrow Maduro. The platform Social Movements of ALBA said in a statement, “Today, we call on the people of the world to remind these eleven governments, that the responsibility of a military aggression against Venezuela falls on them, as well as the infamy of violating the international principles of sovereignty and self-determination in order to bring a war to our region, which will only benefit one country, the US, while it will hurt all of our people, without mentioning all of the miseries that it will mean for Venezuela.

What is the TIAR?

TIAR was established at the beginning of the Cold War and has a similar logic to the North Atlantic Treaty Organization, wherein any attack to a country on the American continent would be considered as an attack on the US and its allies, and a justification to respond militarily. As stated above, TIAR was activated several times in the 1950s and 1960s, most notably during the missile crisis in 1962 against Cuba. However, during the Falklands War in 1982, when the United Kingdom sent the British Navy to assert control and authority over the islands and in doing so, killed nearly 700 Argentine soldiers, the treaty was not activated to protect Argentina from the United Kingdom.

The clear bias of towards only US interests has caused several Latin American countries to withdraw from the treaty. In 2002, Mexico formally withdrew from the treaty in response to the growing tension and hawkishness towards the Middle East (the TIAR was also activated after September 11, 2001).

In 2012, the governments of Venezuela, Bolivia, Ecuador and Nicaragua announced during the 42nd Assembly of the OAS in Cochabamba, Bolivia that they would be withdrawing from the TIAR. The countries which were at the time all part of the Bolivarian Alliance for the Peoples of Our America cited that the mechanism was a tool of the US and had to be reformed.

Furthermore, this week photos emerged of Juan Guaidó posing with Jhon Jairo Durán Contreras, alias ‘el menor’ and Albeiro Lobo Quintero, alias ‘el brother’, top leaders of the Colombian paramilitary group Rastrojos. The Colombian National Police later verified that the individuals in the picture are from the criminal paramilitary group the Rastrojos. The photos confirm the suspicion held by many that Guaidó entered Colombia with the support of and in coordination with Colombian paramilitary groups, as explained in this report by Colombia Informa. This raises questions about the extent of the relationship between Guaidó and the paramilitary groups. Guaidó, in response, claimed that he took hundreds of photos with people during his time in Colombia and denied that they gave him any assistance. Colombian President Iván Duque scrambled to his defense and said, “Whether or not there are photos or no, if he said hi or didnt say hi to many people…he is a hero.”