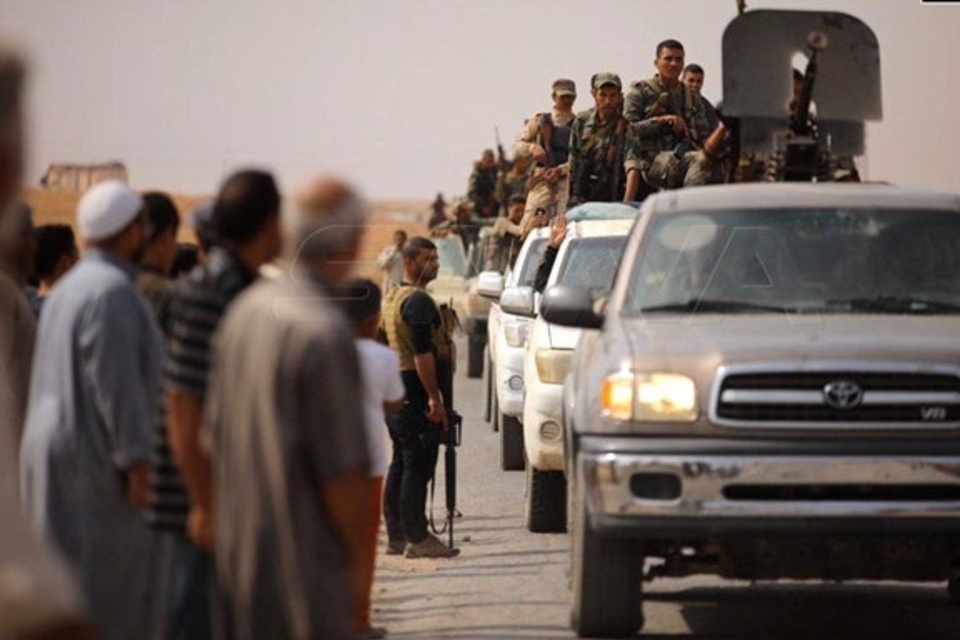 Syrian forces moving into Ain Issa in Raqqa province, after a deal with the SDF. (Photo: SANA)

The Turkish invasion of northeast Syria has entered its seventh day. According to the United Nations (UN), the number of people displaced has reached 160,000, while the Autonomous Administration of North and East Syria (Rojava) authorities have put the number at well over 275,000. Turkish forces are now moving on the city of Manbij, lying to the west of the Euphrates river.

Manbij is an Arab-majority city in the Aleppo province of Syria. The Bashar al-Assad government lost the city in 2012 to rebels who later lost it to the Islamic State (IS) in 2014. The Kurdish-dominated Syrian Democratic Forces (SDF) defeated IS and took over the administration of the city in 2016.

On Monday, as per the deal signed between the SDF and the Assad government on October 13, the Syrian government forces entered areas in Raqqa and Hasaka provinces for the first time since 2013. They have also moved into Manbij and Tel Amar in order to prevent the Turkish forces from capturing the two cities.

In a press conference on October 14, the Turkish president Recep Tayyip Erdogan had announced that Manbij would be the next target in Turkey’s ongoing so-called Operation Peace Spring. However, he also emphasized that the control of the city will be in the hands of the Free Syrian Army (FSA), the rebel militia forces who revolted against the Assad government, and have the backing of the Turkish government.

Control over Manbij will be crucial as it is located on the M4 highway, eastern parts of which are currently controlled by the Turkish forces.

Turkey captured the Kurdish city of Afreen last year, and if it occupies Manbij, it will be able to have a complete control over the entire part of northern Syria adjoining its borders. Turkish and Syrian forces have avoided a direct confrontation so far but this could change in Manbij.

Russia and Iran, who jointly launched the Astana process with Turkey to end the war in Syria, have called the invasion “unacceptable.” China has also asked Turkey to stop its aggression and respect Syrian sovereignty and independence. However, Erdogan is more concerned about the responses from his allies, the NATO countries. During his press conference, Erdogan criticized the European countries and his NATO allies for not supporting Turkey’s fight against “terrorists”.

Though the European Union (EU) has threatened to impose economic sanctions against Turkey if it continues its invasion, most of the member countries are reluctant to act as Turkey is key to preventing a fresh inflow of refugees from Syria into Europe. Similarly, despite all the rhetoric, several states are not inclined to damage their economic relations with Turkey. Turkey-EU trade is worth more than $170 billion.

Even so, some states, including Germany and the Czech Republic, have announced the a halt to arms trade with Turkey. Critics argue that these announcements do not amount to much. Nevertheless, the Turkish economy may suffer due a decline in investments and the boycott calls that have been given by several groups in different parts of the world.

Protests took place against the Turkish invasion in some European cities on October 13.

Meanwhile, the Trump administration announced sanctions against Turkey.  As per an executive order signed on October 14, leaders, individuals and entities involved in the Turkish operations have been blacklisted. Prominent individuals targeted include defense minister Hulusi Akar and energy minister Fatih Donmaz. The interior minister, Suleyman Soylu, is also on the sanctions list. The list was announced by US treasury secretary Steven Mnuchin on October 14.

The sanctions imply freezing of property belonging to the blacklisted individuals in the US, and a ban on all kinds of future transactions with the US, whether direct or tangential.

Trump also tweeted about halting talks related to a USD 100 billion trade deal with Turkey. He announced an increase in the tariff rates on steel to 50%. Turkey is a leading steel exporter, with the US accounting for 5% of its total exports.

Trump confirmed that he has called Erdogan and got an assurance from him that Kobane, a Kurdish city on the border, will not be targeted. However, the Syrian forces have already been deployed in the city, anticipating a Turkish offensive.

Trump reportedly asked Erdogan to halt the invasion and come on the negotiating table with the Kurds. He even proposed to mediate between the two. Turkey is targeting the Kurdish Peoples’ Protection Unit (YPG), a major constituent of the SDF, which has close links to the Kurdistan Workers Party (PKK).  The PKK has been leading a struggle for self-determination in Turkey.

Trump plans to send vice-president Mike Pence and national security adviser Robert O’Brian to Turkey, in order to convince the leadership there to stop the offensive in Syria.

“Turkey’s military offensive is endangering civilians and threatening peace, security and stability in the region,” read Trump’s statement posted on Twitter. The statement clarifies that all the US forces in Syria, except those that are in al Tanaf in country’s southern part, will be withdrawn from the country.

This sudden announcement of sanctions against Turkey is being seen as an attempt to silence those who are critical of the US withdrawal from Syria. Many observers saw it as tacit permission for Turkey to invade Syria. It has also been called a betrayal of the US’ Kurdish allies.

Rising threat of IS

Following the Turkish attack, the SDF was unable to prevent the escape of nearly 800 IS fighters from its detention camp near Ain Issa. There is a high possibility of more of IS fighters escaping. More than 10,000 of such fighters are currently lodged in Rojava prisons, which were maintained with the active support of the US so far. Apart from these fighters, there are around 100,000 family members of the IS fighters, mostly women and children, who are presently living in SDF-run camps.

The SDF will not have the resources to maintain these prisons and camps. Whether the Syrian government forces take control of these camps and prisons is still not clear.

Trump’s baseless allegations about the SDF releasing some of the IS fighters deliberately to create pressure on the US have been denied by his own officials.