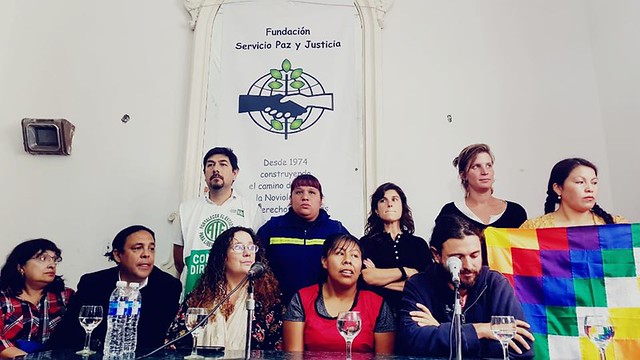 Representatives of social and human rights organizations will travel today Thursday November 28 to Bolivia with the objective to offer solidarity and information about what is happening in the neighboring country after the coup d’état that deposed the elected president Evo Morales.

The delegation will have participation from organizations like Peace and Justice Service, the Permanent Assembly for Human Rights and the American Lawyers Association.

Juan Grabois, lawyer and leader of Frente Patria Grande, is among the representatives in the delegation. During the press conference held on Wednesday November 26 in Buenos Aires, Grabois affirmed that Bolivia “is being ruled by an interim government, a civic-military dictatorship that is impeding the communication about what is happening. That is why our task is fundamental.”

In a declaration, the Argentine delegation in solidarity with the Bolivian people affirmed that the objective of the trip is to “receive their testimonies and activate international mechanisms to protect our brothers and sisters and reaffirm the validity of democracy, the respect to cultural diversity and social rights.”

During their time in the neighboring country the delegation will have an agenda of meetings with Bolivian institutions, human rights defenders, social movements and religious leaders.

The lawyer Gabriela Carpineti, one of the members of the delegation, affirmed that they will record the denouncements and reinforce the fact that as of now, there is not any guarantee for the safety of those who denounce human rights violations, referring to the growing climate of political persecution in the country.

The data of the Ombudsman, [that receives denouncements but does not criminally process nor deal with individual cases] revealed that, since the coup d’état was culminated on November 10, 33 people have died during the protests which reject the self-proclaimed President Jeanine Áñez.

In the conflicts with the police and Bolivian Armed Forces, another 804 people were injured and 1151 people were detained, of which 53 are still in prison.