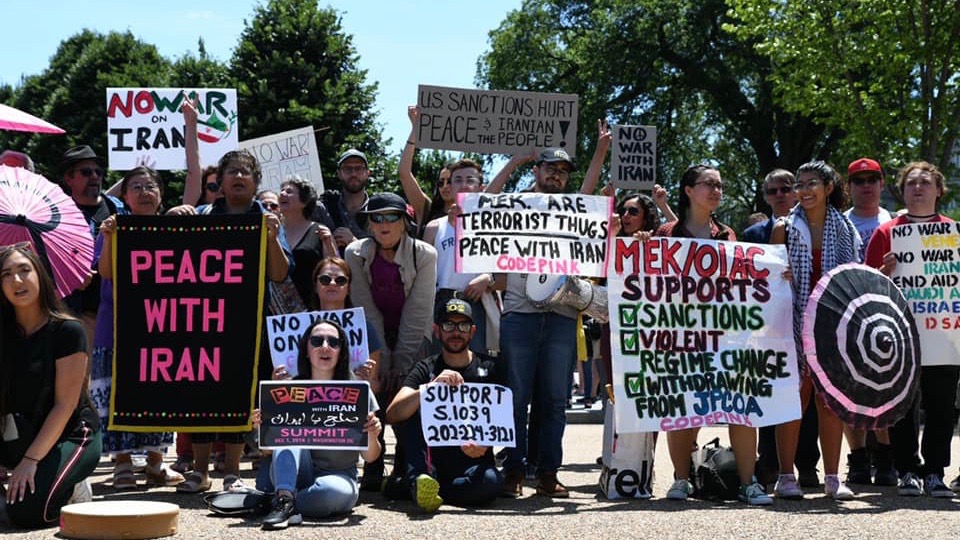 US based peace group CODEPINK mobilizes against US aggression against Iran. Photo: CODEPINK

2019 provides us with enough evidence that imperialism is adapting fast to acquire a completely new form and strategy in the context of rising challenges. Today, imperialism has been moving away from its early 20th century characteristic of developing loyal and dependent states. Events, including coup attempts and sanctions against left governments in Venezuela and Bolivia and wars in Libya, Yemen and Syria and the severe economic and diplomatic offensive on Iran and North Korea show that imperialist powers are using existing faultlines to perpetuate conflicts no matter what the cost. What made imperialism change its methods now and what purpose will serve?

Back to the basics

An answer to this question is impossible without tracing the trajectory of neoliberal finance capital.

Neoliberal finance capital, which became very aggressive in the late 1980s and unfolded its fresh assaults on resources in the name of globalization, has intensified certain contradictions. Unlike the mid-twentieth century welfarism which did improve the economic conditions of the majority of the population at least in its core areas in the West, neoliberal capitalism has no such agenda. Circumstances created due to the wars in the early and mid- twentieth century forced capitalism to be “considerate”. Neoliberal capital on the other hand is a brutal reassertion of 18th century ideas of free market and laissez faire according to which every human being is guided by their “primal instinct.” In short, neoliberal globalization unleashed the old genie of “survival of the fittest,” further dividing all the societies. Soon, the inevitable centralization of capital started becoming visible amid the twin euphoria of “high growth” and “development.” It made cheap labor in the global south a competitor for the working classes in the west. Their real wages stagnated and their living conditions deteriorated, leading to a significant number moving towards ultra-right-wing ideologies which promise the end of this competition through exclusion. It is already taking a form of ethnic and racial supremacism and intolerance of anything remotely unfamiliar (a kind of ultra-nationalism). In the US and most of Europe, such reactionary movements have already taken a firm root, giving birth to politicians such as Trump and developments such as Brexit. Nevertheless, countries such as France have also seen strong counter movements of progressive sections.

In the rest of the world, similar reactionary movements have given birth to Modi in India, Erdogan in Turkey and Bolsanaro in Brazil among others. The reason for the rise of such reactionary movements in the global south can be found in overwhelming tendencies of over centralization of capital and rising inequalities with no hopes for any improvement in the conditions of the majority. With an ideological hegemony, neoliberalism has sought to push the narrative of there being no alternative through its control over influential media and other platforms of socialization. Hegemonic control over technology and resources has enabled the ruling classes to shape the popular narratives and constantly seek to suppress most voices of dissent. In one year, we have seen persecution of Julian Assange, Edward Snowden and Ola Bini, among several others. This virtual and real silencing of the voices of dissent however, has failed to stop the rise of resistance, creating possibilities of greater conflicts. People from Chile to Algeria, Lebanon and Iraq have taken to the streets demanding a complete overhaul in the economic and political systems in their countries.

The post-globalization world has seen the dominance of the US, both in terms of its military power as well as its financial clout. Despite the formation of the Euro and persistence of Pound Sterling as a viable and strong currency, the Dollar remains the most preferred and used international currency giving the US tremendous power to dictate terms of international trade and decide the financial fate of societies. The growing Chinese economic might is still far away from breaking this dominance though initial signs of the struggle are quite visible now. The so-called trade wars between China and the US and the race over 5G technology may result in something completely unexpected sooner rather than later. However, that is still in the future. The US, along with its ally the UK, still controls global capital flows through tax havens, digital monopolies and global financial institutions.

The US also remains the unmatched military superpower despite the re-emergence of post-soviet Russia and preliminary Chinese assertions. It still remains the sole power to have military presence all across the globe. Its defense budget is $989 billion per annum which is more than the combined defense budgets of next 10 countries, including China and Russia. Through the combination of its financial, digital and military power, the US can still dictate terms but we have also seen the emergence of low-key but decisive resistance in the form of asymmetric warfare. Some states like Iran and non-state actors such as Hezbollah in Lebanon and the  Houthis in Yemen have shown that if they keep their ambitions in check, they can inflict enough wounds on the American war machine which mostly operates through its regional allies such as Israel and Saudi Arabia. Iran’s daring maneuvering in the Persian Gulf in 2019 is a classic example of it. The spread of cheap technologies of war has enabled them to sustain the resistance.

At least in west Asia, it seems like the US under Trump is gradually losing its ability to be the leader of the imperialist block. In Syria, it failed to respond to the challenges thrown by its long-term ally Turkey and rival Russia. In Yemen, it failed to keep its allies together and in Afghanistan, it could not draw any strategy in the face of its proteges in government failing to see eye to eye with the Taliban. The Iranians could stand and expose the bluff of military threats posed by the US and its regional allies. Apart from Russia and China, even allies such as the EU and Turkey refused to completely follow its sanctions regime vis-à-vis Iran. In other parts of the globe too, similar examples are aplenty. Trump’s overambitious attempts to co-opt Kim Jong Un into the imperialist block ended in embarrassment. The people of Venezuela defied US interventions against their legitimate government in favor of an imposter, Juan Guaido. Nevertheless, the US has been able to sustain the “security threat” narrative in the region which helps it maintain its armament export industry. Every year, the US sells billions of dollars worth of weapons to its allies directly. It has also shamelessly defended and strengthened the occupation of Palestine.

To conclude, we have seen contradictory developments related to imperialism last year. Though it is clear that imperialism led by the US is facing a substantial challenge today, the trajectories of its alternatives are not so clear yet. Meanwhile, the success of imperialist manoeuvring in creating and sustaining chaos in different parts of the world in forms of war and instability is one clear characteristic we can notice from the events of last year. It seems in the face of challenges, today’s imperialism has adopted the strategy akin to Louis XV’s “after me the deluge”. There is a distinct lack of care about the fate of people and societies as long as potential threats are eliminated. As Marx said, it has long been a watchword of capitalism. Imperialism may be undergoing a shift in strategy. However, the more it changes, the more it remains the same.