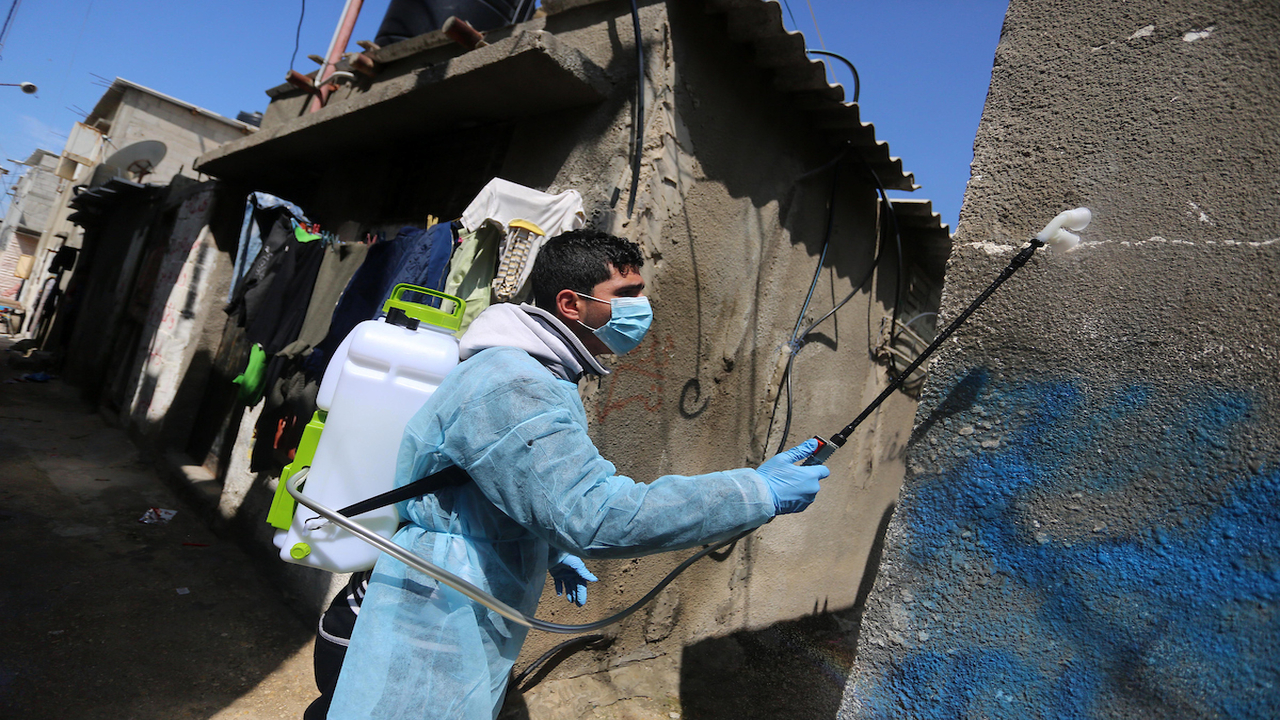 A Palestinian worker wearing protective gear disinfects streets as a preventive measure amid fears of the spread of the coronavirus at the al-Shati refugee camp in Gaza City, on March 16. (Photo: Ashraf Amra/APA)

The announcement of the first two positive cases of COVID-19 in Gaza on March 22, Sunday, has rightly set off alarms, particularly among health officials and international health organizations. The two Palestinian men detected with the Coronavirus infection had recently traveled to Pakistan and have since been placed in a quarantine facility near the Egyptian border with Gaza. The two individuals were also not allowed to mix with the wider population of Gaza. The Palestinian territory has been under a debilitating blockade since 2006, imposed by both Israel and Egypt.

Following news of the two cases, the World Health Organization (WHO) immediately dispatched its officials to Gaza to take stock of the situation. The Hamas-administered territory has also taken precautionary measures to prevent the spread of the virus, such as the closure of all restaurants, cafes, wedding and reception halls, as well as a ban on large gatherings, especially during funerals. Friday prayers at mosques are suspended until further notice and weekly markets in the cities of the Gaza strip have also been stopped.

WHO has supplied Gaza with hundreds of Coronavirus test kits and personal protective equipment. It has also promised the supply of additional necessary medical equipment in the near future. However, both the WHO and the United Nations (UN) have repeatedly called for urgent international assistance required to prevent a major outbreak and for the supply of medical aid to the besieged Gaza strip. The UN estimated that the urgent requirement to meet the humanitarian needs of the civilian population is around $7 million dollars.

Fears of a deadly outbreak in Gaza had been growing, with extremely frail and insufficient healthcare infrastructure catering to a population of close to two million. The healthcare system has not only suffered due to the brutal Israeli-Egyptian blockade of close to 14 years, but has also undergone destruction and massive setbacks during the three Israeli invasions of Gaza, in 2008-09, 2012 and 2014. The resulting destruction of many of Gaza’s hospitals and related infrastructure has made it difficult even under normal circumstances for Gazans to access adequate healthcare. It now makes Palestinians in Gaza especially vulnerable to the Coronavirus.

Another major issue is the shortage of essential and life-saving medical equipment and medicines, mainly due to Israeli restrictions on the movement of goods through the Israel-Gaza border. This is compounded by the restrictions on the Gaza-Egypt border imposed by the Egyptian dictatorial regime of Abdel Fateh el-Sisi.

Sources from the Palestinian health ministry recently confirmed a massive shortage of ventilators and intensive care unit (ICU) beds in Gaza. The current count of 56 ventilators and 40 ICU beds can at most be increased to 100 beds for dealing with emergency situations. The Gaza strip also suffers from low electricity supply, averaging between 4-6 hours per day, because Israel has destroyed its power plants and due to the lack of an adequate fuel supply to keep generators running at hospitals for medical treatment. Electricity is of utmost importance especially for critical patients, emergency surgeries, and life-threatening conditions or ailments.

WHO and the UN have both raised these concerns and called for the state of Israel to immediately lift the air, sea and land blockade on Gaza to help avert a catastrophic human disaster. The territory also faces a shortage of qualified doctors, besides lacking vital supplies of necessary medical equipment such as disinfectant sprays, testing kits, protective masks and suits that can help control the spread of the virus.

Several international human rights and health organizations have strongly urged Israel to end its blockade and lift the restrictions on the movement of people and goods to and from Gaza, so as to facilitate the supply of medical items and to make available the necessary number of doctors required to cater to its two million residents. They have also called upon the Israeli health ministry to provide medical and humanitarian assistance to Gaza. Under international law, Israel is obligated to help the health ministry in Gaza to treat and control the potential outbreak.

The violent repression against the Great March of Return protests that Palestinians have been staging since March 2018 has also added burden on Gaza’s already under-pressure hospitals and medical centers. The number of injuries inflicted by Israel forces through live and rubber-coated metal bullets, tear gas canisters, water cannons on Palestinian protesters have strained the hospitals and medical personnel. Around 25,000 injured men, women and children, have filled the hospitals, many overcrowded beyond their capacity, with patients lying on stretchers in the corridors and outside the hospital buildings, awaiting treatment.

The COVID-19 pandemic has killed more than 19,000 people worldwide and infected more than 400,000. A large-scale outbreak in Gaza will spell doom for the extremely vulnerable civilian population which is already living on the edge of human survival. To help mitigate the impending crisis, Israel must immediately lift its siege on Gaza. The international community and organizations such as WHO, UN, along with other medical relief organizations, must also assist the people of Gaza to prevent the spread of the deadly virus in the occupied Palestinian territory.