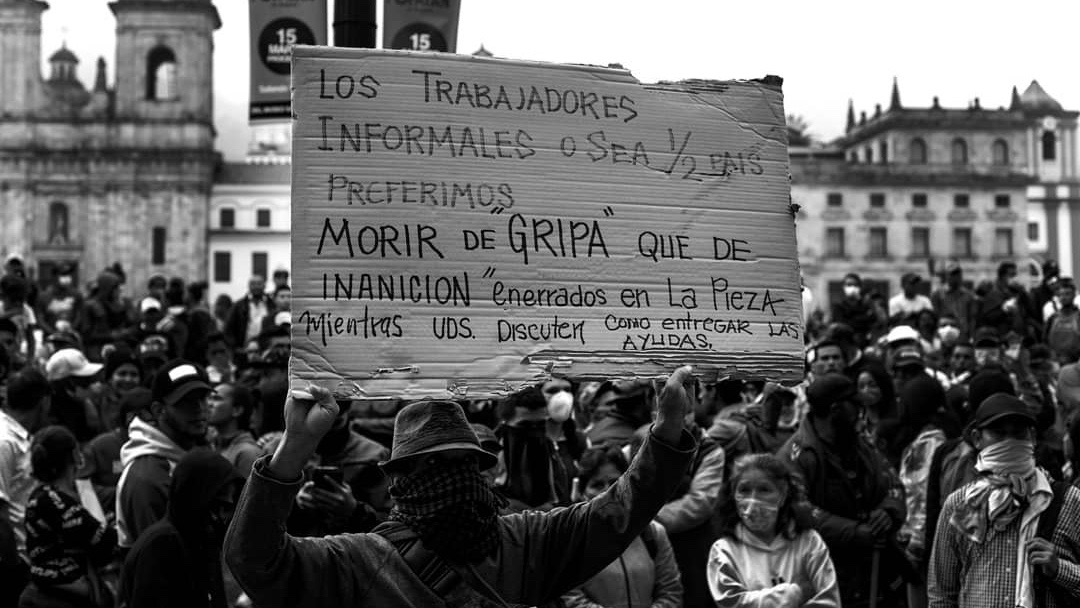 Mobilization of workers of the informal sector demanding government protections in Bogotá, Colombia. The sign reads: "As informal workers, aka half of the country, we would rather die of a "cold" than of starvation shut inside a room while you discuss how to give us aid". Photo: Luis Carlos Ayala

The rapid spread of the COVID-19 pandemic has upended the daily lives of people across the planet. Billions are in various stages of ‘lockdown’ and ‘social distancing’ has become a universal term. The follies and weaknesses of the world’s leadership – from Trump and Boris Johnson to Narendra Modi and Cyril Ramaphosa and many others – are on full display. We are clearly in the middle of a global crisis.

The crisis may be unprecedented but it is not new. Lest we forget, only two months ago, we were staring at the possibility of a disastrous war after the brazen assassination of Iranian general Qassem Soleimani by the US. The coup in Bolivia and the repeated coup attempts in Venezuela had marked yet another blow to the sovereignty of people in Latin America. Across the world, thousands continued to suffer extreme poverty, homelessness and structural violence. All of this was ‘normal’ life, prior to the crisis.

The spread of the pandemic has only heightened and exposed many of these contradictions. As always, the most vulnerable are the poor, the migrants, the refugees and minorities. Meanwhile, it is clear that the essential workers in this time of crisis are not the bankers or the hedge fund managers, but the nurses, cleaners, grocery store clerks, sanitation workers – the working class. We also see the true priorities of leaders of capitalism and imperialism. Right-wing leaders like Donald Trump and Jair Bolsonaro are willing to put the lives of their people at risk in order to keep the markets running.

The pandemic has also highlighted the risks of under-investment in public health and infrastructure which has accelerated under the neoliberal economic regime and was a major factor in the economic downturn that was well underway before COVID-19 paralyzed the world.

This deeper systemic crisis, which leftists and progressives have been calling attention to for years, is a direct result of the imperialist neoliberal global order which places profits and the unprecedented accumulation of wealth over protecting people and guaranteeing their basic rights.

In this context, progressive forces across the world have come together to call for the International Week of Anti-Imperialist Struggle to take place in the second half of 2020 in order to denounce the actions of imperialist forces and their impact on the peoples of the world and the planet itself. The organizations affirm that, “imperialism is putting the future of life on the planet at risk, with its militaristic policies of intervention and aggression and of catastrophic environmental degradation.”

In the context of the Coronavirus pandemic, these organizations have called for a struggle against the attempt by the capitalist sector to make the working-class and the masses bear the consequences of costs of this crisis, as happened in the aftermath of the financial crisis of 2008.

The organizations have made a number of demands in light of the crisis. These include the deployment of all public and private resources to deal with the pandemic while paying attention to the needs of the most vulnerable. They have also called for an immediate cut in military spending and the utilization of the resources thus obtained for “human security system that invests all the resources of the planet to create dignified lives for people.” The strengthening of social systems and an end to unilateral criminal sanctions imposed by the United States are other key demands. The organizations have called for solidarity with all health workers and among the people as a whole in a time of international humanitarian crisis.

The demands point to the intertwined nature of the struggles against the pandemic and against imperialism. The US sanctions on over 50 countries and its policy of militarism (Eg: the 800 foreign military bases) are not only a barrier to world peace but also impede spending on vital infrastructure that could help countries deal with crises such as the COVID-19 pandemic. This has only been compounded by US and European control over the levers of international finance and their advocacy of harsh austerity policies which have left many parts of the world completely unprepared to deal with a crisis of this nature.

The emergence of far-right movements and the rise to power in many countries have served to distract the masses from the structural problems of capitalism and directed their anger and frustration to the most marginalized sectors of the population. Meanwhile, these governments have exacerbated the misery and precarious conditions of the working class and marginalized groups through their pursuit of right-wing economic policies.

People’s unity against the right

It is in response to the drastic worsening of conditions for the working class across the world that people’s movements, organizations, political parties, trade unions, peace movements and intellectual networks have made the call for the International Week of Anti-Imperialist Struggle in the second half of 2020.

Cultural activities, seminars, activities of political education, and mass mobilizations will be held during the week with the objective of highlighting the dangers of imperialism for the people and calling on them to overcome this moment of uncertainty. The declaration affirms “We know that our strength lies in our mobilization.”