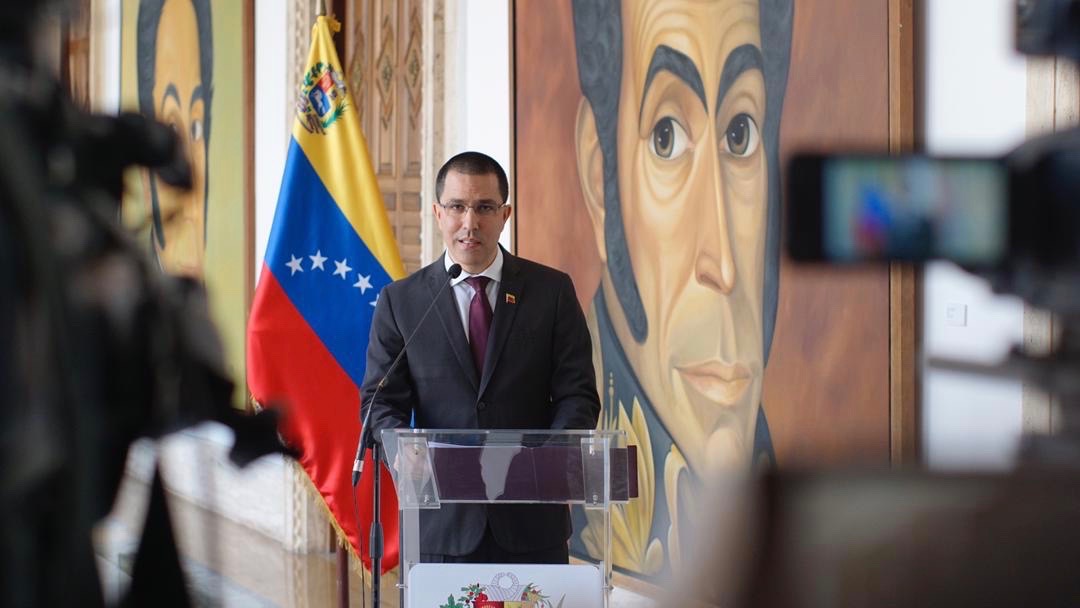 Jorge Arreaza condemned the false charges pressed against Nicolás Maduro and others in a press conference on March 26. Photo: Foreign Ministry Venezuela

Venezuelan Foreign Minister Jorge Arreaza condemned the charges of “narco-terrorism” levelled by the US against president Nicolás Maduro on March 26 as “miserable, vulgar, and unfounded.” He said that the allegations were part of a new coup d’état attempt against the constitutional government. In a press conference held following the announcement of the charges by the US, Arreaza also admonished the Trump administration for attacking the people of Venezuela and its democratic institutions “in moments where humanity is confronting one of the fiercest pandemics.”

Earlier in the day, US attorney general William P. Barr had said that Maduro and top Venezuelan government and judicial officials were being indicted for narco-terrorism, money laundering and other drug-related offenses. He also announced a reward of USD 15 million for anyone who aids in the arrest of Maduro.

Responding to the charges, Arreaza declared that “the policy of forced regime change in Venezuela, is destined to fail. By offering bounty, in the racist cowboy style of the wild west, it shows the desperation of the supremacist elite in Washington and their obsession against Venezuela to achieve electoral returns in the state of Florida.”

Arreaza detailed how the US and Colombian governments have planned, financed and directed terrorist actions against the Bolivarian Government of Venezuela for the past two years. “The absolute complicity and submission to the United States by the Colombian authorities is clear, they have not paid attention to the grave denouncements and have underestimated the concrete information that we have promptly provided them, they have lent their territory and resources for conspiring against Venezuela, in direct violation of international agreements and the Charter of the United Nations itself,” he said.

While announcing the indictment against the constitutionally elected president of Venezuela, US Attorney General Barr said that charges would also be pressed against defense minister Vladimir Padrino López, attorney general Tarek William Saab, president of the Supreme Court Maikel Moreno, and 11 other current and former Venezuelan officials. Barr also announced a sum of USD 10 million for information that helped in the arrest of some of the officials.

The indictment claims that Maduro and other government officials in Venezuela worked hand-in-hand with members of the Revolutionary Armed Forces of Colombia (FARC, now demobilized) to traffic cocaine from Colombia through Central America and to the United States, using government institutions.

US attorney Geoffrey S. Berman of the Southern District of New York alleged that Maduro and others “expressly intended to flood the United States with cocaine in order to undermine the health and wellbeing of our nation. Maduro very deliberately deployed cocaine as a weapon.”

They announced that Maduro, Diosdado Cabello Rondón, a leader of United Socialist Party of Venezuela, former official Hugo Carvajal, as well as former FARC leaders Jesús Santrich and Iván Márquez, are being charged with a series of drug-trafficking related crimes that carry sentences from 10 years to life in prison.

US Attorney Ariana Fajardo of the Southern District of Florida complained that her district had suffered the consequences of the “corruption” of the Venezuelan government and claimed “these corrupt officials and their co-conspirators have used South Florida banks and real estate to conceal and perpetuate their illegal activity.” At one point during the press conference, Fajardo even implied that this alleged corruption-drug-trafficking scheme of the Venezuelan government is a driving factor behind the gentrification process in Miami which has pushed working-class communities to the peripheral areas of the city.

The charges mark an escalation of the attempts by the United States to destabilize and remove from power the constitutional and democratically elected government of President Nicolás Maduro. Since January 23, 2019, the US has refused to recognize the government of Maduro, instead recognizing the self-declared president Juan Guaidó who is a member of Venezuela’s National Assembly. Despite multiple attempts to incite mass mobilizations against Maduro to take him out of power, Guaidó and his allies, most important of which the US, have been unsuccessful.

William Serafino, research and journalist with Misión Verdad, tweeted: “Let’s tell things as they are: the US is financing a covert and illegal military operation to assassinate/kidnap Maduro and take out the head of the Venezuelan state. The false accusation of the State Department is just the “institutional” cover that justifies it all.”

He also tweeted, “The US, the most important narco-state in the world accuses Maduro of being a “narco trafficker” without evidence. And since they cannot intervene directly, they announce a prize of $15 million to paramilitaries, criminal organizations and military contractors so that they do the dirty work of magnicide.”

Attacks on Venezuela amid global pandemic

The world is reeling as the number of confirmed COVID-19 cases has crossed 500,000, with close to 23,000 deaths. While countries like Cuba and China have made heroic efforts of international solidarity by sending teams of healthcare professionals and supplies, the US has taking advantage of the circumstances to advance its attacks on countries like Venezuela and Iran.

Venezuela has so far done an impressive job of containing the spread of the pandemic due to important social, economic and public health measures enacted by the government. Most of Venezuela has been under strict social isolation for nearly two weeks and the structures of people’s power, such as the commune and food distribution formations, have been activated to help ensure that all have access to healthcare, medicine, and food.

However, these measures require funding which is rendered difficult due to the financial crunch that is a result of the criminal sanction on Venezuela. The Venezuelan government had sought a $5 million dollar emergency loan from the International Monetary Fund which had earlier announced that it was providing emergency funds to help developing nations combat coronavirus. The loan request was rejected by the IMF, with the justification that there was no clarity on the recognition of Nicolás Maduro.

When Attorney General Barr was asked by a reporter why the DOJ was pursuing these charges and intensifying the tensions with Venezuela in the midst of a global pandemic, he responded that it was actually good timing because the “best way to support the Venezuelan people at this time is to rid the country of this corrupt [leader]”. He also alleged that Maduro’s government has been blocking supplies from entering to combat Coronavirus.

The DOJ’s indictment has also been criticized for its hypocrisy. Attorney general Barr explained that they were pressing charges against members of the Venezuelan government in order to save the Venezuelan people and fight corruption. He also praised the government of Colombia and called it an ally.

However, the truth is that throughout the last three years of intensified attacks on Venezuela from the guarimbas to the self-proclamation of Juan Guaidó, the Colombian government has played a key part logistically and politically. This support increased exponentially when Iván Duque, a protege of former president Alvaro Uribe Velez, took office as president of Colombia. Under Duque’s rule, hundreds of human rights defenders and social leaders have been assassinated, several high-ranking members of his government have been involved in corruption scandals and the number of criminal narco groups has multiplied, as has production. Uribe himself is involved in 270 legal cases and is accused of having links to several narcotrafficking and paramilitary groups, in addition to committing flagrant human rights violations. It is this Colombian establishment that was hailed by William Barr.

Another key US ally, Honduran President Juan Orlando Hernández was investigated by a federal court in New York in a drug-trafficking case where it was revealed that he received large bribes from drug traffickers. This money was reportedly used for his presidential campaign in 2013. Hernández has also been repeatedly denounced for corruption and embezzlement. However, he too has not been the subject of any criticism, forget action on the part of the US government.