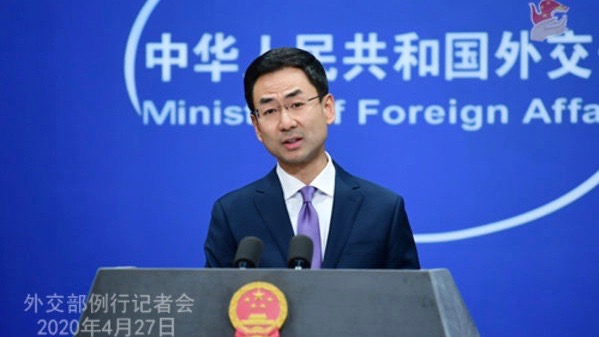 Chinese foreign ministry spokesperson Geng Shuang, at a news conference on April 27, Monday, responded to the attempts to blame China for the COVID-19 pandemic. Without naming the US, the ministry warned against dragging China into political debates for the sake of electoral gains. The statement is being viewed as a response to a recently revealed anti-China memo circulated among senior Republican Party members of the US Congress and the party’s candidates in the upcoming elections.

The 57-page memo was exposed in a report by Politico on April 24. It was reportedly circulated by the National Republican Senatorial Committee which will be in charge of the party’s electoral strategy. It asks members “Don’t defend Trump, other than the China Travel Ban – attack China.” The memo has evoked serious concern from the Chinese government.

The memo outlines an anti-China campaign strategy for the months leading up to the US presidential elections scheduled for November this year. It maps out a three-step narrative asking party members to blame China for “causing” and the “covering up” the pandemic, to attack the opposition Democratic Party for being “soft” on China, and also call for sanctions on China over the virus outbreak.

Meanwhile, US president Donald Trump has continued to blame China for the COVID-19 pandemic. On April 27, Trump at the White House press conference said that his administration “is not happy with China,” and added that an investigation is underway.

These are the latest attempts this week by the Trump administration and the Republican party to target China. Earlier this month, the US halted all funding to the UN agency, World Health Organization (WHO), accusing it of being China-centric and covering up China’s mistakes. Last week, State attorney generals of Mississippi and Missouri, both belonging to the Republican Party, filed a lawsuit against China at a federal court, holding it responsible for the COVID-19 outbreak in their States and demanding damages.

The US is currently the worst-affected country with over 1 million cases reported so far, accounting for nearly a third of the global number.

The world stands with Palestine