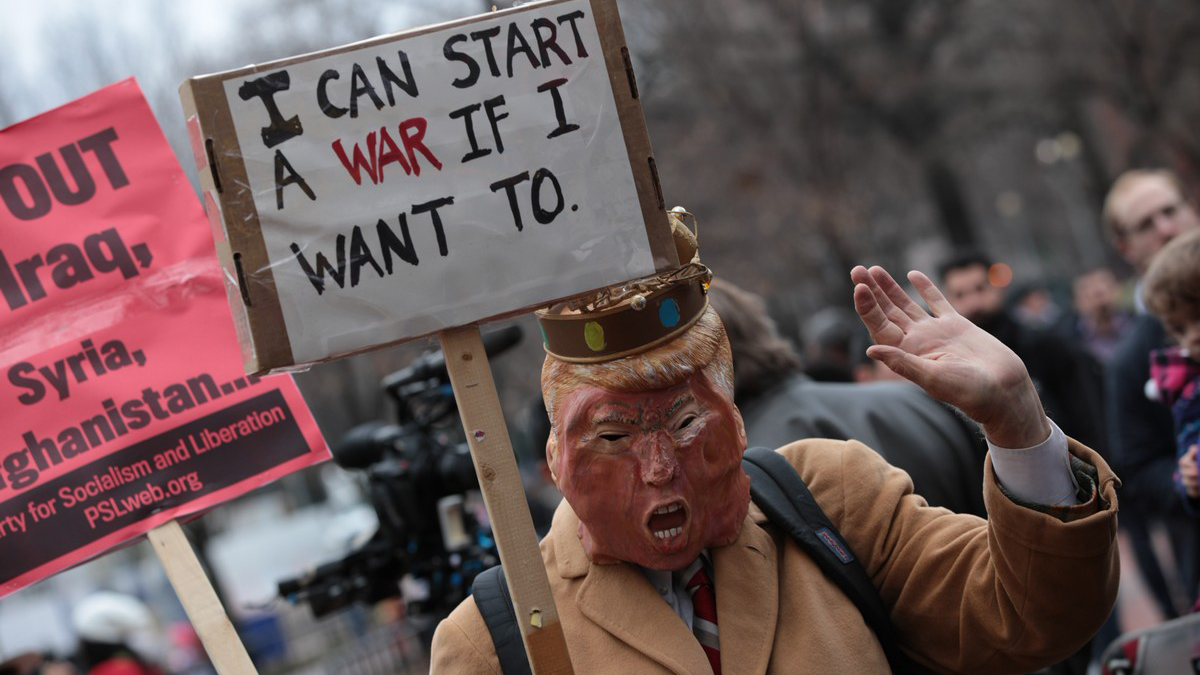 Anti-war protesters in a demonstration at Washington D.C. protesting the assassination of Qasem Soleimani and the escalation of conflict with Iran (Photo: Yasin Öztürk/Anadolu Agency)

The Iran War Powers Resolution lay in tatters as the United States Senate fails to uphold it against a presidential veto. President Donald Trump vetoed the resolution, on May 6, Wednesday, despite having been passed by both houses of the US Congress, with bipartisan support. This was his seventh veto of a bill passed by the Congress, ever since he assumed the presidency in 2017.

The Senate that held the vote within a day of the veto, on May 7, to override it, voted 49-44 in favor of overriding the veto. But since the margin required to overturn a presidential veto is two-thirds of those present and voting, or around 62 of the 93 present at the time, the veto prevails.

Trump vetoed the bill calling the resolution “insulting” and an electoral ploy by the opposition Democratic Party for “an election on November 3 by dividing the Republican Party.” He also criticized the Republican Party members who voted in favor of the bill for apparently having “played right into their hands.”

The vetoed bill, introduced by Democratic senator Tim Kaine, sought to bring an end to all hostilities against Iran unless authorized by the Congress. It was introduced in January, this year, following the Baghdad airport bombings conducted by the Trump administration that led to the assassination of high-level military officials of Iran and Iraq.

Among those killed included Qasem Soleimani, who headed Iran’s elite Quds Force and was a major general in Iranian Revolutionary Guard Corps. Abu Mahdi al-Muhandis, deputy chairman of Iraq’s Popular Mobilization Forces, was also among those killed in the bombing. The attack was widely criticized both within and outside the US as an act of war without any provocation.

Similar resolutions were tabled in both the houses of the US Congress within days of the attack, sponsored by the progressive sections of the Democratic Party, including senator Bernie Sanders, and representatives Ro Khanna and Ilhan Omar.

Kaine’s resolution was eventually passed as a joint resolution in the Senate on February 13 with a vote of 55-45. This was despite a Republican majority in the Senate, as several leaders of the ruling party in the Congress also came out to oppose the unilateral attacks conducted by the president. The House of Representatives passed it on March 11 with a vote of 227-186. It was eventually tabled for presidential approval earlier this week on May 5.

The president also has limited authority to use force against non-state actors under different legislation, including the highly controversial George W. Bush-era legislation, Authorization for Use of Military Force (AUMF). Nevertheless, the president’s powers in the use of military force has been a historically contentious issue, especially when it can push the US into a war-like situation.

Responding to Trump’s veto and his characterizing of the resolution as an “insult”, anti-war group Codepink tweeted that “The only insult is allowing innocent Iranians to continue suffering under brutal US sanctions.”

Trump vetoed the Iran War Powers resolution yesterday, dismissing it as an "insult" created by Democrats in order to win the election.

No, Mr. Trump. The only insult is allowing innocent Iranians to continue suffering under brutal US sanctions. #PeaceWithIran https://t.co/588GS8kdqX