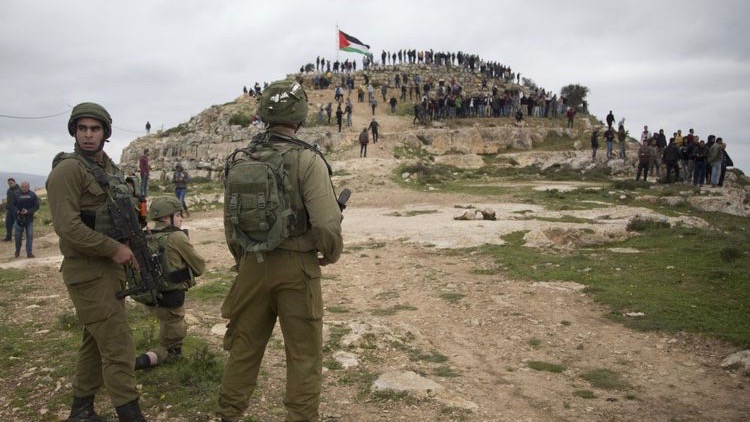 Israeli soldiers surround Palestinians demonstrating against expansion of Israeli settlements in Beita village near Nablus in the occupied West Bank.

US secretary of state Mike Pompeo, in his visit to Israel on May 13, Wednesday, gave the green signal for the proposed Israeli plans to annex the illegal Jewish settlements. The move to annex the settlements in the occupied Palestinian territory of West Bank and the strategically important Jordan Valley will be in contravention of International law and also considered a war crime under the Geneva conventions.

This support for further Israeli confiscation and colonization of Palestinian land came two days ahead of the Nakba day. No pretense of neutrality was made by Pompeo during his visit. He also did not meet any Palestinian leaders.

The further annexation of Palestinian land is high on the priority list for the new coalition Israeli government of prime minister Benjamin Netanyahu and former Israeli army chief Benny Gantz. The agreement to form a unity government signed between the two includes a proposal to introduce a legislation to annex the territories concerned by July 1.

The Trump administration’s blatant support to Netanyahu’s expansionist policies in Palestine, the recognition of Israeli sovereignty over occupied Golan Heights, shifting of the US embassy from Tel Aviv to Jerusalem, as well as recognition of illegal Israeli settlements, all go against the long held US policy of a two-state solution based on 1967 borders, and are also in violation of multiple international resolutions and laws.

The US wants to play powerbroker in a fight over the Nile River, but a bigger threat looms