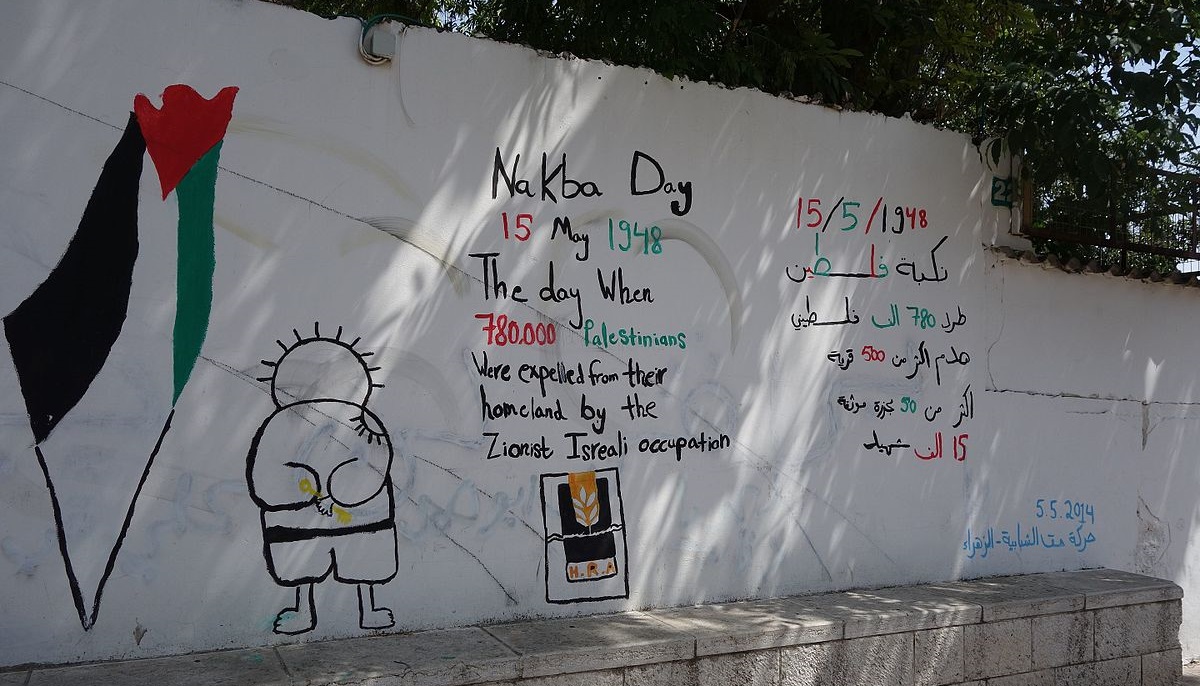 It is not to trivialize the gravity of the events before May 15, 1948 or what followed, to say that every day is a Nakba day for Palestinians. The Nakba day is a tragic reminder of the period when the residents of hundreds of Palestinian villages and towns were forced into exile by Zionist militia. Today, the Palestinians continue their resistance to bids to strip them of their land and their homes through the annexation of settlements and the ‘Deal of the Century.’

It has been 72 years since the massacre of thousands of Palestinians and the forced exile of many more. Those who left believed they would be back soon. They left their belongings  and the crops standing on their land, and took only what was essential for survival. Little did they know that most of them would never see their homes again.

Nakba literally means catastrophe or disaster in Arabic. What happened in 1948 and on similar lines in 1967 is one of the gravest examples of ethnic cleansing in human history. However, those were not one-off events. Israeli occupation forces continue razing Palestinian houses to the ground, destroying crops, uprooting their orchards and plants, and installing illegal settlements all across the occupied West Bank and East Jerusalem. Israeli occupation is “creating facts on the ground” in pursuit of its project to wipe out the history and memory of vibrant Palestinian life.

Ethnic cleaning in the Palestinian mandate

The Zionist project which started in late 19th century had the typical colonial characteristic of valuing land and seeing people as disposable. In a classic form of colonial propaganda, they gave the call to Jews across the globe to move to “a land without people.” Historical Palestine has a record of continuous human presence since the dawn of civilization. However, the Zionists who were brought to this territory portrayed the Palestinian inhabitants as intruders.

In the days preceding and following May 15, 1948, Israeli militia attacked several villages and towns in historic Palestine, massacring thousands and forcing hundreds of thousands into exile in what is now known as “Plan Dalet”. One estimate states that in March, April and May 1948, Israeli militia, primarily the Haganah, killed more than 15,000 Palestinians, and forced almost 800,000 into exile. According to some estimates, more than 400 Palestinian villages and towns were ethnically cleaned during this period. The Nakba, planned and organized by the founders of Israel, has caused one of the largest and perhaps the longest refugee crises in modern human history.

The Palestine partition plan (UN general assembly resolution 181) in 1947 had already given the Zionists more than 55% of the land of historic Palestine despite the fact that around 70% of inhabitants were Arabs. The British colonial administration knew that this resolution would be rejected by the Palestinians. The British used this as an excuse to abandon Palestinians and deliver the land to the Zionists as promised in the 1917 Balfour declaration.

The protagonists of this ethnic cleansing were the Zionist militia, primarily Haganah, which by any count was a terrorist organization. The planning for this took place under the leadership of David Ben Gurion, the first prime minister of Israel. Also involved in these plans were many of the future leaders of Israel, including Moshe Dayan, Ariel Sharon and Yitzhak Rabin. All this planning took place before the unilateral declaration of the state of Israel on May 14, 1948. Soon, all these militia groups became the part of Israeli Defence Forces (IDF).

Israeli militias ad the IDF used the war declared by the neighboring Arab countries in 1948 to force out more Palestinians from areas under their control.  By the end of 1948, Israel had control over 73% of all the land of historic Palestine and the Arab population had become a minority within these few months.

The ethnic cleansing of 1967

Most of the Palestinians who were forced out of their homes in 1948 stayed in refugee camps in the nearby cities, mostly in the West Bank, East Jerusalem and Gaza, controlled by Jordan and Egypt respectively. A large number of Palestinians also moved to neighboring Lebanon in the north.

The tragedy of the Palestinians already uprooted from their homes, however, continued. In 1967, a second wave of the killing and displacement happened when these refugees were forced to go to Jordan and other parts of the Arab world. This was after Israel took over the West Bank, East Jerusalem and Gaza. Palestinian refugees in Lebanon faced yet another massacre by Lebanese militia supported by Israel in Sabra and Shatila in 1982.

Israel brought a Nakba to Palestinians by killing them and destroying their homes each time it extended its control over territory.

Today, the Palestinians in exile number more than 5 million. They are forced to live in complete misery in several refugee camps all across West Asia. This is even as Israeli occupation keeps on displacing more and more people from the villages and towns in the occupied territories of West Bank and Eastern Jerusalem. More than 600,000 illegal settlers are living in these territories. The number of these settlers is increasing every day with more and more Palestinians deprived of their lives, land and livelihoods. A large number of them are forced to live in humiliating conditions and mostly on charity, which deprives them of their right to a dignified life.

What does Nakba mean today?

Prime minister Benjamin Netanyahu wants to annex more occupied territories permanently. Netanyahu and his new coalition partner, Benny Gantz, are competing with each other to grab more and more Palestinian land even if it means the complete annihilation of the people in the occupying territories. Incidentally, Gantz is a former military head who prides himself on “bombing Gaza to stone age” in 2011.

Meanwhile, Israeli defense forces are illegally killing and detaining Palestinians at the slightest excuse. Israel has built a concrete apartheid wall (700 km long and close to 8 m high). The wall divides the West Bank and Eastern Jerusalem into small Bantustans, separating one Palestinian from another, their homes from their work and farms, and forcing them to go through hundreds of checkpoints before they reach their destinations. This is everyday harassment.

Israel is not satisfied with the displacement of people and demolition of their homes. It wants to wipe out all the historical and cultural signs of Palestinian life in Israel and in the occupied territories through destruction and defacement. The Israeli right wing is demanding the demolition of Al-Aqsa and the archaeological sites in the old Jerusalem, which have survived several wars in the past are being gradually reshaped to suit the Zionist historical narrative. These are illegal acts and defy cultural rights of the people.

Israel does not want to recognize Palestinians’ right to return. If they return, Palestinians will outnumber the Jewish population in the territories under Israeli control, a situation Israel is determined to avoid. In fact, it wants to displace more Palestinians to grab more land. The United Nations General Assembly has passed a resolution (no.194 in 1948) and reiterated it every year since, recognizing the Palestinians’ right to return. However, the international community has been unwilling to implement this resolution or make Israel pay for its violation of international laws, norms and conventions. Given this and the state of Israeli domestic politics, it looks very unlikely that the suffering of Palestinians will end soon. What will Palestinians do about it?

For Rolla Abdullah, a 22-year-old Palestinian engineer and an active member of Palestine People’s Party youth wing, Nakba means the everyday suffering of occupation which can destroy her home and deprive her of her future any moment it wants. She says that though it is not easy to live in such constant fear, “she will never leave her home”.

She and her comrades in the youth wing, mostly in the West Bank and Eastern Jerusalem, are organizing a global campaign on the Nakba day this year, asking organizations across the globe to send a message of solidarity that “Palestine will be free”. They are not alone. Several other organizations in Palestine and all across the world have given similar calls to protests. It is because they could not mobilize on the streets due to unprecedented conditions of COVID-19.

Rolla’s fellow Palestinians in Gaza organized the “Great March of Return” in 2018, which continued into 2019. A key demand of these protests was the right to return of the refugees and their descendants. Even though over 200 protesters were killed by Israeli forces, the protests went on. Given the lockdown, such mobilizations were not possible this year. But that does not mean the end of the resistance.

The protests, fueled by the spirit of resistance, will be back on the streets soon as Palestinians like Rolla have resolved to take back what is stolen from them however much times it takes.