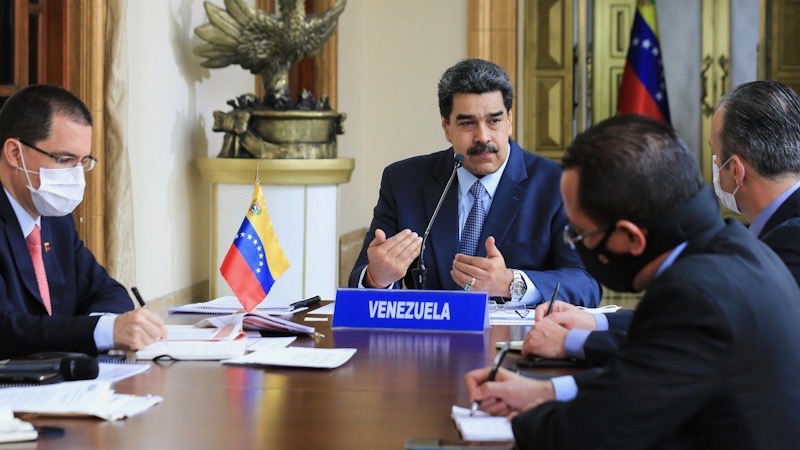 The conference of the ALBA-TCP member countries was called for by the Venezuelan President Nicolás Maduro. Photo: Venezuelan Ministry of People's Power for External Affairs

The member countries of the Bolivarian Alliance for the Peoples of Our America – People’s Trade Treaty (ALBA-TCP) held a high-level virtual conference to address the post-pandemic economics on June 10. The meeting was called for the Bolivarian Republic of Venezuela as a founding member of the regional integration organization.

The main objective of the multilateral meeting was to determine the economic weaknesses and strengths of the member countries after the health crisis caused by the COVID-19 pandemic has been overcome. The conference was also aimed at establishing criteria, proposals and joint strategies to face the regional and global economic challenges in the post-pandemic phase.

The Heads of State and Prime Ministers of Antigua and Barbuda, Cuba, Dominica, Granada, Nicaragua, Saint Kitts and Nevis, Saint Vincent and the Grenadines, and Venezuela, among other left-wing leaders such as Vijay Prashad, the director of the Tricontinental Institute for Social Research, took part in the meeting.

During the conference, the regional bloc reaffirmed their commitment to work together to fight the pandemic and support each other in revitalizing the economies. The member countries rejected the economic sanctions imposed by the US against Venezuela and Cuba and reiterated their solidarity and support in demanding an end to them at the international level. They saluted Cuba’s assistance with medical and nursing professionals in various countries.

Venezuelan President Nicolás Maduro emphasized that the development of the vaccine and treatments against coronavirus should be the priority for all member countries. For this, he called on the members to work in alliance with the World Health Organization (WHO), China, Russia, and the universities that are producing it.

Cuban President Miguel Díaz-Canel urged to promote and strengthen multilateralism and support the management of the WHO and the Pan American Health Organization (PAHO) to coordinate a collective response. He also suggested that in the current situation the governments should promote the financing and development of local food production that guarantees self-sufficiency and reduces dependency on imports.

For the economic recovery of the regional GDP, Alicia Bárcena, executive secretary of the Economic Commission for Latin America and the Caribbean (ECLAC), stressed on strengthening regional integration, strategic and economic alliances and constructing more inclusive and sustainable economies, with less dependency on the outside world.

President Maduro proposed to hold another meeting on June 29. A Joint Council meeting that will bring together the Foreign Ministers and Economic Ministers of the member countries, to give substance to the proposals made during this conference.

The ALBA-TCP was founded on December 14, 2004, as a result of the strategic vision of Commanders Fidel Castro and Hugo Chávez, in order to form a platform for the integration of Latin American and Caribbean nations. The alliance was also the counterpart of the Free Trade Area of ​​the Americas (FTAA), promoted by the United States to impose its economic domination in the region.