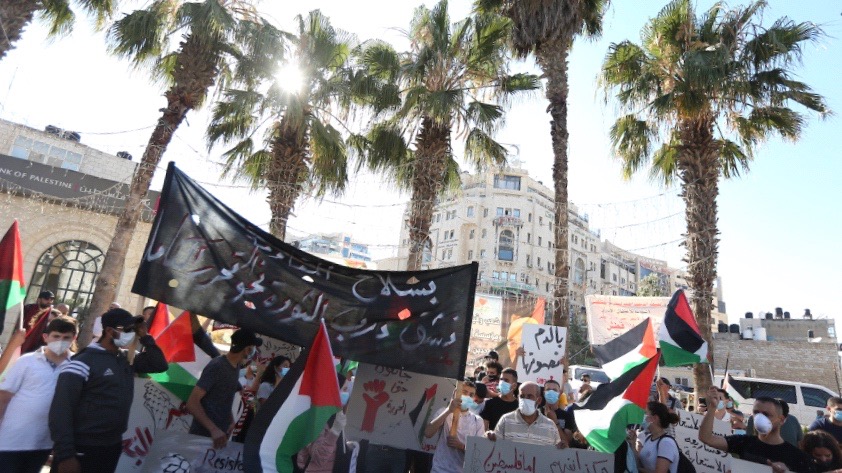 Massive popular protests against the Israeli annexation plan were witnessed across the occupied Palestinian Territories on July 1, Wednesday. Protest demonstrations were held in the occupied West Bank cities of Ramallah, Jericho and Bethlehem, as well as in Gaza city in the besieged Gaza strip. The various Palestinian political parties along with Palestinian activists and civil society leaders had called for a ‘day of rage’ in Palestine and across the world on July 1, against the Israeli plan to annex large parts of the occupied West Bank including the Jordan Valley.

In Gaza city, thousands of Palestinians gathered to express their opposition and condemnation for the annexation plan. Protesters waived Palestinian flags and held up banners and placards denouncing US president Donald Trump and Israeli prime minister Benjamin Netanyahu. They carried posters like, “We Can’t Breathe Since 1948” and “Palestinian Lives Matter”, inspired by the recent Black Lives Matter protests in the US.  Several leaders belonging to the Palestinian resistance group Hamas, as well as other political factions present in Gaza, also participated in the protests and gave speeches.

Saadi Abed of the Palestinian Democratic Union (FIDA), while speaking at the protests, said, “The annexation is a threat to the Palestinians and violates international legitimacy resolutions. The land grab will give away for a new Palestinian intifada.” Abed also urged the Ramallah-based Palestinian Authority (PA) to pursue efforts to “hold Israel accountable in front of the International Criminal Court for its crimes against the Palestinian people.”

In the West Bank, protests were held in the cities of Ramallah, Jericho and Bethlehem. In the Ramallah protests, organized by the Palestinian Samidoun prisoner solidarity network, hundreds of protesters gathered in the al-Manara square in downtown Ramallah, which also included several Israeli politicians and members of parliament from left-wing Israeli parties opposed to the annexation plan. The protesters also carried placards and banners in both English and Arabic condemning the annexation plan as well as calling it a violation of international law. Samidoun in a statement said that these protests “expressed the rejection of Israel’s settlement projects.”

In Bethlehem, a group of young protesters wearing protective masks and gloves assembled in the central ‘cinema’ market to denounce the annexation plan. Many of these protesters had come from far-off Palestinian refugee camps. Ruba Farraj, a 22-year-old resident of Dheisheh refugee camp, was quoted in the Middle East Eye as saying, “We came here today to stand against the US ‘peace plan’ and annexation, and tell the world that we, the Palestinians, oppose these policies. Annexation is just the first step in a policy of ethnic cleansing. Israel wants to clear this land of all of the Palestinians, and take it for themselves. We need to stand up and defend our land. It is shameful if we don’t.”