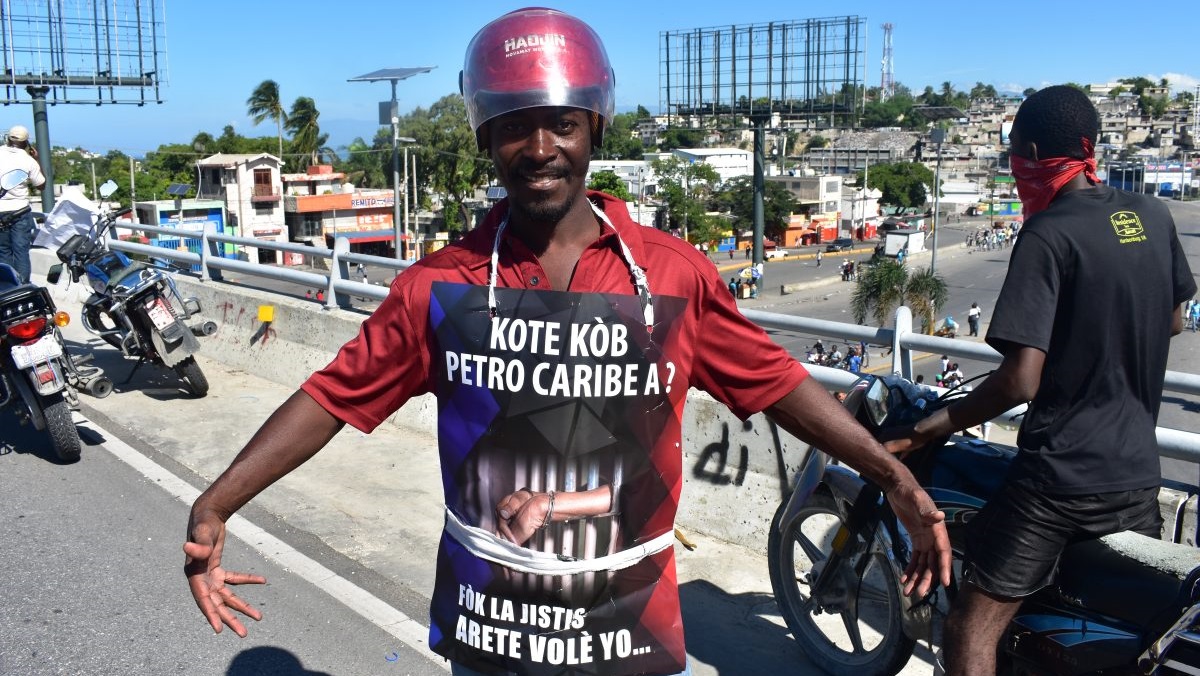 Protesters in October 2018 took to the streets with the question: Where are the PetroCaribe funds?' Photo: ALBA Movimientos

For the past two years, Haitians have been engaged in several waves of mass protests against the corrupt government led by Jovenel Moïse and its anti-people economic policies. While the Haitian government has been unable to meet the most basic needs of the people like clean water, fuel, transportation and food, reports surfaced about the embezzlement of 3.8 million dollars of PetroCaribe Funds by government officials.

The embezzlement of these funds linked to the PetroCaribe Energy Agreement raised many alarms. Within the context of the US-led hybrid war against Venezuela, the corruption allegations linked to PetroCaribe funds were immediately painted as yet another blunder of  Bolivarian Venezuela. However the reality is very different.

In this two-part series, Haitian activist and economist Jean Jores Pierre discusses the history and different components of the PetroCaribe Energy Agreement and what happened in the case of Haiti.

In 2006, Haiti signed one of the most important agreements in its history: the PetroCaribe Energy Agreement.

Today, the national and regional contexts have seriously disrupted this agreement. Haiti is undergoing a severe structural political and economic crisis. The Bolivarian Republic of Venezuela, the key country of the PetroCaribe program, is facing internal turbulence and suffers under unilateral economic and financial sanctions imposed by the United States of America.

The PetroCaribe agreement is in fact at the heart of this out-of-control battle by Washington against Caracas. It is about geopolitics and economics. Uncle Sam lost, around 20 years ago, his absolute control over the oil and other natural resources of Venezuela. This article seeks to look at what is often not said about the Petro Caribe agreement, which is one of cooperation based in solidarity. In this context, the article examines the various kinds of manipulation that embody the strategies of imperialist domination.

Since 1999 [following the victory of Hugo Chavez], Venezuelan society has taken another direction. Deep changes were carried out in the political, social, economic, and cultural life of the Latin American giant under the Bolivarian Revolution. The PetroCaribe Energy Agreement falls into this same line of changes of direction of Venezuelan society, a sociopolitical phenomenon deliberately ignored by many.

The prestige of Venezuela manifested in the PetroCaribe Energy Agreement

PetroCaribe is an energy agreement signed by 18 countries of the Caribbean, including Haiti. It is an important element of the foreign policy of the Bolivarian Republic of Venezuela. This agreement is a symbol of the geopolitical deployment of Venezuela in the region, with a focus on the shared history, common destiny and the social development of the peoples of the Caribbean. The principal objective is to contribute to energy security, socio-economic development and the integration of Caribbean countries through the sovereign use of energy resources. The program is based on the principles of integration of the Bolivarian Alliance for the Peoples of Our America (ALBA) – unity, solidarity, cooperation, complementing, and integration with a view from the South.

ALBA has a different perspective on integration which tends towards the construction of socialism and the resolution of social problems that affect the people. This differs from the Integration Agreements of imperialist countries that work towards integration of the markets in favor of transnationals and large powers. In fact, Venezuela puts its resources at the disposal of the countries in the region and opts for a process of harmonious development of the Caribbean nations. This challenges the unequal terms of exchange and the competitive logic that favors domination, exploitation and underdevelopment of the Global South countries.

PetroCaribe represents an important turn in the contemporary history of international cooperation. The “developed” countries use different NGOs or development mechanisms that are created to administer funds for a country “destined for development.” For example, the US has created United States Agency for International Development (USAID) that intervenes in Haiti. The dozens of years of presence of USAID in Haiti implies billions of dollars spent on negative balance while very often actually worsening the problems it sought to solve. It would seem that the subcontracting of US interventions in Haiti by NGOs does not affect Washington. However, PetroCaribe which contributes to the strengthening of the capacity of the State is attacked by all sides. Meanwhile, no attention is paid to the mechanisms and ways of management of USAID,

What is true [for imperialism] is that it is necessary to bring down all of the measures of Venezuelan defiance put in place by President Hugo Chávez who created the PetroCaribe agreement. This Venezuelan defiance had managed to isolate the US from the regional stage. For 10 years, Uncle Sam had serious difficulties in imposing his orders even on the Organization of American States (OAS), a regional organization known to be the Trojan horse of US imperialism in the region. Furthermore, President Chávez had proposed the creation of several regional organisms without the participation of the US such as UNASUR (Union of South American Nations), CELAC (Community of Latin American and Caribbean States) and ALBA (Bolivarian Alliance of the Peoples of Our America).

Today the Bolivarian Republic of Venezuela is attacked and harassed by powerful groups that project a distorted image of the sociopolitical reality of the country. This battle has a powerful ally: the mainstream media. During the second decade of the 21st century President Nicolás Maduro is the most-attacked figure in the Americas. He has been incorrectly described as a dictator and an authoritarian figure.

The model of participatory democracy or direct democracy of Venezuela has not been taken into account by the detractors of the Bolivarian Revolution. The PetroCaribe Agreement assumes this same spirit of Bolivarian democracy: allow for the people to decide their destiny, without impositions. As such, discrediting the PetroCaribe Agreement constitutes giving support to the planned attacks against the Venezuelan people who have decided to free themselves of US imperialist domination and of their coup-promoting embassies.

At the national level, the Haitian government led by Jovenel Moïse has decided to join the policy of the US against Venezuela. In Haiti, the battle against the spirit and the heart of the PetroCaribe program has already been unleashed. The current regime wages this battle against Venezuela, ignoring the socio-economic problems in Haiti itself. The Haitian population is facing a record devaluation of the gourde, the national currency, against the US dollar (US $ 1.00 = 117.00 gourdes). Amid the refusal of Haitian authorities to lower the prices of fuel, the lack of access to drinking water, the lack of investment, the poor management of the electrical sector, etc. the PetroCaribe Agreement and the fresh money that circulated are no longer available to contain this important fall of our economy. This all leads us to believe that the diplomatic quagmire supported unilaterally by the Haitian government against the Bolivarian government will last until the end of Moïse’s mandate.

Fortunately, the Haitian people are not ready to renounce these beautiful pages of the noble history shared between Haiti and Venezuela. The recent protests seeking the truth about the mismanagement of PetroCaribe funds by corrupt officials are is telling. They have directly accused the Haitian public servants who siphoned off billions of dollars of the PetroCaribe funds that should have been invested in socio-productive funds with the objective to better the conditions of life of the Haitian people.

The PetroCaribe energy agreement is the result of the genius of Fidel Castro and Hugo Chávez, two great statesmen who made their mark in the history of humanity with their contributions in terms of new methods and a methodology for international cooperation, among other aspects. This agreement was created after the founding of ALBA that brings together 11 countries and governments in the heart of the ALBA-TCP (Bolivarian Alliance for the Peoples of Our America – People’s Trade Agreement) and also the hundreds of social movements and organizations that are part of Social Movements of ALBA.

Haitian social movements such as PAPDA (Haitian Platform for Alternative Development), the MPP (Peasant Movement of Papaye) and the TK (Tèt Kole Ti Peyizan Ayisyen) began the first discussions about the necessity to include Haiti in the energy agreement. President Hugo Chávez initially did not want to include Haiti because he was against the 2004 coup which deposed President Jean-Bertrand Aristide. This agreement was signed between Haiti and Venezuela in 2006 while René Garcia Préval was president. The agreement took effect in 2009. Haiti used the PetroCaribe funds to finance different development projects between 2009 and 2018.

The PetroCaribe Agreement does not represent a pretext for Caracas to meddle in the internal policy of countries. The conditions of this energy agreement are linked to good governance, transparency and democracy. Haiti adhered to these parameters adopting program documents, action plans and projects elaborated by its government. It signed decrees in Ministerial Councils to give a legal character to the expenses of the funds, carrying out sessions of “Gouvènman Lakay” (The government is in your home) to justify the participation of communities in the projects. There were also reports and articles published in the press that spoke about embarking on projects that would have cost the Haitian people millions of dollars. All of these maneuvers ended up being tricks. But throughout the process, Venezuela never dictated or imposed projects or mechanisms of local management to the successive governments in Haiti. There is in fact proof of the opposite, that the squandering of the PetroCaribe funds is solely and completely the responsibility of the Haitian functionaries.

Haitian institutions and authorities administer the funds from the PetroCaribe Agreement. The authorities, however, pocketed these funds instead of using them to improve the conditions of the people. However the PetroCaribe Energy Agreement signed by 18 countries in the Caribbean region continues to be a successful experience. For example, during the financial crisis of 2007-2008, the finance market was so deeply affected that the possibility of taking out a loan was limited. However, countries of the Caribbean were able to resist this global crisis and due to the PetroCaribe program, several countries in the region even strengthened their economies. The Dominican Republic is a significant example. The corruption of some authorities and Haitian leaders can not tarnish the image of this historic program of regional cooperation put forth by Commander Hugo Chávez.

Jean Jores Pierre is a Haitian economist with a masters in Social and Solidarity Economy. He collaborates since 2009 with the Haitian Platform for the Defense of Alternative Development (PAPDA). Through his work with PAPDA, he participates in political education activities with other Haitian social movements organized with the Peasant Platform 4G (MPP, MPNKP, TK y CROSE).

Translation from French to Spanish, Henry Boisrolin, and to English, Peoples Dispatch.