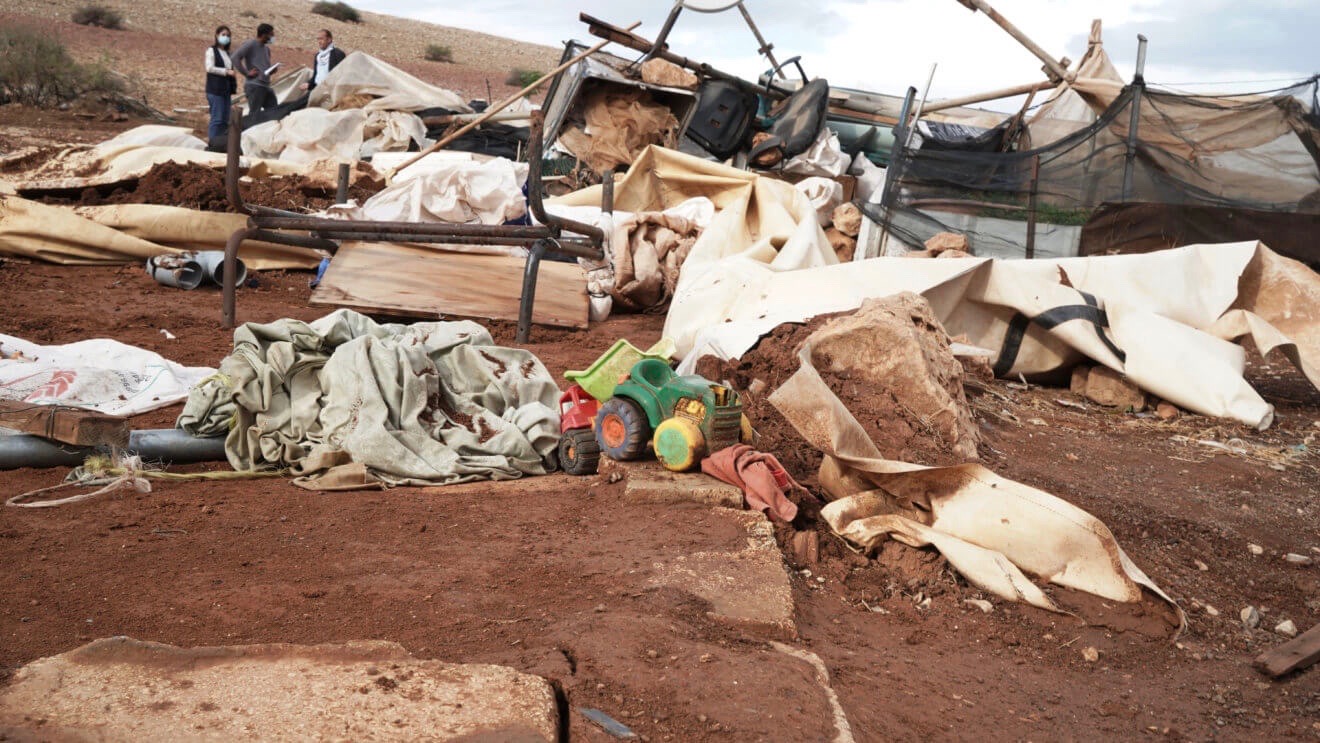 The Israeli military demolished the entire Palestinian village of Khirbet Humsa in the northern Jordan Valley in the occupied West Bank late night on Tuesday, November 3. It was reportedly one of the largest illegal demolitions carried out by the state of Israel in the occupied Palestinian Territories (oPT) in the last decade. The demolition has left close to 80 Palestinians from the Bedouin herding-farming community displaced and homeless. 41 among them are children, according to the United Nations (UN).

Human rights organizations and Palestinian leaders, including Palestinian Authority prime minister Dr. Mohammed Shtayeeh, have accused Israel of deliberately carrying out the massive demolition operation at a time while the entire international community is preoccupied with the US presidential elections.

As per news sources, Israeli military vehicles, accompanied by six bulldozers and excavators, invaded the Khirbet Humsa village in a sudden night raid on Tuesday.  The village residents had received no advance notice by the Israeli military authorities. More than 100 Israeli soldiers were part of the operation which destroyed a total of 76 Palestinian structures, including many which had received financing from the European Union (EU) and other EU governmental and non-governmental organizations.

Israeli human rights organization B’Tselem reported that the demolished structures included 18 makeshift tents and shacks used as living shelters. More than 30 tons of livestock fodder was also destroyed by the Israelis. The Israeli forces took away two tractors and another vehicle belonging to three village residents during the operation. Villagers were seen going through the damaged and mangled wreckage of their property and belongings in the aftermath of the demolitions.

B’Tselem’s international advocacy officer, Sarit Michaeli, tweeted that “The last time Israel demolished an entire herder community was 7 years ago. Clearly, the intention is to force residents off the land by creating a man-made humanitarian disaster. But residents have told us they have nowhere to go.” She also noted in another tweet that more Palestinians in the occupied West Bank have been displaced and rendered homeless by the state of Israel in the first 10 months of 2020 than the annual figure in any year since 2016. 690 Palestinian structures have been demolished by Israel in the first 10 months of 2020, displacing close to 900 Palestinians, including 404 children. This figure stood at 677 in 2019, 387 in 2018, and 521 in 2017.

The UN expressed concern for the displaced Palestinian families, with the UN humanitarian coordinator for the oPTs, Yvonne Helle, calling the nomadic Bedouin Palestinian communities “some of the most vulnerable communities in the West Bank.” She added that this was the largest forced displacement incident in the last four years in terms of the number of Palestinians displaced in just one demolition. It was also the largest in terms of the number of structures destroyed.

The demolished structures were situated in a part of the occupied West Bank demarcated by Israel as Area C, which is under full Israeli military and administrative control. Area C comprises approximately 60% of the occupied West Bank territory, with Area A (18%) and Area B (21%) making up the rest. Palestinians exercise civilian and internal security control only in Area A, while the Israeli military has total external security control over all the three areas.

The Israeli civil administration in Area C, which falls under the Israeli military, has justified the demolitions by claiming that the Bedouin structures were built illegally without obtaining Israeli building permits, and were situated in the Israeli army’s firing zone, purportedly reserved as an army training area.

Human rights organizations accuse Israel of using the lack of permits as an excuse to demolish Palestinian structures and confiscate Palestinian land, which is often used towards construction of new illegal settlements or expansion of existing ones. In this manner, Israel has displaced hundreds of Palestinians over the years. The recent normalization deals between Israel and some Arab countries have also not affected Israel’s demolition activity. Repeated appeals by the UN, EU, and others to Israel to cease such activities which are detrimental to the prospects of long term peace and a two-state solution have also been ignored.