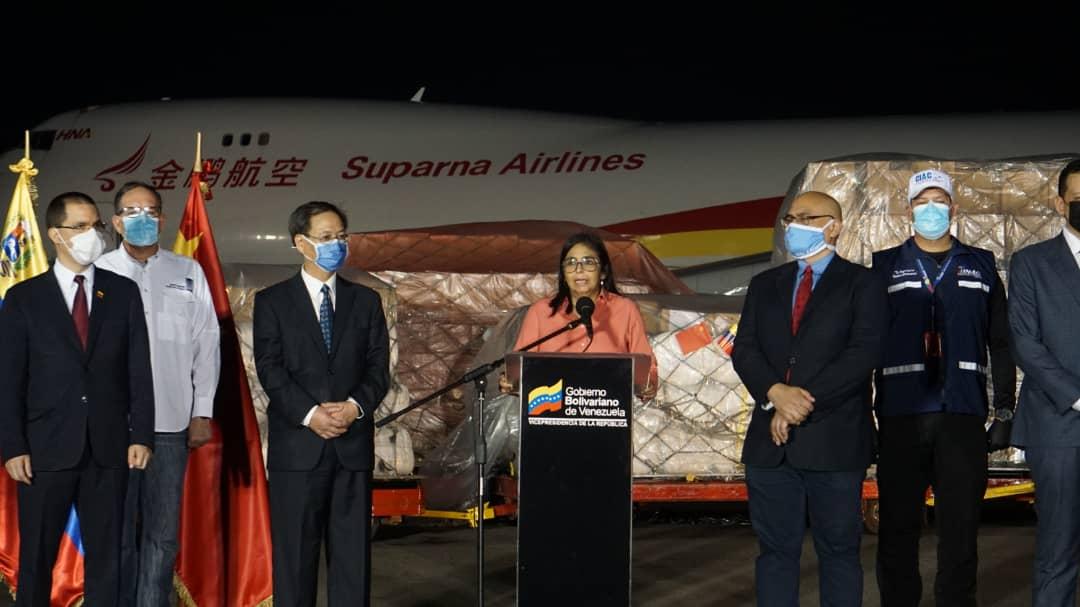 Venezuelan president Delcy Rodríguez stands with representatives of the Chinese government to welcome the 6th plane with of humanitarian aid from China to Venezuela to fight COVID-19. Photo: Foreign Ministry of Venezuela

In mid-January 2020, 800 people gathered at Mexico’s Ministry of Economy to celebrate “China Day” with a seminar on Chinese-Mexican relations. Mexico’s Minister of Economy Graciela Márquez Colín, who has a PhD in economic history from Harvard University, said, “China and Mexico have to walk together, to build a stronger and more solid relationship.” In July 2020, the United States-Mexico-Canada Agreement went into force. At the January event, Márquez Colín said that despite this agreement, Mexico must “redouble its efforts” to draw investment from other places, such as China.

Zhu Qingqiao, China’s ambassador to Mexico, said that his country agrees, and has “many plans to invest in Mexico,” including the $600 million needed by the state-owned Dos Bocas petroleum refinery in Tabasco; this money was put together by the Industrial and Commercial Bank of China, the Bank of China, and other international partners.

On June 4, 2019, just after he arrived in Mexico City, Ambassador Zhu wrote an opinion piece in a leading financial newspaper, El Financiero. “The trade war,” he wrote, “will not stop China’s development. Faced with risks and challenges, China has the confidence to face them and turn them into opportunities.” The US-China economies, he noted, are highly integrated, which will make decoupling next to impossible. Meanwhile, China is prepared to increase its interaction with other countries, both through investments into those countries—such as Mexico—or by welcoming investment into China. China, he wrote, is not the author of this “trade war,” and China would like this conflict to end.

Over the past two decades, China has emerged as one of the most important markets for Latin American countries. For example, in 2019, 32 percent of Chile’s exports went to China, 29 percent of Peru’s, 28 percent of Brazil’s, 27 percent of Uruguay’s, and 10 percent of Argentina’s. The mutual reliance of China and Latin America has meant that despite changes in regime, neither China nor the Latin American governments have disrupted this relationship. When Jair Bolsonaro was president-elect of Brazil, he flirted with Taiwan before coming to power; but once he was in office, the economic imperatives made any break with Beijing impossible. Far too much remains at stake. In November 2019, Bolsonaro met with Chinese President Xi Jinping, who said that China and Brazil will increase their trade “on an equal footing.” Tsung-Che Chang of the Taipei Economic and Cultural Office in Brazil conceded in September 2020 that there are “many barriers” for Bolsonaro to break with Beijing. Brazil simply does not have the latitude that Australia has, since Australia—reliant upon the Chinese market—nonetheless joined with the US in a military alliance against China known as The Quad (along with India and Japan).

After the election victory in Bolivia of Luis Arce’s Movement for Socialism (MAS), Chinese President Xi sent Arce a message of congratulations. In that message, President Xi recalled the 2018 strategic partnership agreed upon by the Chinese government and the then President Evo Morales. That partnership led to the choice of China’s Xinjiang TBEA Group to hold a 49 percent stake in a planned joint venture with Bolivia’s state lithium company YLB. “Why China? There’s a guaranteed market in China for battery production,” Morales said at the signing ceremony. Bolivia’s new president Arce was Morales’ head of economic policy; he has signaled that he would continue the policy of cooperation with China, particularly in the context of the pandemic. There is no indication that Chinese investment will be slowed, certainly not to Bolivia.

Finally, on the political front, China has indicated in various diplomatic forums that it will provide a shield as much as possible to prevent regime change operations against Cuba and Venezuela. China and Russia have openly spoken out against the US unilateral sanctions against Venezuela, and the Chinese government is currently holding talks with Venezuela about a new oil-for-loan deal. China maintains very close ties with Cuba; when Fidel Castro died in 2016, President Xi went personally to the Cuban embassy in Beijing to pay his respects by bowing three times (Fidel is the only foreign leader who has received this treatment).

US Pressure on Latin America

In September 2019, Trump’s daughter Ivanka visited Argentina. She traveled to Jujuy, which is toward the border with Bolivia. Ivanka Trump came there with John Sullivan (then deputy secretary of state) and other members of the US government (from the Defense Department and from USAID). She met in Purmamarca with Jujuy Governor Gerardo Morales, and then alongside David Bohigian of the US government’s Overseas Private Investment Corporation (OPIC) announced $400 million toward road construction along what is known as the “lithium route” (Argentina, with Bolivia and Chile, form the “lithium triangle”). This was widely seen across the border in Bolivia as a statement about the MAS orientation toward China.

Bohigian transitioned OPIC into its current incarnation as the International Development Finance Corporation (DFC). The DFC’s project—América Crece—is directly designed as a challenge to Chinese investment in Latin America and the Caribbean. In September 2020, US Secretary of State Mike Pompeo was in Guyana, where he championed the investment of ExxonMobil and other oil companies into the South American country. Pompeo said that Guyana should make a deal with US oil companies, which—he claimed—are not corrupt; “You look at that,” Pompeo said in reference to their record, “and then look at what China does,” implying that Chinese firms are corrupt and that a country like Guyana should shun China.

On April 26, 2019, Kimberly Breier, the assistant secretary for the Office of Western Hemisphere Affairs in the US State Department, made a full-fledged attack on Chinese investment in Latin America and the Caribbean. The Chinese, she said, came to the continent with “bags of cash and false promises”; she made sly allegations, but did not back these up with any factual examples.

In September 2020, Luz María de la Mora, a senior official in Mexico’s Ministry of Economy, said that China is a “great example” for Mexico. China, she said, is a “partner to boost our economic recovery” and help Mexico “emerge from the pandemic as soon as possible.” No doubt that the United States is and will be for a long time Mexico’s largest trading partner; but the new affinity between China and Mexico, particularly because of next year’s anticipated economic growth in China, is also important. Despite pressure from Washington, and there is no indication of a major change when Joe Biden becomes president in 2021, these Latin American countries such as Mexico know that they cannot break with China; that would be reckless.

John Ross is a senior fellow at Chongyang Institute for Financial Studies, Renmin University of China. He was formerly director of economic policy for the mayor of London.