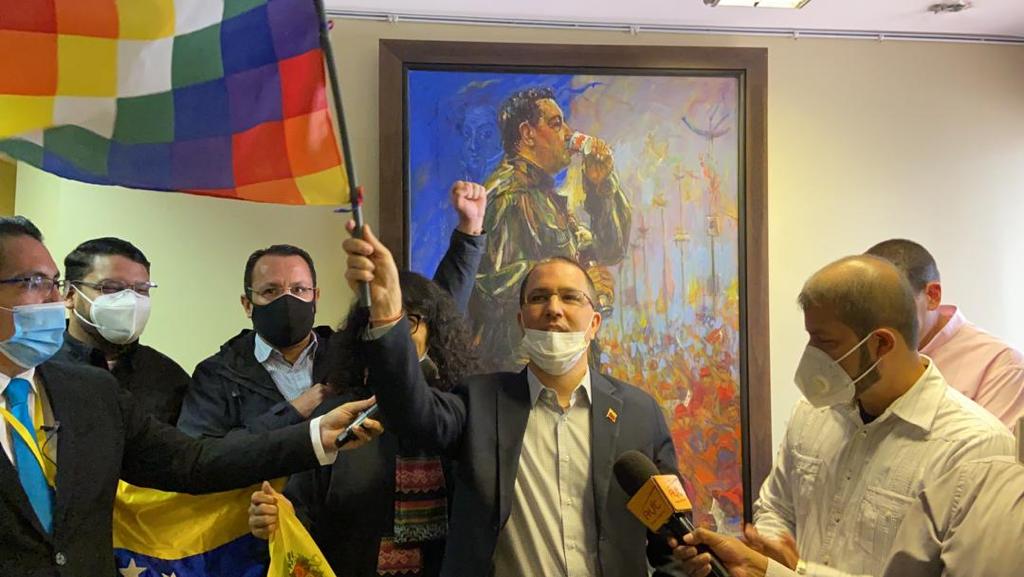 A delegation headed by Venezuelan foreign minister Jorge Arreaza, on November 9, recovered the embassy occupied by the envoys of opposition leader Juan Guaidó in La Paz, Bolivia. Hundreds of members of various Bolivian social movements and political parties gathered around the embassy in support and solidarity with the Venezuelan people and accompanied the delegation in the recovery of the headquarters of their diplomatic mission.

In a video published by the Venezuelan Ministry of People’s Power for External Affairs, Arreaza was seen entering the embassy, removing a photograph of Guaidó and putting up in its place a painting of Liberator Simón Bolívar. In another video, he was observed hanging a painting of Commander Hugo Chávez, former Venezuelan president and the founder of the Bolivarian revolution.

In November 2019, after the US-backed coup against former Bolivian president Evo Morales, the coup-appointed interim president Jeanine Áñez broke diplomatic relations with the legitimate government of president Nicolás Maduro, recognized Guaidó as the head of the state and expelled all diplomatic personnel from the country. Thereafter, a group of unknown people violently entered and seized the Venezuelan embassy, vandalized and stole its property, and forced the departure of those who were present there.

After the inauguration of Luis Arce and David Choquehuanca of the Movement Towards Socialism (MAS) as the president and vice-president of Bolivia on November 8, the new Bolivian government restored diplomatic ties with the government of president Maduro and recognized it as the sole legitimate authority in Venezuela.

On November 8, president Maduro announced that he had appointed the vice minister for multilateral issues, Alexander Yáñez, as the new ambassador to Bolivia. He had also sent a letter to the Bolivian government requesting permission for Yánez.