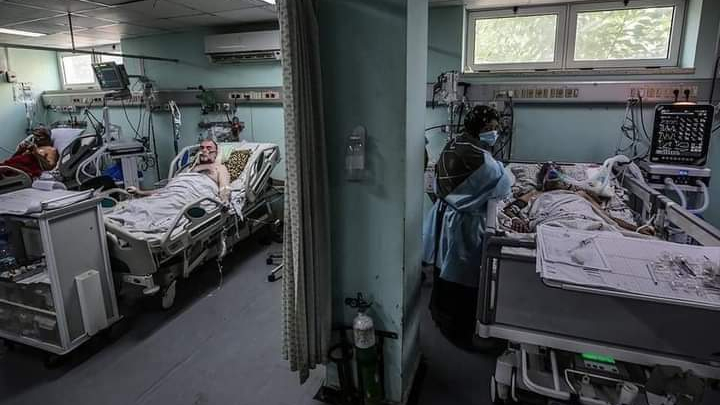 COVID-19 patients in the intensive care unit at the European Gaza Hospital.

The COVID-19 situation in Palestine remains grim as a lockdown continues in areas of the West Bank while Gaza saw a 48-hour lockdown over the weekend.

Palestinian authorities in both the occupied territories have been dealing with a multitude of problems that have been hampering their efforts to combat the pandemic, including severe financial difficulties and shortages in vital healthcare equipment such as testing kits. Latest  statistics from Tuesday, December 15, stated that a total of 126,205 COVID-19 cases have been recorded in the occupied Palestinian territories, with the death toll currently at 1,107.

Gaza, which is under crippling air, sea and land blockade by the state of Israel, was already under night curfew since August this year. The Hamas Interior ministry in a statement had said that until Sunday, December 13, all shops would be closed with the exception of pharmacies and the more than 2 million residents of Gaza would be barred from leaving their homes except for health reasons. The ministry of health reported more than 500 COVID-19 cases daily in Gaza in the last few days, with the total number of cases crossing 27,000 with more than 175 deaths. As part of Gaza’s lockdown measures, police and security forces were deployed to implement the curfew, with each of Gaza’s districts being separated and divided into blocks for better implementation of lockdown.

Last week health officials revealed that medical facilities in Gaza had run out of COVID-19 testing kits. A day later the World Health Organization provided the authorities with 19,500 COVID-19 testing kits, which are estimated to last for only the next eight days. Gaza’s healthcare system and infrastructure, very badly depleted and damaged due to the Israeli blockade and the three Israeli military assaults on the territory, was already operating under the immense strain of catering to one of the most densely populated areas on earth. Even before the pandemic, thousands of grave injuries and medical emergencies many of which were the result of regular Israeli attacks on civilians in Gaza, were taking a big toll on the capacities of the public health system.

The Palestinian Authority prime minister, Mohammed Shtayyeh, said last week that the governorates of Nablus, Hebron, Tulkarem and Bethlehem will be completely closed for seven days starting December 10. During the period, only the transportation of agricultural products, essential services and medical supplies will be allowed. All travel within and between the eleven governorates will be barred. Authorities have also stipulated a penalty of a 1000 Jordanian Dinars ($1400) for anyone who breaks the lockdown, according to the spokesperson for the interior ministry, Ghassan Nimer. The occupied West Bank and East Jerusalem as of Tuesday, December 15, have together recorded close to 99,000 COVID-19 cases with close to a 1,000 deaths.