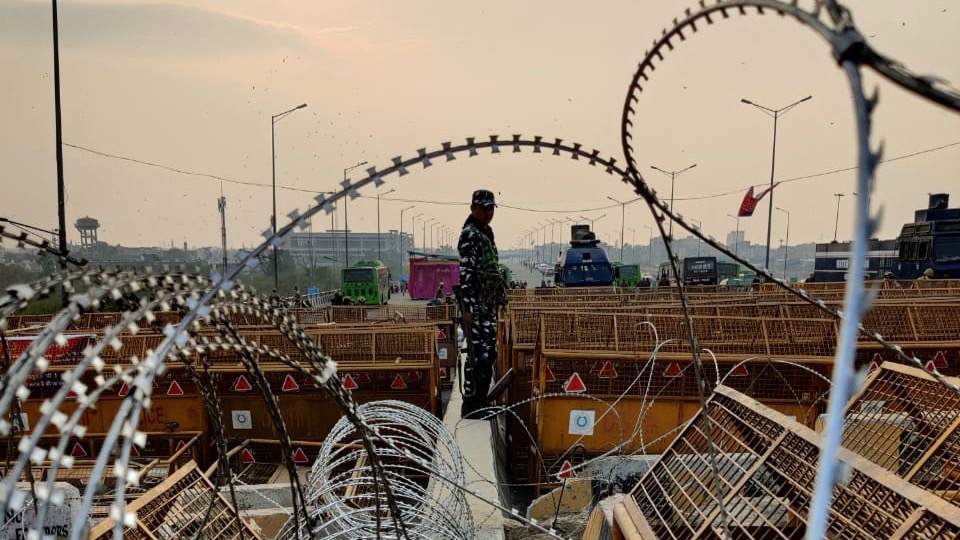 Barricade erected by authorities at the Ghazipur border of Delhi where hundreds of farmers have been camped out for the last two months. Photo: Aditi S

Media organizations across India and internationally have denounced the latest attack on press freedom in the country following a raid on the office of Newsclick, a progressive online news portal based in the capital New Delhi. The raid began at 10 am on February 9, and is still ongoing at the time of this publication (Editors note, late on the night of February 9 the raid concluded at the Newsclick office yet still continues at Prabir’s house). Newsclick has stood out in recent months for its consistent reporting on the ongoing farmers struggle against the pro-corporate farm laws passed by the far-right BJP-led government in India.

The residences of its editor-in-chief Prabir Purkayastha, editor Pranjal and human resources head Amit Chakraborty were also raided. According to media reports, the Enforcement Directorate (ED), the intelligence agency of the ministry of finance in charge of dealing with economic fraud, raided the media organization and the residences of its stakeholders in connection with a money laundering case.

Dr. Ashok Dhawle, the president of All India Kisan Sabha (AIKS), which is one of the major farmers’ unions involved in the ongoing struggle, joined the dozens of progressive voices condemning the raid. “Newsclick has done excellent objective reporting on the ongoing farmers struggle and on all just and legitimate people’s movements over the last few years,” he wrote. “This is nothing but the BJP central government’s attempt to penalise Newsclick for standing firmly with the fighting people.”

“The Indian authorities’ response to protests has focused on discrediting peaceful protesters, harassing critics of the government, and prosecuting those reporting on the events,” according to Meenakshi Ganguly, the South Asia director at Human Rights Watch.

The raid takes place in a moment of increased attacks on critical voices in Indian media. Mandeep Puniya, a freelance journalist writing for the The Caravan whose chief editor has been charged with sedition, was arrested on January 30 while he was reporting on the ground from Singhu, on Delhi-Haryana border, where hundreds of thousands of farmers have been camped in protest. Puniya reported that he was tortured after being detained by the police.

On his release from Tihar Jail in Delhi, he published an article about the farmers in prison, who showed signs of torture on their bodies. According to the Hindustan times, “Delhi Police have filed 44 FIRs and arrested 122 people in connection with the violence at the tractor rally.” The Samyukth Kisan Morcha, an umbrella organization of more than 400 farmers unions, has alleged that the government had planted agent provocateurs who triggered the said violence.

Paranjoy Guha Thakurta, a veteran investigative journalist currently working with Newsclick, was served with an arrest warrant last month by a court in the state of Gujarat in connection with two of his previously published articles in 2017, titled ‘Did the Adani Group Evade Rs 1,000 Crore in Taxes?’ and ‘Modi Government’s Rs 500-Crore Bonanza to the Adani Group.’

Gautam Adani, the owner of corporate Adani group, is considered by the farmers’s movement as one of the major beneficiaries of the controversial farm laws and is also one of the wealthiest persons in India, ranked globally on the 155th position on Forbes billionaires list. In the articles, Paranjoy presents evidence revealing alleged favors doled out by the government led by Prime Minister Narendra Modi to the Adani group.

These articles were originally published in the reputed journal, the Economic and Political Weekly, but were taken down after a defamation notice was sent by the Adani group. Meanwhile, a progressive media house, The Wire, which had republished the articles, has refused to take them down.

In response to the raid on Newsclick, numerous independent media organizations and progressive mass organizations in the country have expressed solidarity and criticized the ham-handed behavior of the government.

Chief Editor of The Wire, Siddharth Vardharajan, tweeted, “Sedition cases, UAPA [Unlawful Activities (Prevention) Act, which is to be used against terrorists threatening the sovereignty of India], FIRs for 153, 505, etc, frivolous defamation suits and now ED raids, this is how the government handles India’s independent media. @newsclickin is the latest target…”

The Delhi Union of Journalists (DUJ) in a statement condemning the raid said, “Newsclick has been providing a platform to leading investigative journalists like Paranjoy Guha Thakurta and bold video journalist Abhisar Sharma, P.Sainath – among others. It has also been reporting extensively on the farmers’ agitation for the past two months. It has established itself as a different voice with news and analysis of national and international affairs.”

In a statement signed by journalists and media projects from Brazil, Argentina, the US, South Africa and Ghana, they condemn the harassment of Newsclick and stated, “The detention of its editors and the smearing of its reputation in the press is a calculated move to intimidate coverage of the farmer’s revolt and other mass struggles that are ongoing in India. We stand with Newsclick, journalism with a spine.”

The Democratic Youth Federation of India (DYFI), one of the largest progressive youth organizations in the country has said in a statement that the raid is but among “the usual ways of the Central Government to suppress all those who refuse to be their tools. Newsclick has fearlessly reported truth from the ground. These raids are (an) obvious effort of intimidation with the aim to scare-off Newsclick from exposing the BJP Government and reporting on people’s  struggles. Newsclick has effectively reported on the ongoing farmers’ struggles and all struggles of working people worldwide.”

“The govt is using the typical tactic of ED raids to scare media houses.. This is directly linked to their unbiased coverage of the Farmers Protest. Check their latest video on the Protests,” tweeted the Delhi state committee of the Students’ Federation of India (SFI).